This morning in Conversations (our daily video where the entire Jaguar research team provides commentary on the market and individual stocks), I very briefly spoke about Intercontinental Exchange (ICE) and the tailwinds the company is seeing within its non-core energy products.

It should also be noted that earlier today, as highlighted in JaguarLive, someone stepped in and bought a block of 2,250 January 130 Calls for $1.80, approximately a $400,000 bullish bet on 6.9x daily average call volume. 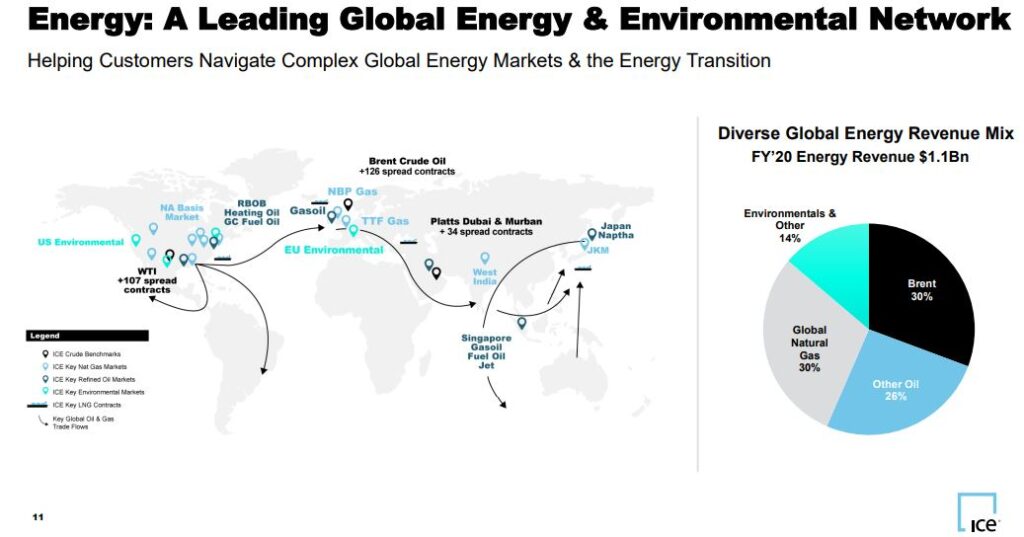 However, JPMorgan was out with a note this week highlighting that while the products they most associate with ICE Energy and ICE’s growth have been stagnant in recent years, ICE’s oil business continues to generate revenue growth driven by what they would consider to be ‘non-core’ Oil contracts.

“Dutch Gas open interest growth has been a key driver of increased Dutch gas trading activity. OI is up nearly 30% in 2021 to 3.2mn contract, following a 15% rise in 2020. This growth has made Dutch Gas one of ICE’s biggest contracts as measured by open interest. Here, the European Natural Gas market has evolved and is migrating from the OTC market to the listed future market, helped by both Endex’s acquisition by ICE as well as the transition from nuclear to gas following the Japanese nuclear power plant meltdown in 2011. When ICE purchased Endex, Dutch Gas was 15% was traded in the futures market. That has grown to ~50% currently.”

Meanwhile, while Dutch Gas Open Interest has been on the rise, Dutch Gas volume is growing even faster. In this instance, volume is up 35% so far in 2021 after a nearly 50% increase in 2020. While higher open interest is a contributor to the volume growth, trade velocity is also increasing. “Here, as European gas markets become more liquid and the depth of book grown, we are seeing more trading done electronically in the futures markets. Here, trade velocity has tripled since 2013 following ICE’s acquisition of Endex as seen in Figure 8. However, we see the opportunity for velocity to increase even further. A look back at the US Natural Gas market shows that trade velocity for ICE was as high as 10.25%/OI/day prior to fracking and capped US Natural Gas prices, suggesting velocity could increase 25% more from current levels. As that level, volumes would be nearly 200k contracts traded per day.” 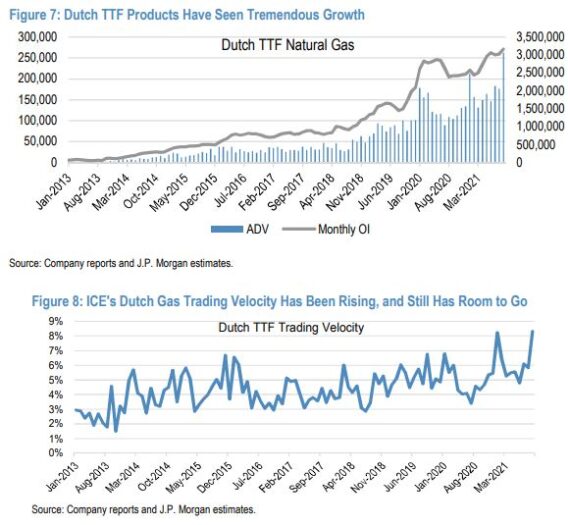 Moving along to ICE’s carbon trading business, which JPMorgan says is also showing healthy growth. This business has been accelerating in recent months due to both economic growth that continues to recover following the COVID-19 pandemic and due to concerns over climate change. ICE acquired The Climate Exchange in 2010, having already worked closely with the company providing the trading backbone and much of its back-office functions. While initially the acquisition was hampered by the economic slowdown that accompanied the Global Financial Crisis in 2007/2008 and drove oversupply of ICE carbon credits causing carbon contract prices to decline too low to affect the environmentally friendly behavior desired by the EU, the European Commission put together a program to take carbon credits out of the market to support pricing. Since then, carbon pricing has been on the rise, and trading volume and open interest have risen in tandem.

“As we saw with Dutch Gas, volume and open interest have been on the rise for ICE’s Emissions products. Emissions open interest steadily climbed over the last four years, and is up nearly 40% in 2021 to 2.8mn contracts. This follows an 8% rise in open interest in 2020. While emission velocity has risen, the steep ascent of volume activity relative to OI seen with Dutch TTF is not as pronounced for Emissions. Here, volume is up 33% so far in 2021 after a 29% increase in 2020. In Figure 10 below, we show Emissions Volume and Open Interest growth over the eight years.” 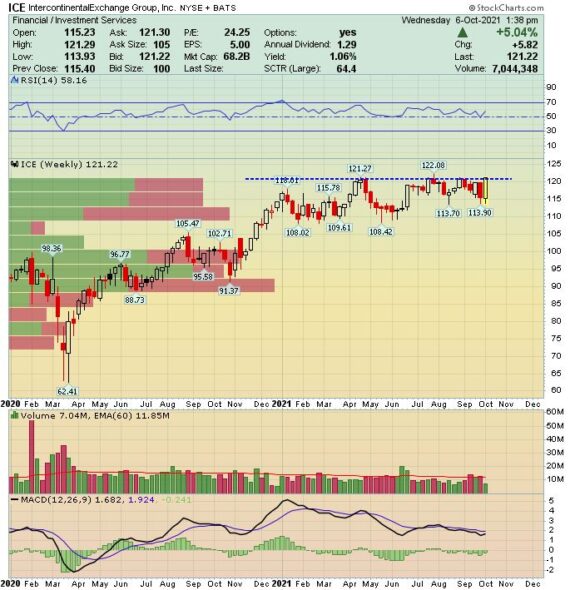