Pulmonx (LUNG), which debuted on October 1st, is a medtech company providing a minimally-invasive treatment for severe emphysema patients. Emphysema is a form of chronic obstructive pulmonary disease, or COPD, and accounts for approximately 25% of all COPD patients. It is a debilitating and life-threatening disease that progressively destroys lung tissue, resulting in a diminishing ability to breathe and engage in the most basic daily activities, leading to a high mortality rate. In the U.S., COPD is the third leading cause of death behind heart disease and cancer and has direct medical costs reaching $50B annually. 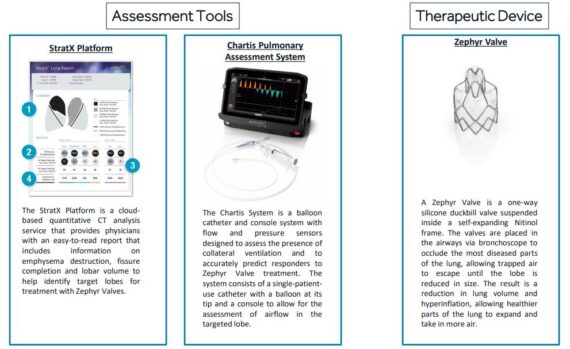 In the U.S., there are roughly 3.8 million patients diagnosed with emphysema with roughly 40% or 1.5 million patients falling under the severe emphysema category. Within this 1.5 million pool, analysts believe approximately 500,000 patients are candidates for Zephyr procedures based on the technology’s current FDA indication for limited to no collateral ventilation and co-morbidity exclusions. Meanwhile, outside the US, analysts believe there are another 700,000 eligible Zephyr patients. Thus, this global patient pool represents a total market opportunity of approximately a $12B.

The following image shows the four sizes of Zephyr Valves:

Per it’s S-1 filing, when discussing the treatment, physicians will select the optimal valve size for each airway to be treated using an EDC that includes sizing wings and depth markers, which allows the physician to perform quick and accurate sizing. Once deployed, the valve is held in place by the radial expansion force of the housing. Typically, multiple valves are used to obstruct all airways leading to the target lobe. In clinical studies, an average of four valves per patient were used. 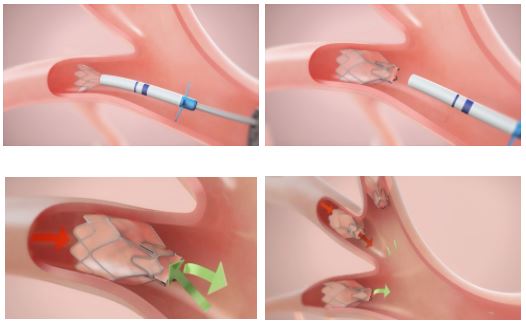 To date, over 100 scientific articles on Zephyr Valve benefits have been published including randomized controlled trials, meta-analyses, review articles, cost effectiveness analyses and risk-benefit analysis. In 2018, LIBERATE study results were published in the American Journal of Respiratory and Critical Care Medicine and served as the basis for the Zephyr Valve’s FDA approval. Per Stifel, “LIBERATE was a multi-center, multi-national randomized controlled trial in 190 patients with heterogeneous emphysema and little to no collateral ventilation at 24 sites across four countries. The study was randomized 2:1 with Zephyr vs. standard of care with 12-month follow up in both treatment and control arms. All primary and secondary endpoints were statistically significant, including the proportion of patients achieving a clinically significant improvement in lung function, as well as the mean improvements in exercise capacity, hyperinflation and quality of life. In LIBERATE, the Zephyr Valve group saw 47.7% of patients achieve a FEV1 improvement of ≥ 15% from baseline compared to 16.8% in the control group (p<0.001). This absolute change in FEV1 showed significantly greater mean improvement vs the control group.” 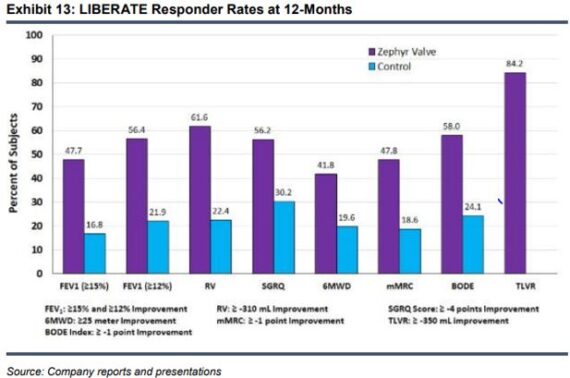 Since obtaining FDA approval in 2018, Pulmonx has been steadily expanding its U.S. direct sales force and marketing infrastructure. As of June, the company’s U.S. sales team totaled 42 members, up from 32 at the end of 2019. Currently, the sales team sells to more than 100 hospitals. Again, Pulmonx has identified 500 high-volume U.S. hospitals that actively perform interventional pulmonary procedures. “With roughly 20% of target accounts penetrated today, Pulmonx has a long-tailed account funnel to drive commercial momentum.”

In Canaccord Genuity’s initiation note, analyst William Plovanic is modeling LUNG’s revenue via an account productivity model, meaning revenue growth will be driven by both more account adds as well as deeper penetration into existing accounts. These inputs derive total estimated case volumes per quarter, which is then combined with estimated ASPs to approximate total US revenue. Their estimates also include a rapid increase in procedure volume – with 75% and 78% Y/Y procedure volume growth in 2021E and 2022E, respectively. “We believe it is important to note that 2,147 and 3,831 projected US procedures in 2021E and 2022E, respectively, represent market penetration of only 0.4% and 0.8% of the addressable market.”

Stifel analyst Rick Wise was out with a note saying they view the reimbursement decision as a meaningful, broadly-encouraging sign for future Zephyr adoption for two key reasons:

(1) Pulmonx has already made substantial progress towards securing reimbursement from most commercial US insurers. That said, BCBS remains a large US commercial insurer yet to issue a positive/neutral coverage policy. As the second largest BCBS member (~16M out of 89M BCBS covered commercial lives), HCSC’s positive coverage decision to us is encouraging for potential future positive BCBS member decisions ahead.

(2) While Pulmonx has done a great job with getting pre-authorizations approved, regardless of policy coverage (~95% success), today’s decision clearly should facilitate/speed-up the process for HCSC members. 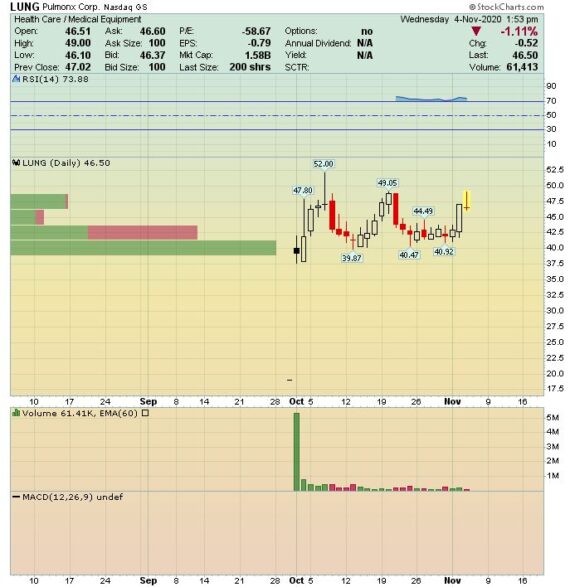