Sonendo, which is set to debut this Friday, October 29th under the ticker “SONX,” is a medical technology company focused on saving teeth from tooth decay. The company has developed the GentleWave System, which is a Class II device and has received approval (510k clearance) from the FDA.

According to their S-1 filing, Sonendo is focused on utilizing the GentleWave System to transform RCT, or Root Canal Therapy, which they believe is “antiquated” and leads to poor clinical outcomes. Its commercial efforts are primarily focused on driving awareness and adoption in their initial target markets of the United States and Canada, where they estimate that approximately 17M root canal procedures are performed annually, accounting for approximately $17B in healthcare-related expenditures. “Given the average selling price of our products and our estimates on replacement cycle, and the number of root canals performed annually, we estimate that our total annual addressable market in the United States and Canada is approximately $1.9B.” They also believe there is a significant opportunity for the GentleWave System in RCT outside the United States and Canada, with more than 50M root canal procedures performed annually on a global basis.

The GentleWave System will include PIs, or Procedure Instruments, which are pre-packaged, sterilized, single-use instruments connected to the console via a high-pressure hose that delivers optimized fluids from the console to the distal end of the PI. The distal end of the PI interacts with the tooth and is composed of four key components: an orifice, or nozzle, a flow-deflector, a sealing component and an evacuation tube. Currently, there is a PI for molar teeth, or a Molar PI, and one for anteriors and premolars, or an APM PI. The differences in design are driven by the anatomical differences in teeth.

They do point out that they are also exploring opportunities to leverage this platform beyond RCT to treat cavities in earlier-stage tooth decay, for which they estimate there are approximately 175M procedures performed in the United States each year.

Back in 2013, the company conducted a clinical study to assess the long-term performance of the GentleWave System, or the PURE Study, which evaluated healing rates for molars 12 months after root canal treatment. The study also included data evaluating healing rates at six months after treatment. Six-month results were published in the Journal of Clinical and Experimental Dentistry in 2016 and 12-month results were published in the Journal of Endodontics in 2016.

“The study cohort was composed of 89 patients in need of endodontic therapy who were consented and received treatment via a GentleWave System from one of six private endodontic clinics in Southern California. The six endodontists that participated as investigators were trained to use the GentleWave System and performed a standardized treatment procedure at each respective clinical site. Additionally, 92.1% of the enrolled patients were treated in a single visit. Pre-operative, intra-operative and post-operative data were collected from the patients and assessed by two trained, blinded and independent evaluators. Seventy-seven patients, or 86.5%, returned for the six-month follow-up and 75 patients, or 84.2%, returned for the 12-month follow-up.”

Additionally, a study was published in the Dentistry Journal in 2016 which compared the penetration depth of treatment fluids using the GentleWave System with devices commonly used in conventional methods. Specifically, the conventional methods in the study used passive ultrasonic activation with a PiezonMaster 700 (EMS) with an ESI-tip and active ultrasonic activation using a PiezonMaster 700 with an ESI-tip with maximum irrigation rate. The in-vitro study included 40 extracted human molars. “The GentleWave System achieved statistical significance in cleaning deeper into the dentinal tubules in the apical, middle and coronal regions, with treatment fluids cleaning dentinal tubules in the apical region between 4 and 8.5 times deeper than the other devices.” 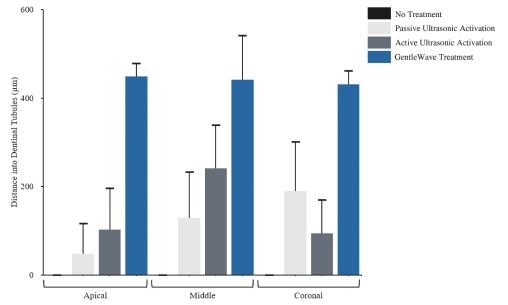 In the United States and Canada, the company has a direct sales force that markets and sells the GentleWave System to clinicians performing a high volume of root canals as part of their practice. They estimate that there are approximately 5,000 endodontists and 176,000 general dentists in the United States and Canada. The sales force leverages third-party data on root canal procedure volumes by practitioner, thereby enabling them to efficiently and effectively identify target accounts.

The company’s total revenue consists primarily of product revenue and software revenue. They generate product revenue on the capital sale of their GentleWave console as well as recurring sales of their single-use PIs and accessories. To a lesser extent, they also derive product revenue from service and repair and extended warranty contracts with existing customers. Meanwhile, software revenue relates to fees it receives for licensing their practice management tool, The Digital Office, to dental practitioners.