This morning in Conversations (See HERE), I provided a brief overview of The Duckhorn Portfolio, which filed its S-1 with the SEC on Tuesday. Its lead underwriters include JPMorgan, Credit Suisse, and Jefferies.

This company is a producer of luxury wines in North America. I had also mentioned that the only pure play wine company right now in the market that I’m aware of is $39M Willamette Valley Vineyards (WVVI). Back to Duckhorn, their portfolio is focused exclusively on the desirable luxury segment, the fastest-growing segment of the wine market in the United States, according to IRI, which they define as wines sold for $15 or higher per 750ml bottle.

Duckhorn sells their wines in all 50 states and over 50 countries at suggested retail prices ranging from $20 to $200 per bottle under a world-class luxury portfolio of brands, including Duckhorn Vineyards, Decoy, Kosta Browne, Goldeneye, Paraduxx, Calera, Migration, Canvasback, Greenwing and Postmark. As you will see in the image below, 73% of sales come from Duckhorn Vineyards and Decoy while the other brands make up the remaining 27%. 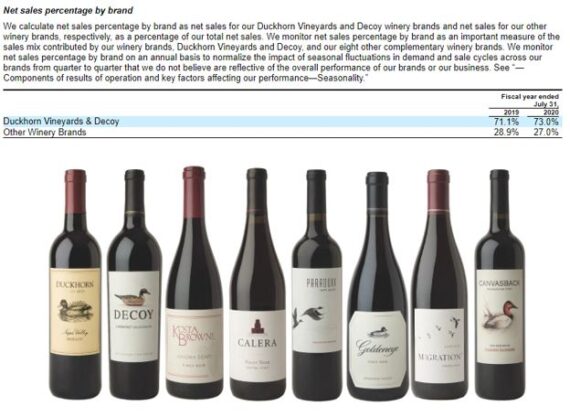 Wholesale Platform – Duckhorn distributes their wines in all 50 states and over 50 foreign countries. In some states, an exclusive distributor must be assigned for each brand, and that distributor retains long-term rights to sell the brand in that state. “We pride ourselves on our strong relationships with our distributors and structure these relationships within applicable law to maximize continuity and flexibility.”

In California, their right to sell directly to retail accounts enhances profitability and allows them to have greater control of brand messaging and focus within the state. While few scaled producers utilize this route to market, The Duckhorn Portfolio has made use of this approach in California since 1980. In Fiscal 2020, California represented approximately 24% of wholesale net sales, with more than 2,800 retail accounts. “Additionally, a small percentage of our wines are sold directly to accounts outside of California, including cruise ships, airlines and duty-free shops. Our margins for direct sales of wine are higher than our margins on wine we sell through distributors.”

DTC Platform – This part of our business encompasses their multi-winery e-commerce website, featuring award-winning subscription wine clubs, and is reinforced by their seven stylistically unique and high-touch tasting rooms located throughout Northern California and the state of Washington. The company’s wine club boasted over 55,000 members as of Fiscal 2020, and it hosted nearly 100,000 consumers at their tasting rooms in 2019. “Our ultra-luxury wines, which we consider to be wines with suggested retail prices of $25 or higher per 750ml bottle, are prominently featured in this channel, yielding high average bottle prices. Early access to new releases, a compelling slate of member benefits and active cross-marketing throughout the portfolio drive wine club member loyalty and sales. These strategies maximize each winery brand and property while driving awareness for the Company’s other world-class wines and properties, resulting in more and lasting connections with consumers and wholesale customers.” 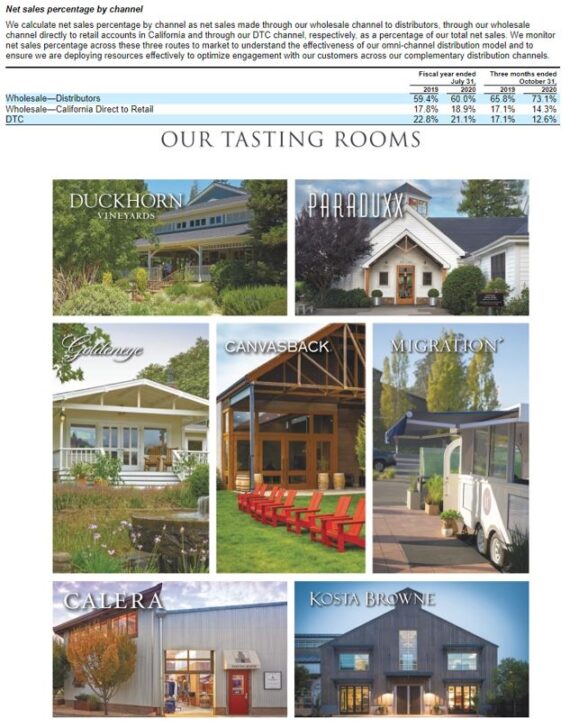 Net sales for the three months ended October 31, 2020 increased $18.9M, or 26%, to $91.6M compared to $72.7M for the three months ended October 31, 2019. This increase was primarily driven by higher sales to wholesale accounts net of increased discounts, which contributed to sales growth and steady sell-through of inventory by distributors and retail accounts.

Seasonality – According to the S-1, the company’s net sales are typically highest in the first half of their fiscal year due to increased consumer demand around major holidays. Net sales seasonality differs for wholesale and DTC channels, resulting in quarterly seasonality in their net sales that depends on the channel mix for that period. They typically experience a higher concentration of sales through their wholesale channel during the first and second fiscal quarters due to increased purchasing by distributors in anticipation of higher consumer demand during the holiday season, which has the effect of lowering average selling prices as a result of the use of distributor and retail sales discounts and promotions in their wholesale channel. In Fiscal 2020, net sales in the first, second, third and fourth fiscal quarters represented approximately 26.9%, 28.4%, 25.4% and 19.3%, respectively, of total net sales for the year.

Wildfires – During Fiscal 2020 and the first quarter of Fiscal 2021, several wildfires occurred in Northern California. These fires have adversely affected industry grape supplies, though the full extent is not yet known. Other than smoke taint to grapes that had not been harvested, the company’s own vineyards did not sustain damage during the fires. However, smoke and fire damage to vineyards in the primary regions and markets where they source fruit rendered some of the available grapes unacceptable for the company’s production needs, and the evaluation is ongoing. In response, it has taken steps to obtain alternative sources of supply that they believe will substantially mitigate the impact of the fires on their supply. “Wildfires and smoke damage to grape yields in 2020 and in future vintages could result in changes to our production plan, changes to the quantity or release timing of expected case sales in our sales forecast, and changes to future gross profit margins as compared to prior periods. We cannot yet estimate the full impact of wildfire-related disruption to the 2020 harvest, nor can we estimate the potential future impact on our sales for the fiscal years in which the 2020 vintage would be available for sale.”