JOANN Inc. (JOAN) is one of the largest arts and crafts retail chains in the U.S. and the industry leader in fabric & sewing, which comprises almost half of the company’s sales. The other half is comprised of Arts & Crafts as well as Home Décor. The company currently has 857 stores located across 49 states.

The company would debut back in March and report its first earnings results in early June. We would then feature the name in W/E Research in our Behind The Numbers segment. Some takeaways from that report included:

-Management highlighted that approximately 25% of their customers “make to sell,” including on platforms such as Etsy, Shopify and eBay, and those market exchanges continue to grow. Piper Sandler analyst Peter Keith, in his initiation note from April, commented that these customers look to crafting as a source of income and have steady shopping habits. “Online marketplaces are expected to show close to a 20% CAGR from 2020 to 2023, providing a solid multi-year tailwind for JOAN.”

-In the latest quarter, omnichannel contributed approximately 13% of JOAN’s net revenue compared to 4% in the same period last year. The company is currently investing in additional fulfillment capability that will support both omni growth and the overall supply chain network. “We expect this additional fulfillment capability to ramp up throughout the fiscal year and be fully complete by spring of 2022.”

-The company did not provide 2021 guidance given the uncertain environment. However, the company noted it is encouraged by the Q2 trends thus far.

-In her post-earnings note, Telsey Advisory Group analyst Cristina Fernandez said that Joann should continue to be a beneficiary of: 1) Over 8MM new customers acquired during the pandemic, 2) Its differentiated merchandise assortments (57% of its total SKUs are private label or exclusive), and 3) Its depth and breadth of sewing products (49% of sales), in which the company is the industry leader in the US with a 33% market share.

Since the company’s Q1 earnings report, recent checks have come out, which included a Home Work Survey from BofA. They note that they originally launched this Home Work series in June 2020 with a survey of >1,000 US consumers to analyze the short and longer-term consequences of the outbreak of COVID-19 and social distancing on how consumers live, work, and spend. They have since re-run this survey every three months to see how consumer behavior and intentions have been changing. This time around, they note:

–57% of survey respondents have either picked up a new hobby or have engaged more in hobbies they already enjoyed since the start of the pandemic.

-BofA would also host meetings with the company on June 8th and took away an optimistic tone of sustainable growth in sales and profit, aided by growth from a new customer base of enthusiastic crafters and sewists. Among their survey respondents that stated that they have engaged in sewing/arts & crafts as a hobby during COVID, 29% were 18-29 years old (compared to just 22% who were 30-44 years old). This supports commentary made by CEO Wade Miquelon that the category has seen a “barbell” effect of its customer base, with a core group of 50+ year old female customers representing the previous core demographic for JOAN, and a newer group of diverse 20-somethings emerging as a rapidly growing group of crafters. 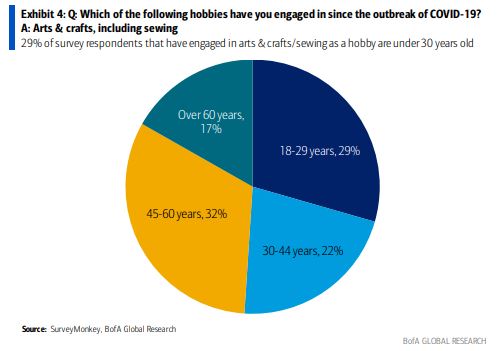 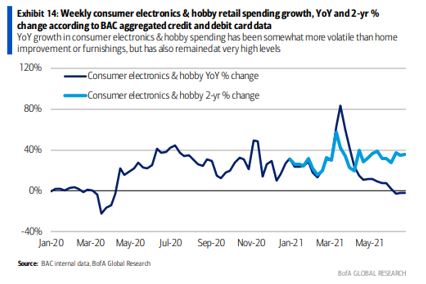 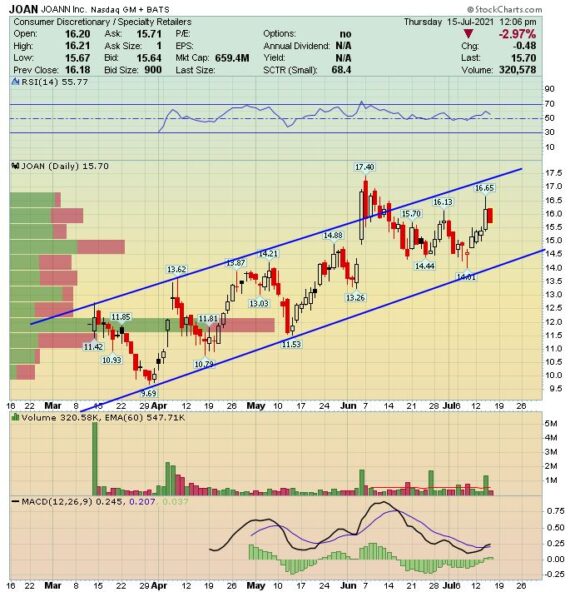