Management would indicate on their conference call that the higher sales primarily resulted from increased sales for their specialty bearings products and initial deliveries under their JPF Direct Commercial Sale (DCS) contract.

JPF – Also known as Joint Programmable Fuze, this program provides critical improvement to the Department of Defense’s ability to respond to threats throughout the world. The JPF, in conjunction with the Joint Direct Attack Munitions (JDAM), allows aircrews to change fuze settings in-flight (prior to weapon release) to respond to a wide variety of targets.

During the third quarter, the company received an export license for and made initial deliveries on their $324M JPF DCS contract. “This enabled us to increase JPF deliveries to 11,750 units compared to 3,800 units in the prior year, and the higher DCS mix led to significantly improved profitability in the period. Demand for the JPF remains high, and during the quarter, we received our second significant JPF DCS order this year, adding $42M to backlog in September.” 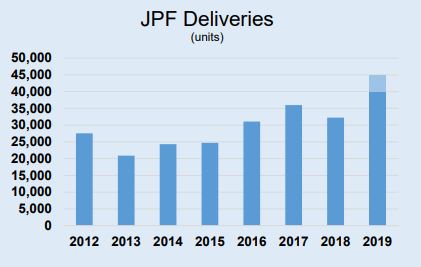 K-MAX – Described as an American helicopter with intermeshing rotors that is optimized for external cargo load operations and able to lift a payload of over 6,000 pounds. After being out of production for more than a decade, Kaman reintroduced the line in June 2015. As KeyBanc stated in their September 12th note, they see long-term benefits coming from defense spending and other applications like cargo transfer and fire suppression. Additionally, KAMN is working on flight control systems that will allow the aircraft to change from manned to unmanned flight. Currently, there are 32 K-MAX in operation and management sees 42 in operation by 2021. “We think the real benefit from K-MAX, however, is the aftermarket parts and service stream that typically occurs two to three years after purchase.”

Turning to the K-MAX in the prior quarter, management was pleased to receive two new orders, bringing their total backlog to three aircraft. In addition to the new aircraft orders, they continued to make progress on unmanned systems of the K-MAX. “And during the quarter, we received our first five orders from commercial operators, demonstrating the opportunities they see for unmanned K-MAX operations. We are encouraged that we continue to add to the K-MAX fleet and remain very optimistic for the long-term military applications.” 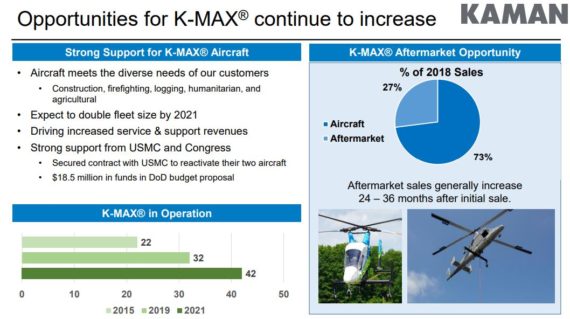 M&A – Finally, the company would announce on the Q3 call that it acquired Bal Seal Engineering, an industry-leading provider of highly engineered seals, springs and contacts, for $330M.

“The addition of Bal Seal enhances our position as a leading provider of highly proprietary engineered products, broadens our access to high-growth end markets such as medical technologies and industrial applications and delivers both margin expansion and cash accretion in year one.”

Beyond that, CEO Neal Keating said that they will continue to seek M&A opportunities. “With approximately $700M in cash and debt available to deploy, we have the financial capacity to acquire and integrate companies that will strengthen our current competitive position and provide improved long-term growth opportunities.” 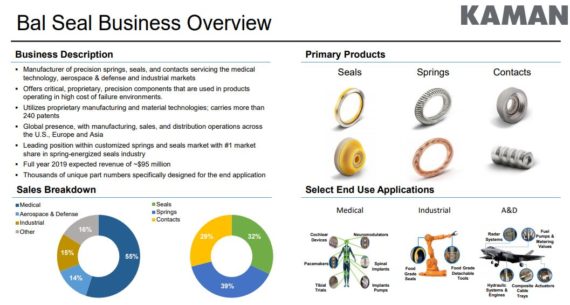 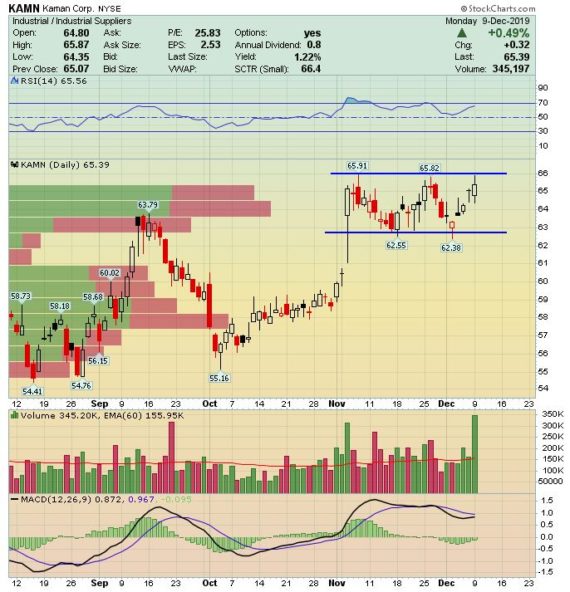