Kennametal is an industrial supplier specializing in a wide variety of metal cutting and drilling solutions. This includes turning, milling, hole-making, tooling, custom cutting, and maintenance services. The company also has two other secondary businesses: producing custom alloy components and frac seats for oil and gas companies, and providing ceramic solutions for packaging companies (for metallization of films and papers). In terms of top-line exposure to end markets, Kennametal derives the vast majority of its total revenue from the general manufacturing (~55% based on company filings) and transportation industries (~28%). Geographically, the US (45%) and EMEA (31%) account for over 75% of revenue, with Germany being their largest foreign market (14%).

Being a tooling and parts supplier, it shouldn’t come as a huge surprise that Kennametal’s business is closely tied to the US and European manufacturing cycle. UBS on July 8th would downgrade the company from Neutral to Sell, highlighting this correlation:

“We are downgrading KMT to Sell from Neutral to reflect our increased level of conviction that results will fall short of consensus estimates. Short cycle indicators suggest growth will first flatten then likely decline over the next several quarters; we forecast a 3% organic revenue decline in FY23E vs consensus mid-single digit growth… In periods with macro pressure, multiples have trended towards upper single to low double-digit levels (varied depending on the cycle), and there is generally limited support for the stock when earnings miss… We believe KMT’s organic revenue growth rate will stall. KMT’s organic revenues have historically been closely correlated to changes in ISM (Figure 1) … We note KMT has tended to outperform the XLI in quarters when ISM’s PMI is up YoY, and underperform when PMI is down YoY. Over the past 48 quarters, the relationship held up ~60% of the time (Figure 3).” 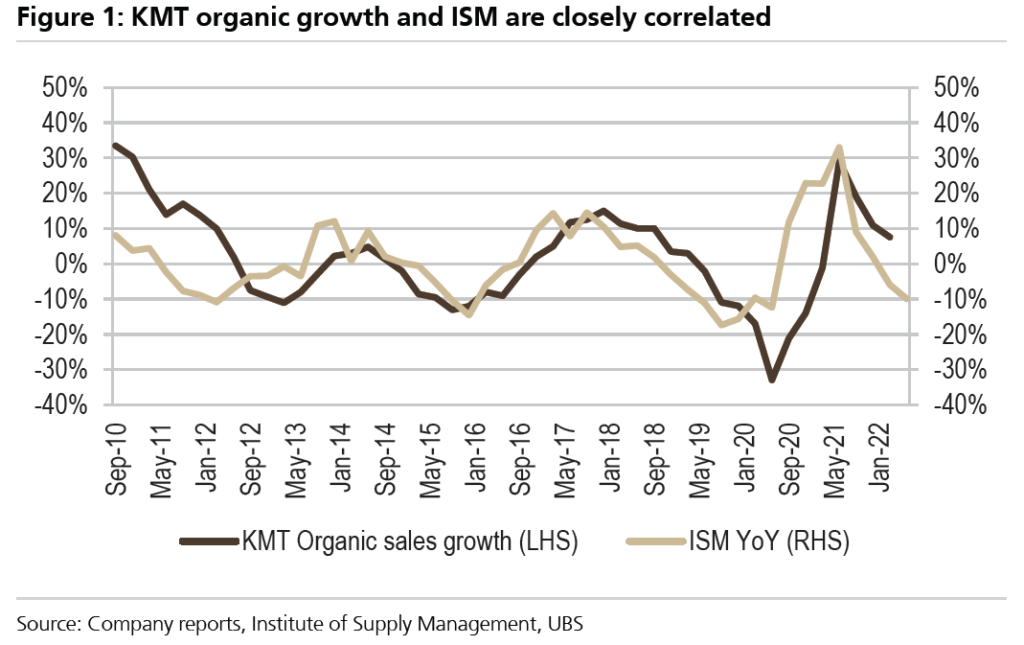 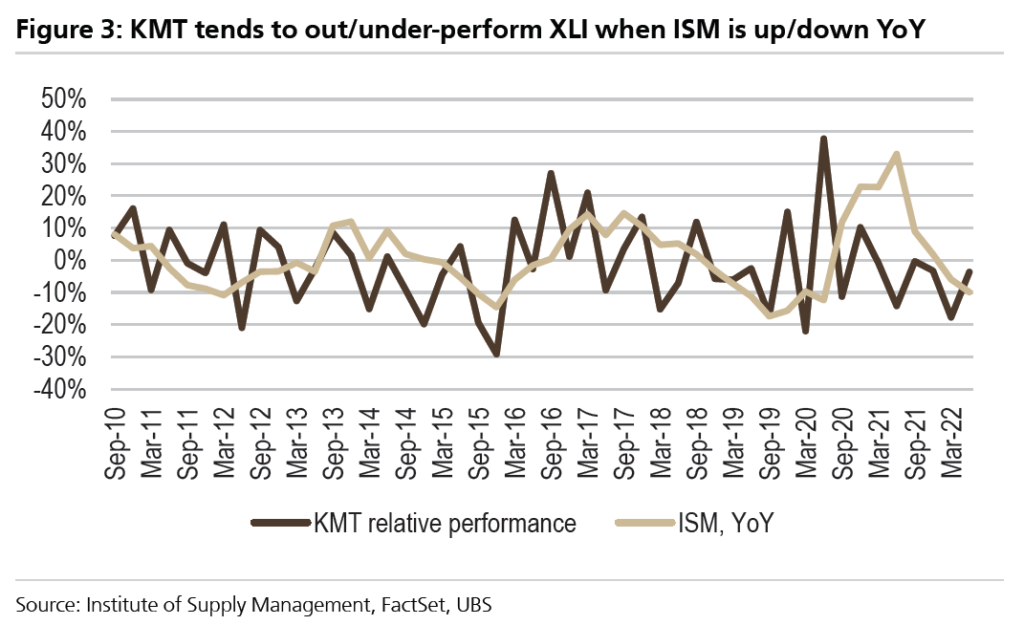 A closer look at the latest Manufacturing ISM (June 2022) report would indicate that industrial new orders (the most forward-looking sub-index in the survey) in the US are now in contraction territory, having shed 5.9 pts sequentially to 49.2 while employment has now contracted for two straight months, down 2.3 pts to 47.3. Digging deeper, out of the 18 manufacturing industries surveyed, seven reported a decline in new orders, including Transportation Equipment, Electrical Equipment, Appliances & Components (all highly relevant to Kennametal’s business). Further, under the survey responses section:

Elsewhere, Kennametal’s second-largest market Europe does not appear to be faring much better, with the Eurozone Manufacturing PMI having fallen to a 22-month low of 52.1 and both domestic and export new orders now recording outright declines. Backlogs also contracted for the first time in almost two years. Per compiler S&P Global:

“A general slowdown in demand for goods was mentioned by survey respondents. Many commented on the reluctance of clients to place new orders… There was also growing evidence of businesses looking to control costs as purchasing activity rose at the slowest rate across the current 22-month sequence of growth (note: lower manufacturing CapEx + OpEx has negative implications for Kennametal) … The downturn looks set to gain momentum in coming months. Inventories of both raw materials and unsold stock are rising due to lower-than-expected production and sales volumes respectively, hinting that an inventory correction will act as an additional drag on the sector in coming months.”

Meanwhile, looking at the transportation-related sectors which make up just under 30% of Kennametal’s total revenue, UBS’ autos team in a separate recent note would cut their 2022 and 2023 global auto production forecast by 3.5% and 3.2%, respectively, on both macro (demand) and production (supply) pressures:

Trucking is another important transportation market. Stifel would note a strong correlation between trucking and retail stock performance, as well as truck production headwinds from semiconductor shortages, in their June Trucking, Logistics & Truck Leasing update:

“Spot rates started to decline in January and TL stock performance suffered, but retailers generally performed well… Over the last several years, the returns for both have been pretty highly correlated (R2 above 60%) but there was a dislocation that started to show up in recent months. Since Walmart’s earnings report, the historical trend has returned.

The primary headwind for Class 8 production has been a shortage of semiconductors, not dissimilar to what is being seen across the broader auto and higher-tech spectrum. In Exhibit 8 below, we highlight a primary source of Class 8 delays by looking at bare wafer shipments. Bare wafer shipments (a key component in the semiconductor manufacturing process) have grown at a slower rate than durable goods spending. We use durables as the best proxy for spending that would require semiconductors (e.g., electronics, autos, appliances).”

Lastly, turning our attentions to rail transportation, Stifel would observe in their latest monthly checks on June 20 that carload traffic continues to trend below pre-pandemic levels (with headwinds especially persistent within grain and intermodal categories), while weekly NA Class 1 volumes have consistently come in slightly negative all year. 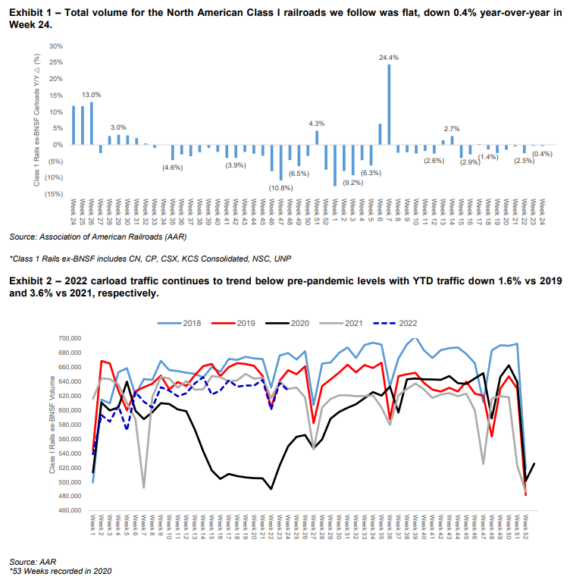 Since the COVID pandemic began, Kennametal has invested ~$300M towards manufacturing modernization and capacity expansions in their Ohio factories, which make toolholders and inserts for their Metal Cutting segment. BofA (Neutral rating on KMT) and JPMorgan (Underweight) visited the upgraded plants recently, and while both were impressed by the resulting reduced labor requirements and improved capacity, they would note that medium-term demand picture is not encouraging.

“In our view, it was evident throughout the tour that the facilities are modernized, highly automated, and exemplify the progress in KMT’s initiatives (i.e., rationalizing SKUs, advancing smart factories from hardware to processes). We note reductions in labor and inputs for specific processes (+75% productivity in insert presses, +120% throughput in insert packing/shipping, 70% reduction in Orwell facility water usage). That said, attempting to quantify exactly how some of these processes savings at the two facilities flow to the bottom line of the Metal Cutting segment remains a bit of a challenge. While we remain impressed with the strides Kennametal has made, the true test of the impact to operating margins from the modernization and simplification efforts will come with the return of high production volumes. The issue is that a tenuous macro-economic backdrop and rising rates leaves us cautious on when that return may take place.”

“Overall, we were impressed by the ‘before vs. after’ improvements. However, management acknowledged both factories are operating considerably below capacity, but it remains confident that the margin accretion potential of these modernized plants will be realized with volume recovery when supply chain and the macro backdrop improves. With reduced labor input, the mix of raw material costs in COGS has increased vs. KMT pre-modernization. This is an unfavorable setup for margins, given the spike in tungsten prices (KMT’s biggest raw material), in our view.”

Looking at the long-term monthly chart of KMT below, we can observe the stock has  tended to bottom out in the mid-to-high teens in past business cycles, with P/E multiples dropping below 10x each time. A decline to high teens (around $18 to $19) over the coming weeks/months would not be inconceivable, as it would represent ~11x $1.65 2023 EPS. A 2023 EPS of $1.65 would imply a moderate ~3.5% sequential decline vs the current 2022 consensus estimate of $1.71, a probable scenario given the ongoing manufacturing slowdown and recession risks in the US and Europe. In contrast, the Street is currently looking for 17.2% EPS growth. 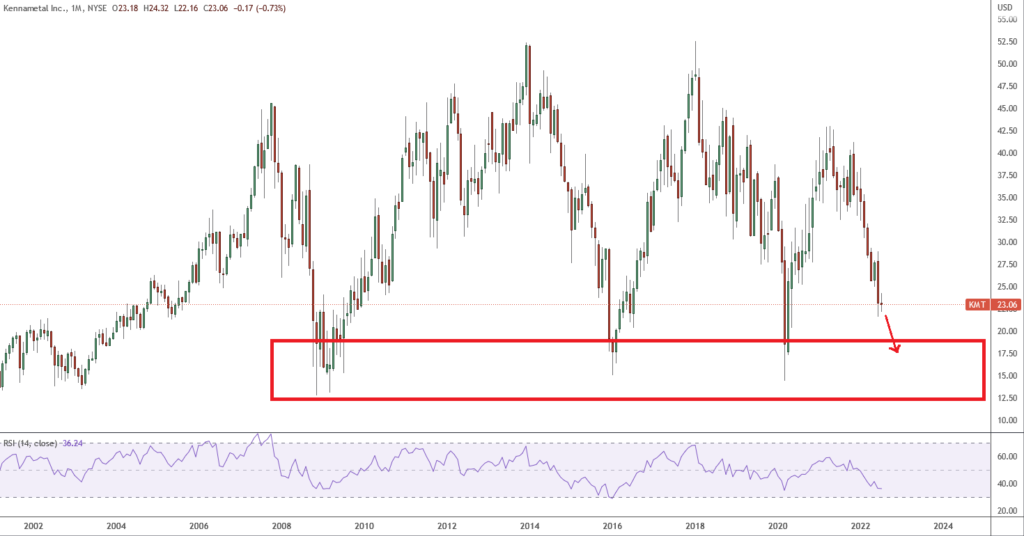