LifeStance Health Group (LFST), which debuted last month, is the largest outpatient mental health platform in the United States. The company operates a hybrid model of delivery by offering patients the option to receive care in-person or through a virtual setting. In JPMorgan’s initiation note, they point out that the mix of in-person and virtual care visits stands at roughly 50/50.

The company estimates the current total addressable market for the outpatient mental health space of $116B. With LifeStance reporting $377M in 2020 revenue, this points to a significant runway for growth and share gains. According to the National Institute of Mental Health, there are an aggregate 51.5M individuals in the U.S. living with some form of mental illness. According to the same study, only 23M received mental health service.

As mentioned, the company’s model consists of in-person treatment and virtual care. As it relates to in-person treatment, LifeStance’s clinicians are comprised of psychiatrics, APNs, psychologists, and therapists through both wholly-owned as well as affiliated practices. Since inception, in addition to bringing on clinicians via acquisition, the company has hired 1,746 clinicians and highlights their retention rate of ~87% (compared to an industry average of 77%). These clinicians provide a mix of psychotherapy and psychiatric care for all ages across patient demographics. The conditions treated include: Anxiety Disorders (social anxiety disorder, panic attacks and obsessive compulsive disorder), Mood Disorders (depression and bipolar disorder), Personality Disorders, and Psychotic Disorders (schizophrenia).

Regarding its digital offer, JPMorgan analyst Lisa Gill notes the company’s comprehensive suite of digital tools are integrated into the patient and clinician experience. When a patient opts for virtual care, the process is easy to use, as they can schedule their visit through the use of their computer, smartphone or tablet. Prior to their appointment, the patient is sent an automated, LifeStance-generated reminder through text or email (depending on the patient preference) with a link to commence the assessment. The process remains user-friendly through additional services such as adherence reminders, online prescription refills and payments, and online messaging. These offerings prove to be value-added for this patient population, as studies have shown that patients with chronic mental illnesses who missed over two appointments annually were over eight times more at-risk for all-cause mortality compared to those who consistently attended their appointments, according to studies from BMC Medicine. The company notes that ~80% of patients have used its digital tools. 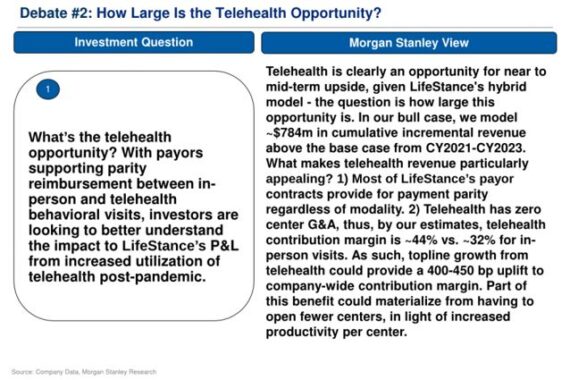 Another aspect to LifeStance are the payor relationships, in which they have a diversified mix of over 200 national, regional and local payors, under which patients can utilize their in-network benefits when receiving care from a LifeStance clinician. This includes multiple national contracts with larger insurers, such as Aetna, Anthem, Cigna, Centene, Humana, Kaiser Permanente, United Healthcare, and others. “Payors contract with LifeStance based on the company’s broad footprint (based on the company’s national clinician base), comprehensive service offering (treating conditions across the clinical spectrum), ability to deliver measurable and improved outcomes, hybrid model (which offers patients a high degree of flexibility) and ability to integrate mental health with primary care physicians to provide more holistic care.”

JPMorgan points to a 100% payor renewal rate and a track record of expanding relationships. LifeStance has seen significant growth in payor relationships where the company is in network, increasing from 80 payors as of the end of 2018 to 206 as of December 31st, 2020, up by over 2.5x. 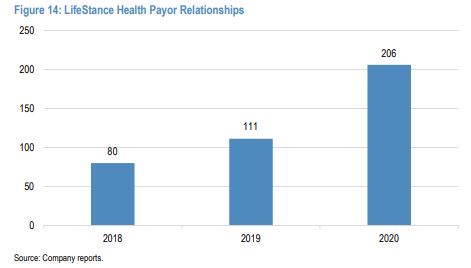 New States – The company uses certain metrics for assessing the entrance into potential new markets. As of right now, the company’s current presence encompasses high-density MSAs on both of the East and West Coast as well as a mix of rural states. The company is planning to expand into 10 new states encompassing 28 additional MSAs in the near term, which it believes could expand the overall population coverage by 29M individuals. 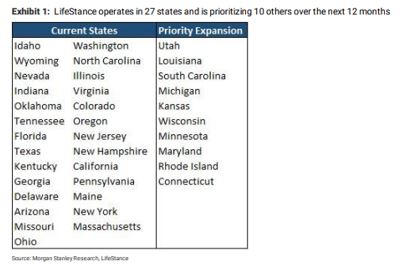 Acquisitions – After the company identifies an attractive market that it will attempt to enter, JPMorgan says LifeStance will typically look to acquire a high-quality practice with a strong clinical track record and in-network payor relationships within that market to establish an initial presence. To date, the company has closed 53 acquisitions. “The fragmented nature of the behavioral health market allows for ample opportunity to acquire centers, and the company has pointed to a significant amount of potential targets, and points to proprietary database that includes 3,000 potential opportunities encompassing more than 6,000 centers and over 100.000 clinicians.” Analyst Lisa Gill believes the company’s solid balance sheet provides significant financial flexibility to further execute on this strategy. The company typically sees strong returns on acquisitions, as the company is able to move clinicians to their more attractive payor contracts, shift clinician compensation to a productivity-based model, and centralize core functions to drive further margin improvement. 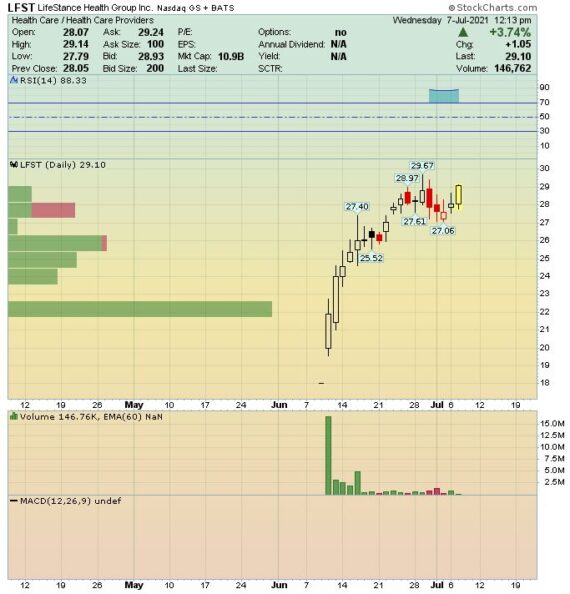