Keefe Bruyette & Woods analyst Michael Perito, in his December 13th note, highlighted that Live Oak originated over $1.8B of SBA PPP loans, generating loan fees of $18M with approximately $43M still yet to be recognized. They expect nearly 90% of the fees will be recognized through forgiveness in 1H21, adding a benefit to the Net Interest Margin (NIM) of 68 bps and 66 bps in Q1 and Q2, respectively. Live Oak boasts the top SBA 7(a) origination platform in the country, and should any additional stimulus programs or relief occur within the SBA domain, they would expect LOB to disproportionately benefit relative to its other bank peers.

The main point of this write-up is to highlight the massive exposure this company has in the technology sector relative to its banking peers. It all started many years ago when a typical SBA loan would require an abundant amount of documentation. Live Oak quickly began searching for a more efficient way to streamline this paper-intensive process. This would be important as an incorrect or missing document meant that the SBA would not honor its guarantee on a problem loan for such reasons.

This led to the company creating its own proprietary software, which was named nCino. Yes, this is the same nCino (NCNO) that went public earlier this year. Live Oak spun nCino out back in 2014 ahead of its own IPO in 2015. Once NCNO came public, it provided investors validation and “proof-of-concept” that this program they helped create was legitimate. If you take a look at the chart, it just so happens that LOB’s run started in July, the same month nCino came public.

Beyond nCino, the company’s subsidiary, Live Oak Ventures, was formed in August 2016 with the purpose of investing in businesses that align with the company’s strategic initiative to be a leader in financial technology. Today, the bank has a handful of active technology investments, which includes platforms either individually or jointly developed by Live Oak, or external technology start-ups in various stages which Live Oak has invested in. Some of the more important ventures include:

Finxact – This is a cloud-native service provider for banks, with its website claiming its platform uniquely provides banks the ability to quickly innovate new products, services, and economics, without any technology upheaval. There are many SaaS challengers in the bank technology core segment. According to KBW, what stands out with Finxact is the interest from larger banks and financial data companies, such as Truist and First Data. nCino had similar interest from larger banks at a fairly early stage, and they think technology platforms that have success penetrating larger banks have a great chance for success, in our view, as smaller banks typically follower the biggest banks directions as it relates to technology adoption.

Greenlight – This is a rapidly growing neobank, with a unique strategy focused on parents enabling children to learn about finances through a monitored, smart debit card. As far as KBW can tell, they are the only neobank targeting this population cohort exclusively and they have over 2M users based on the latest publicly disclosed data from September 2020. Greenlight’s implied post valuation according to PitchBook Data was $1.2B after the completion of its most recent venture funding round, and the neobank is generating revenues through debit interchange fees, and a monthly subscription fee of $4.99 which includes up to five debit cards for a family and financial lessons for kids. “While we can’t comment on the companies forward outlook, LOB’s involvement has already proved to fruitful thus far, booking a $13.7 million gain in the third quarter and with Greenlight’s valuation directionally moving higher quickly, LOB seems well positioned to hopefully recognized future gains on this asset as customers continue to grow.”

Apiture – Back in May 2017, Live Oak announced a joint venture with First Data in an effort to accelerate the growth of next-gen digital banking services. This was aptly named Apiture whose mission is to help banks expand the features and functionality of their digital banking platform while avoiding having to change their core technology provider, which can be costly and time-consuming. Apiture can integrate with over 40 different platforms in the United States today. KBW would say:

“We find this concept to be very interesting, as we believe community and regional banks, in addition to credit unions, are all searching for ways to remain digitally competitive in a cost-effective manner while limiting operational risk. This is where a company like Apiture can come in, who as the name suggests is using an API layer to help bank customers link their legacy core back-end technology systems to new applications that are in demand by consumers. As we have written previously, we think incumbent banks (particularly smaller ones sub $50 billion-in-assets), will elect to work more heavily with companies such as Apiture in the future, with the total addressable market for this business seemingly very large with over 10,000 federally insured banks and credit unions in the United States, most of which are pretty small and have limited technologic capabilities and budgets.”

As depicted in the chart below, Live Oak believes there is an unrealized implied gain of nearly $65M on its venture investments today, which equates to about $2.00 per share of additional tangible book value and 100 bps of tangible capital levels. 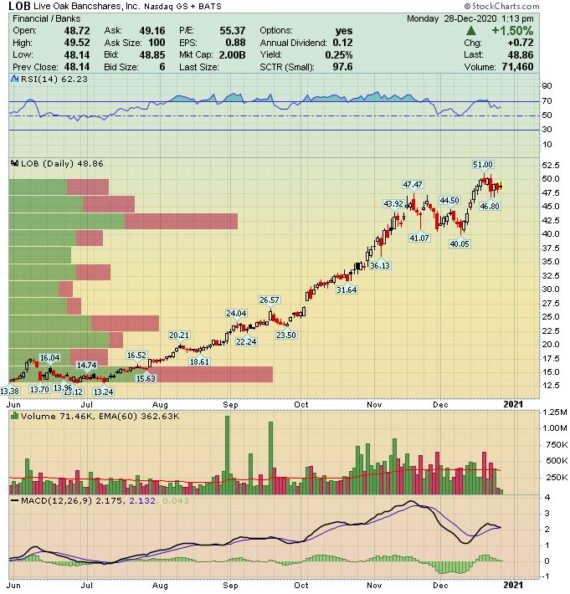