Among all macro data points in Q4, the one that stood out clearly was sharp deterioration in NAFTA Class 8 Truck Sales. Morgan Stanley is predicting another 25% decline in sales to 236,000 units, which hasn’t happened previously outside of US recession. 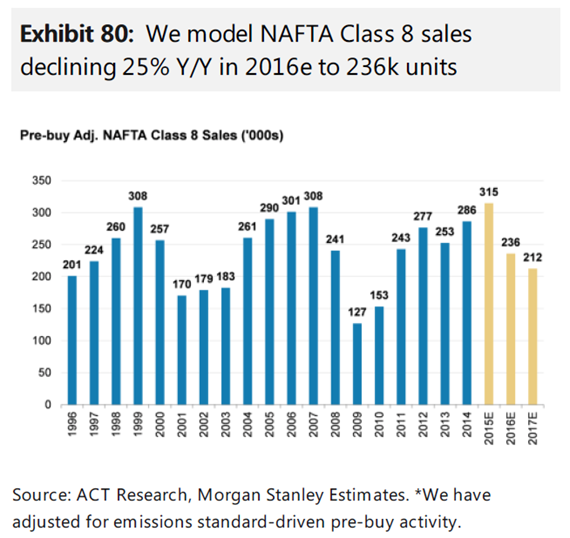 “With respect to freight demand, US GDP has decelerated, with key trucking end markets (consumer, construction) showing signs of weakness. So while fleets benefited from higher rates (partially driven by HOS & driver shortage capacity constraints) and strong demand in 2014, the industry faced weakening spot rates, higher driver costs, and lower demand during 2015. Fleets have responded by significantly reducing investment plans, and this has materialized in weak 4Q order trends; orders have trended ~10% below seasonality in October / November, on average. Looking forward, as the average age of a Class 8 truck is now below the 20-year average of 6 years (5.9 years in 2015 vs. 6.2 in 2014), we expect replacement demand to step down considerably, and we believe this is causing the ongoing downshift in fleet spend on trucks.”