The company’s main drug is Ingrezza, which last earnings posted a nice beat with sales coming in at $350M vs $323M consensus. Management attributed the increase in sales to high compliance among existing patients and a record number of new patient starts. In addition, 2022 Ingrezza guidance was increased going from $1.25B – $1.35B ($1.3B midpoint) to $1.35B – $1.4B ($1.375B midpoint). Shares were definitely rewarded, finishing higher by over 8%. In a post earnings note, Needham analyst Ami Fadia pointed out that back in April, Neurocrine added dedicated Ingrezza sales teams for neurology and long-term care facilities. “The addition of the new sales force hasn’t contributed meaningfully to Ingrezza’s sales yet, and its impact is expected to be seen starting late 2022.”

The sales team commentary certainly coincides with the JPMorgan survey they did a few months ago of U.S. psychiatrists and neurologists to assess the near- and long-term potential of Ingrezza for the treatment of Tardive Dyskinesia. The major takeaways included:

-Surveyed physicians indicated in person visits for the management of TD will continue to increase gradually over the next 6-12 months.

The other piece of news we learned from the conference call is that the company’s Phase 2a study of NBI-827104 in essential tremor (ET) did not meet specified endpoints and based on the totality of the data, it will not move forward. More importantly, there appeared to be no or very low Street expectations for the ET update. Needham does point out that a Phase 2 trial of NBI-827104 in rare epilepsy is still ongoing and management noted one should not extrapolate these results given the very different patient populations of these two indications.

Launched in September 2020, Ongentys is the add-on treatment for patients with Parkinson’s Disease. While not a major revenue driver at this point, it should be noted the solid script trends for the drug, as highlighted in the image below by IQVIA. Scripts surged for the first full year after launch, moderated, but have been showing higher highs. 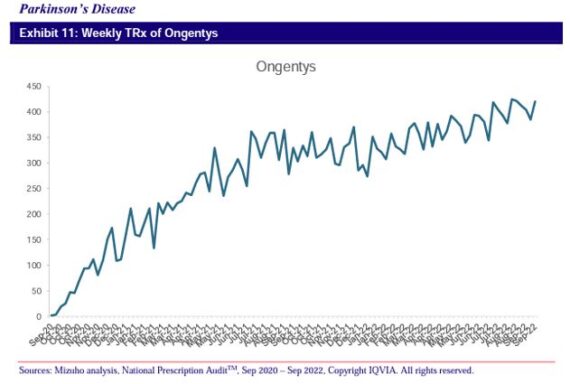 Finally, based on the catalyst calendar shown below, the company does still have some readouts by year-end, but they are shown to be of “low” impact. It would appear that all eyes will be on 2023 with their crinecerfont Phase 3 readouts, which is for the potential treatment of congenital adrenal hyperplasia. Wells Fargo, meanwhile, in their initiation note, points to upside opportunity coming come from the company’s MDD assets ‘845 and ‘846 and ‘352 in focal onset seizure, which are all reading out in 2023 as well. 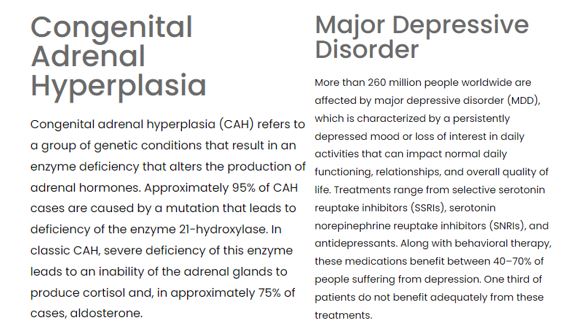 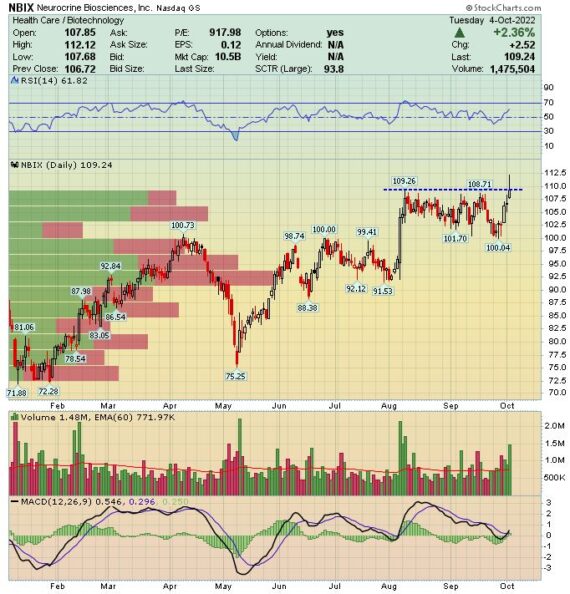