This global defense company, which is hosting their Virtual Annual Shareholder Meeting tomorrow morning at 8:00AM ET, recently reported Q1 earnings and has a couple of catalysts to watch out for. First, a quick breakdown of its Q1 segments:

Aeronautics Systems Sales increased 1% Y/Y to $2.8B driven by higher volumes in Autonomous systems and Manned aircraft, particularly in restricted programs and Global Hawk which were partially offset by ramp-downs in B-2 DMS and NATO AGS. JPMorgan commented that Northrop noted absenteeism and some supply chain challenges but is working with key suppliers and passing progress payment benefits to them.

With regards to awards, Northrop reported total net bookings of $7.9B, equal to a 0.9x book-to-bill. This resulted in a Q1 total backlog of $64.2B, down ~1% sequentially, but still up 12% Y/Y. Stifel noting that management acknowledged that the quarterly book to bill was in-line with their expectations, but still light compared to recent quarters. However, they noted that restricted programs reported a good 1.3x book-to-bill metric in the quarter, due largely to a restricted space award in the quarter. Management went on to add that they still expect a 1.0x book-to-bill for the year excluding the Ground-Based Strategic Deterrent (GBSD) award, which would take the company’s annual book-to-bill over 1.0x.

Ground Based Strategic Deterrent, or GBSD, is a US land-based intercontinental ballistic missile system in the early stages of development, slated to replace all 450 Minuteman III missiles in service with the US Air Force. According to AirForceMag on May 15th, it passed a two-day preliminary design review in late April.

Media reports have now suggested that the US Air Force may accelerate the award announcement for the next phase, for which Northrop is the sole bidder. The company anticipates there may be a modest acceleration (1-2 months) as the award was originally scheduled for August 2020. According to BofA, NOC is currently in the Technology Maturation and Risk Reduction (TMRR) phase of the contact. The next phase is the Engineering, Manufacturing, and Development (EMD) phase of the program.

In Cowen’s upgrade note last week, analyst Cai von Rumohr said that the total GBSD has an estimated price tag of $80 – $100B, but NOC’s potential revenue ramp has been unclear. This is because (1) The FY21 budget currently before Congress of $1.5B vs. FY20’s $0.5B+ is the program’s first major funding year and (2) The contract structure was not determined. Congress seems likely to approve the FY21 request, particularly given increasingly stressed U.S.-China relations. Moreover, all the members of NOC’s “team” now appear to have subcontractor roles in which their revenues will flow through NOC as prime contractor. This matters because, in some cases, suppliers’ work can be done under separate contracts and provided to the prime as GFE (Government Furnished Equipment) which doesn’t flow through the prime’s books. In addition, a relatively large portion of program funding of ~15-20% goes to the program office and government labs; and funding flows to the contractor with a lag of 12-18 months. “Taking all this into account, NOC’s GBSD billings should ramp over the next several years.”

Last Friday, JPMorgan was out with a note following a conference call with CEO Kathy Warden and CFO Dave Keffer. One topic of conversation was regarding its Space segment and how Northrop is very confident in its outlook (even excluding GBSD), noting that the opportunity set is the best management has seen. The company is most focused on the military and restricted arenas, having won a few key awards in Q1 and with additional opportunities later this year. There are non-military opportunities as well including support of NASA’s Artemis program, where they are on the Lunar Gateway and on Blue Origin’s Human Landing System team, as well as on-orbit servicing. Northrop is also vying for a spot on the Air Force’s National Security Space Launch program, competing against incumbents ULA and SpaceX along with Blue Origin, with two winners expected. Following its re-segmentation, it appears that the Oribtal ATK acquisition has brought the Space margin to the mid 10% range and with GBSD and other new programs we assume this contracts to ~10% with solid top line growth. After winning the B-21 program several years ago, Northrop continually highlighted its intention to grow profit dollars in the former Aerospace segment and JPMorgan assumes this is the priority in Space now as well. “To that effect, the Board changed management incentives this year to emphasize segment op profit and OCF dollars.” 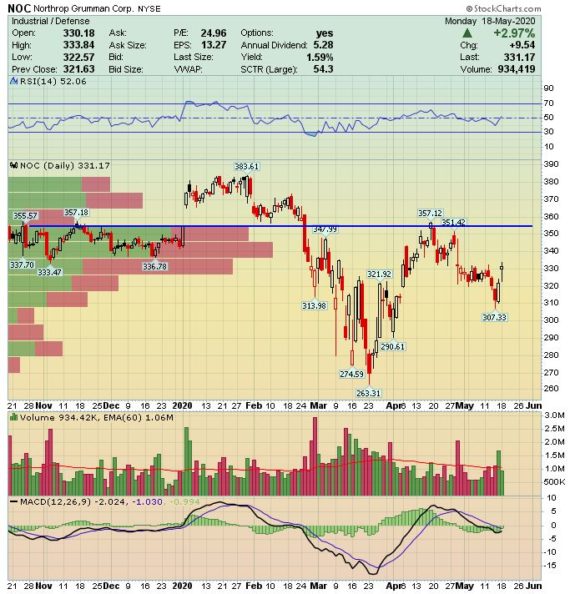