With a simple and straight forward executive order from President Bush after 9/11 terrorist attacks, the stock market was ordered to shut down from Sep 11-17, the longest period since 1933 great depression. It was the right move as it provided leadership the time necessary to calculate a response by working together as country came under attack.

Back then too airlines and travel industry suffered the most. People stocked up on food, medicine and water. There was chaos, anxiety, confusion and some signs of social disorder. The country was in despair. Absence of hope and surge of anger all at the same time that America was under attack. Businesses didn’t know how to respond. Which building will be attacked next. All tall buildings in the US were seen a risk. Many started to stay home and work. Event cancellations happened everywhere. Disney closed theme parks in FL and CA.

The anxiety multiplied when Anthrax started to appear in mailboxes. You touch it, you die. Few Congressmen received such letters in the mail with Anthrax traces. People couldn’t identify the enemy. Who is it? Where do these terrorists live? In the mountains in Afghanistan? Other places? The Federal Reserve responded with emergency interest rate cuts. The Federal government responded with bailout of most distressed industries and local governments. Tax cuts were announced which were later made permanent.

9/11 had an invisible enemy. Terrorists that didn’t belong to any one country. So the term “Axis of Evil” list was generated. The media was engaged in discussions about how many terrorists reside in the US. There must be terrorist cells here. How do we stop them? Where will they attack next? All high priority buildings were seen as target. New scanning machines were installed at rapid pace in airports. Sign-in checkpoints in lobbies with security personnel were enhanced in buildings from LA to Chicago to NYC. The military and national guards were told to stay ready to act at any time. A declaration of emergency was announced by President Bush.

There are many parallels between 9/11 and current Coronavirus situation. The common enemy is invisible. There is confusion, anxiety and general panic with ever increasing sign of hysteria spreading everywhere in public.

The only difference between then and now is lack of leadership response to instill confidence. Stock market should have been closed by executive order a week ago while authorities prepare a comprehensive plan to tackle a crisis of confidence created by common enemy: Coronavirus. After 9/11 the countrymen and statesmen united with common goal. Here we are involved in daily bickering on day to day basis compounded by social media. After 9/11, over 30 developed nations within a week came together to create a common response. Here we are cutting off airspace with Europe without even telling European authorities about it. After 9/11, national guards were mobilized swiftly at all airports to enhance security in check points and better scanning devices were installed everywhere. Here, we cannot even get testing kits out fast enough in time.

As market keeps falling, there is no end in sight. The leadership has no plan to tackle this crisis of confidence. 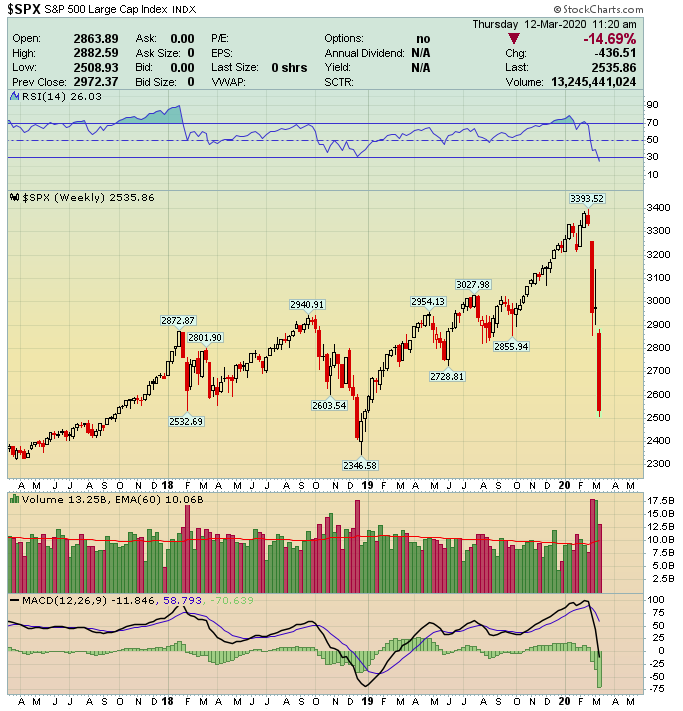