While there can be many reasons for insiders to sell company shares, from income generation to divorce, large personal purchases, leaving the company or outright nefarious insider activity, there is limited motive for purchasing company shares: fraudulent pumping, knowledge of unreleased data (acquisition or clinical results for example) or just simply liking the firm.

Generally there is some catalyst on the horizon that might entice purchases of this magnitude.  In PAG’s case, there aren’t any announced. There is ‘CL King’s Best Ideas Conference’ on September 13th, however there are around 60 other presentations as well.

There is simply nothing overtly evident.

New and Used Cars – With 355 dealerships and growing, PAG is the second-largest automotive retailer headquartered in the United States, slightly behind AutoNation (AN) in total revenue and number of outlets (2015 annual data). PAG owns the world’s largest dealership, Longo Toyota that sells on average 56 cars a day, over 20,000 a year. Just East of Los Angeles, the Longo location features a Starbucks Cafe, Subway restaurant, Verizon Wireless store, the Automobile Club of Southern California (AAA) and two Enterprise car rental offices on nearly 50 acres.

PAG’s dealership revenue mix is derived from over 40 makes largely skewed towards the premium, higher gross-margin market. Management logic is that their largely premium and non-U.S. brand mix presents the best opportunity for same-store growth combined with higher margin service and parts sales. With Ferrari’s (RACE) latest earnings numbers and share price gains, it isn’t hard to see their point-of-view. 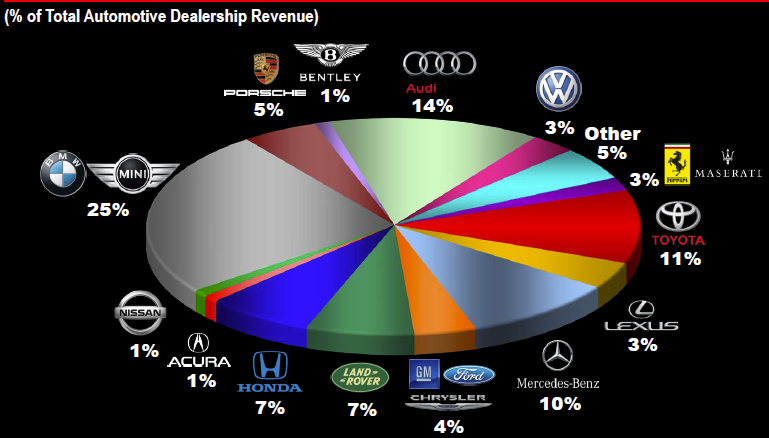 Trucks and Truck Rentals – Comprising only 5% of annual revenues, Penske is easily associated with their bright-yellow rental trucks. Along with U-Haul (UHAL), it offers moving trucks for the DIY-relocation population group, although in Canada it does not offer one-way rentals, unlike UHAL. This segment also includes sales and leasing of Class 8 trucks. Aditionaly, maintanance and logistics  services are provided.

On July 28th, PAG increased their stake in  Penske Truck Leasing Co by 14.4% bringing their ownership interest up to 23.4%. PTL’s majoority holder is GE Capital Global Holdings. PAG estimates the transaction will provide at least 25c per share in earnings on a yearly basis as well as “significant cash tax savings heavily weighted to the first few years of the investment.”

Options are available but don’t see much activity. The largest OI is in November 45 call strike with 1,409.

Recent increase in share price has it up against $42.05 overhead Volume resistance. Above that, there is Fibonacci 61.8% retrace of at $43.70 and further Volume resistance at $48 (neither shown on chart). MACD is high and RSI just under 70 could use a little cooling off. Good accumulation volume. 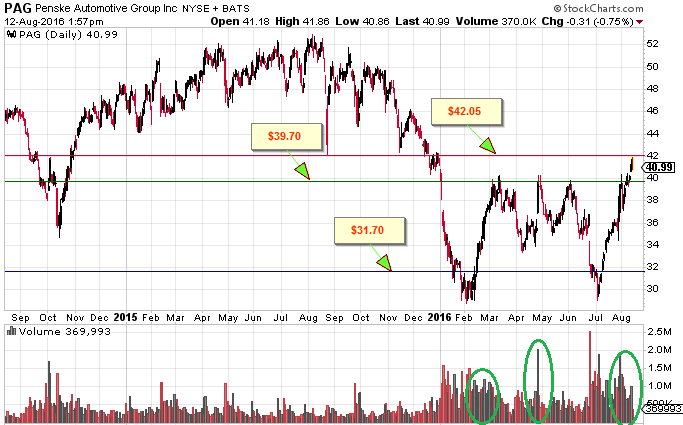 At the height of 2008’s US recession, PAG cancelled their dividend payout. Reinstated in 2011 at 7 cents quarterly, it has seen a penny increase each and every quarter since and is now at 28 cents. PE ratio is at 10.9, below industry peers AutoNation (AN) at 12.7 and Lathia Motors (LAD) at 12.0.

Sales have increased every year since 2011 helped by expansion through new dealerships and acquisitions: FY2015 revenues were nearly double of FY2011. Management is definitely looking ahead and adjusting accordingly. 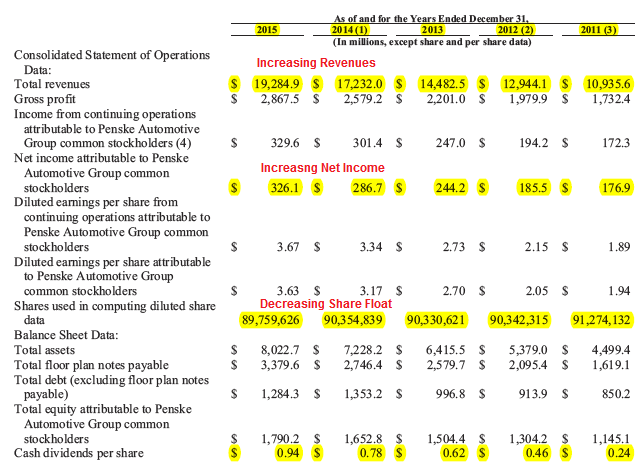