Progyny (PGNY), a leading fertility benefits management company in the United States, would see its stock fall from its 52-week high of $66 in mid-June to $42 earlier this month. A big part of this fall was due to the company’s Q2 earnings on August 5th.

CEO David Schlanger started his prepared remarks by saying that they believe 2021 will be another year where they not only achieve exceptional client retention, but also deepen many of those relationships through upsells and expansions. “In fact, a large number of our existing customers have already committed to service expansions for 2022…We have built a strong pipeline of active opportunities that we are continuing to pursue over the remainder of this year’s selling season.”

Unfortunately, they did revise their outlook for the second half of the year to reflect a lower level of expected utilization for Q3 that began somewhat suddenly at the end of June with a drop in the pace of new appointment scheduling for July and August as compared to what they would normally have expected to see. “I want to be clear that we don’t believe that this is indicative of any macro change in behavior. In fact, 90 plus percent of our members have been going through treatment as we would normally expect. For a small percentage of members, the uncertain and changing external environment appears to have caused a slight pause in their pursuit of treatment.”

Mr. Schlanger added that it was difficult to gauge whether this is associated with the summer vacation season after 16 months in the pandemic or the impact of the Delta variant or both. Fortunately, they’re already starting to see indications in the most recent week that the pacing of appointment scheduling is returning to more typical levels. And while they believe this is an anomaly that will be short-term in nature, they expect it to have a modest impact to near-term results.

JPMorgan analyst Anne Samuel, in a post-earnings note, said she continues to believe that the longer-term momentum for fertility remains intact and the initial commentary around the selling season gives them confidence that the softer guide likely creates a buying opportunity. That said, they will be keeping an eye on utilization trends, which have begun to recover but have not fully rebounded yet.

“In our conversation with management, they spoke to a higher level of upsell than they have seen in the past reflective of the depth of relationships with customers. The three areas of upsell are around pharmacy benefits, additional lives within existing clients, and the addition of smart cycles. Management also cited high retention with renewals of some of their largest clients. Separately, while the CVS partnership is less likely to contribute to the selling season this year given the launch midway through, they noted it is generating a lot of activity and is off to a great start.”

Several months ago, it should be noted that the same JPMorgan analyst had conducted a fertility benefits survey which pointed to fertility as an under covered benefit, with the majority of vendors still the traditional large insurance carriers, and Progyny well respected in the marketplace by those who know of it. They believe this illustrates not only the substantial opportunity to expand the market for fertility benefits coverage, but also the share capture potential for a differentiated provider.

Meanwhile, just recently on August 25th, Barclays analyst Sarah James was out with her own survey, which included 50 large employer benefit managers indicating increasing adoption curve in ’22 for fertility benefits.

“Total dollar coverage could increase 2-6x with added benefits and cycles to the existing client base.”

“Recruiting and retention is a large driver (time series peer pressure impact on p5) as is increasing views that not offering fertility benefits is a discriminatory HR policy – 34% view it as such if not offered in ’22, 53% in ’25 and 57% in ’30. This mindset and trigger word is the same that drove mental health insurance adoption from 35% in ’14 to 75% in ’17 and >85% today.” 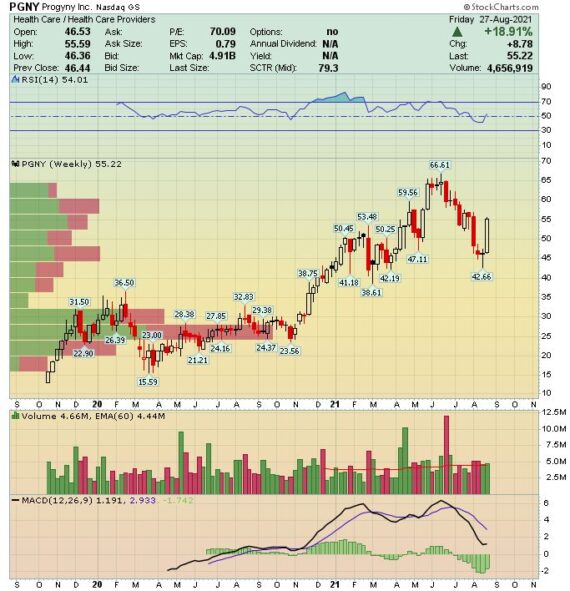