Yesterday, RingCentral announced the expansion of its strategic partnership with Atos SE with the launch of a co-branded UCaaS solution called Unify Office (UO). In addition to the system integrator relationship announced previously, the expanded partnership will now include Unify Office as the exclusive UCaaS offering for the 40 million user installed base of the Atos Unify product family. Unify Office is expected to be available starting August 31, 2020.

This is a step up from the previously announced partnership with Atos, as it will open up the product to more than 1,700 resellers worldwide, and over 90 channel partners that have already been certified to sell Unify Office. The solution is expected to be available beginning August 31st, 2020 for countries including France and Germany, with availability in the U.S. and U.K. coming by the end of the year.

JPMorgan analyst Sterling Auty was out with a note highlighting that Atos management considers a large portion of its 40M installed base to be on legacy solutions currently, indicating that there is significant opportunity to convert those customers to the cloud. When comparing the Atos installed base to that of Avaya, RingCentral management stated that Atos’ customers tend to be younger in the refresh cycle, require more breadth in phone support, skew up-market, and have a stronger international presence. From a customer size perspective, Atos’ stratifications tend to skew larger than RingCentral, meaning that the customers that Atos considers to be small and medium-sized will present up-market and higher lifetime value opportunities for RNG. The added customer base also represents a significant international opportunity since roughly 60% of the 40M installed users exist in Europe.

Craig Hallum analyst George Sutton would add that he believes the announced partnership will help ensure that “the beats go on.” While this partnership will likely take 6-9 months to fully ramp, Sutton is “extremely encouraged” by the long-term outlook for the stock, given the growing list of long-term partnerships that should be valuable sources of growth for several years.

In a July 6th note from SunTrust Robinson analyst Terry Tillman, he comments that the company announced RingCentral Cloud PBX for Microsoft Teams enabling Direct Routing integration – this integration provides users with more robust cloud PBX capabilities without having to leave the Teams interface on mobile, web, and desktop. “We believe this could represent one of the more meaningful growth catalysts ahead for RingCentral as it continues to ramp enterprise business. The integration includes a variety of features such as call controls, interactive voice response (IVR), call handling and call queues, open platform and API capabilities, native call recording, and analytics and call reports, among others.” 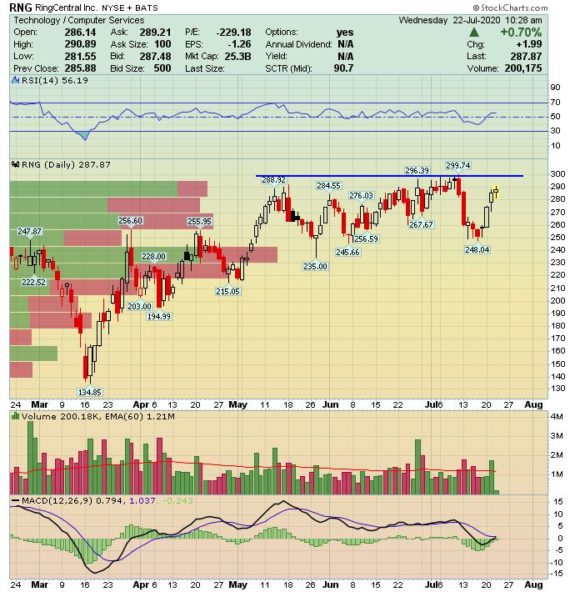