Last week, in the Webinar, Fahad briefly discussed this stock after seeing buying of over 3,000 February in-the-money 24 call options for up to $3.30.

Looking back to its Q3 earnings, the company highlighted that within the Lottery group, it continues to drive significant revenue and profitability growth as it saw a 6% increase in revenue and an 8% increase in EBITDA which was driven by strong Y/Y growth in systems and in lottery instant products with strength both domestically and internationally. Management said in the last 52 weeks, the high margin instant product market has grown domestic retail sales by over 2 billion Y/Y and SG represented more than 80% of that growth. “The team is delivering its best ever win rate on contract re-bids and winning significant new deals domestically and internationally.”

This prompted Stifel analyst Brad Boyer to say in his post-earnings note: “The Once Sleepy Lottery Business Continues to Fire on All Cylinders.” Perhaps more importantly, Stifel said that SGMS continues to celebrate several big wins and in aggregate, believe these deals should benefit Lottery segment results moving forward, “the full magnitude of which is not reflected in our revised forecast.”

Regarding the Lottery pipeline, management would highlight the following from the earnings call:

-Also, in Florida, it will continue their 30-year partnership with the award of a new 7-year SGEP contract which has an option to be extended for an additional 7 years. “Since 1997, Scientific Games’ enhanced partnership has powered the Florida lottery instant games to perform 52% better than the lottery industry average with a 10-year compound average growth rate of 22%. In fact, when looking at all of our SGEP customers, they have experienced a 10-year CAGR that was 80% higher than lotteries served by other contract vendors.”

-Finally, the company continues to expand its lottery footprint with wins in Italy, Turkey and the recently awarded Brazilian Lotex concession. Specifically, in Italy, it was awarded with an exclusive agreement to supply 30,000 WAVE retail terminals making it one of the largest lottery terminal point of sale networks in the world. 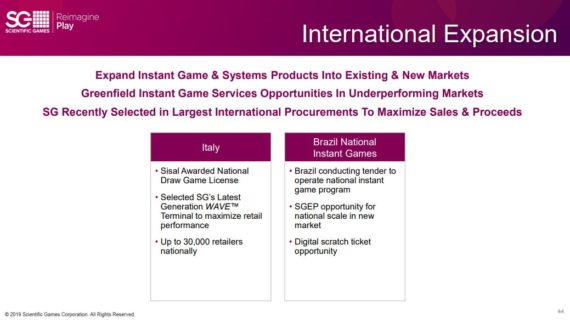 Stifel would then upgrade Scientific Games on January 8th to Buy from Hold as well as raising their price target to $37 from $30. Again, they would argue that the company’s recent success within the global lottery business has been one of the most underappreciated stories in gaming over the past 12 months. In addition to several sizable new contract wins in Italy and Turkey, the company continues to make progress with its SGEP outsourced management offering to state lotteries and is slowly driving greater customer adoption of its game-changing SciQ instant ticket technology. Lastly, SGMS recently partnered with IGT to secure a lucrative Brazilian instant game lottery contract, which could begin bearing fruit as early as 3Q20. “All told, given the complexities associated with accurately modeling the sizing and timing of these various lottery growth endeavors, we believe successful execution on one or more initiatives could drive significant upside to our current Lottery segment AEBITDA forecast.”

Since the Q3 earnings report, a number of Lottery-based headlines have crossed the wires:

December 4th – Announced the Ohio Lottery Commission has awarded the company a new four-year contract for its Scientific Games Enhanced Partnership to manage all aspects of its instant “Scratch Off” games.

December 5th – Announced that the Massachusetts Lottery has awarded a new contract for a lottery retail management system to Scientific Games. The new system aims to provide the Lottery with a more productive and streamlined connection to its network of over 7,500 retailers.

December 10th – Received a 3-year contract extension from the California State Lottery. It will continue as the lottery’s primary provider of instant games and associated services through November 2022 with optional extensions through 2025.

December 18th – Announced that the Pennsylvania Lottery has awarded the company a new contract for iLottery online/mobile games following a competitive procurement process. 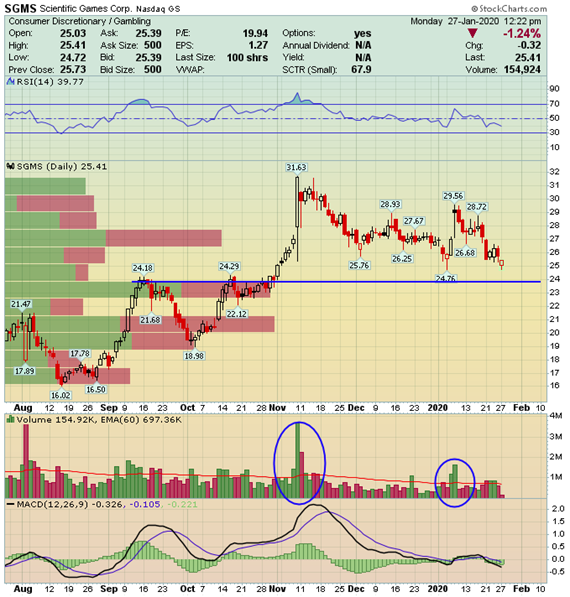