Recently in both Conversations and Weekend Research (Click HERE to Subscribe), I brought this stock up and discussed Ethylene Oxide and its role within medical devices. I highlighted upcoming Ethylene regulation in 2022 as well as litigation cases in Illinois, Georgia, and New Mexico (with the first case hearing happening on October 28th in New Mexico).

While those discussions focused on the company’s Sterigenics business, I thought I’d provide a new update on its other two segments: Nordion and Nelson Labs.

Nordion (14% of Total Revenue) – Within this segment, the company is a supplier of Cobalt-60, which is used for gamma sterilization (in other words radiation therapy). On its prior earnings call, management said that revenue increased by 16.6% Y/Y and admitted that performance was better than originally expected as some sales previously anticipated for the second half were instead realized in Q2. As a result, Nordion’s second half of the year revenue is expected to be lower than the first half of the year but still with full year revenue better than what they were expecting at this time last year.

RBC Capital analyst Sean Dodge was out on September 13th with some high level views pointing out that Nordion is by far the leading supplier and has exclusivity agreements with nuclear facilities spanning multiple decades. Still, demand is outpacing supply. Given the recurring nature of the business – Cobalt 60 decays at a rate of 12% per year, meaning end users need to replenish supply regularly – Nordion is making ‘once-in-a-generation’ investments into several facilities over the next few years. Additionally, they point out that another competitive advantage for Nordion is that it has the only fleet capable of delivering Co-60 to customers within the United States.

Nelson Labs (25% of Total Revenue) – Within this segment, they are a provider of pharmaceutical lab testing and advisory services. In Q2, the company grew revenue by 13.9% Y/Y. Management said that what they saw in Q2 was PPE-related testing going from a tailwind in recent periods to a 5% Y/Y headwind. On the other hand, non-PPE testing delivered enough organic volume growth to offset that decline. This was Nelson’s strongest quarter since the pandemic began for these non-PPE testing services, which grew 6% in volume and mix.

RBC Capital acknowledges that there is a significant growth opportunity remaining for Nelson Labs. They point out that a key driver of Sterigenics’ acquisition of Nelson Labs (in 2016) was the potential to cross-sell sterilization services to Nelson Labs’ clients and vice versa. 40% of the lab testing activity relates to the sterilization process. It also houses other faster growing segments including extractables and leachables that are helping to push Nelson Labs’ revenue growth rate up to the HSDs (vs Sterigenics MSDs and Nordion LSDs).

“We believe Nelson Labs can continue to take share in the highly-fragmented, $29B lab services market based on the following differentiators: (1) Its thought leadership position in terms of regulations—the FDA comes to Nelson Labs for advice, (2) Its specialized testing solutions that set it apart from larger players that offer more commoditized, low-margin solutions, and (3) Its breadth of these specialized services(>800).”

RBC adds that the company plans to remain acquisitive in the space (having acquired Toxikon and Gibraltar in 2017 and 2018, respectively) to expand its presence in the pharmaceutical end market which currently reflects the vast majority of segment TAM (~80%) but the minority of revenue (~30%). 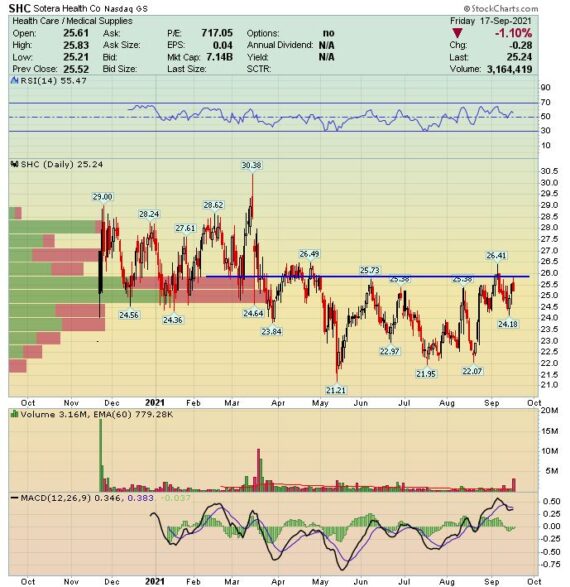