TE Connectivity (TEL) – With $12.2 billion in FY15 sales and a market cap of $22 billion, TE Connectivity is the world leader in component and sensor solutions with a broad range of  technologies. They operate in three industry segments with automotive sector bringing in 52% of overall revenues.

TEL’s specialty is harsh operational environments the likes of unforgiving hot engine compartments, airplanes, high pressure undersea applications, washers and dryers. Extending their role beyond fittings, they also manufacture customized wire harnesses, along with the connectors, to their customers’ criteria.

TEL pays out a quarterly dividend of 37 cents, yielding 2.4% annually. Over the past eight years they have repurchased $5.4B of their stock.

Recent reports show that European car registrations grew +16% y/y in May, bringing the total to 33 straight months of increases. Outside of Brazil and Russia, the new-car market is holding relatively well. US sales are also showing signs of improvement, mainly in larger vehicles and trucks. Going further abroad, in a recent conference the company’s CEO said that based on the recovery at the tail end of 2Q’s decline, they expect China’s growth to be stronger than the first half, with a possibility of double digit growth (10%-12%).

Overall organic growth was lower in the first half of 2016 due to FX impact, and is expected to improve towards “mid-to-low high single digits” for the full year. 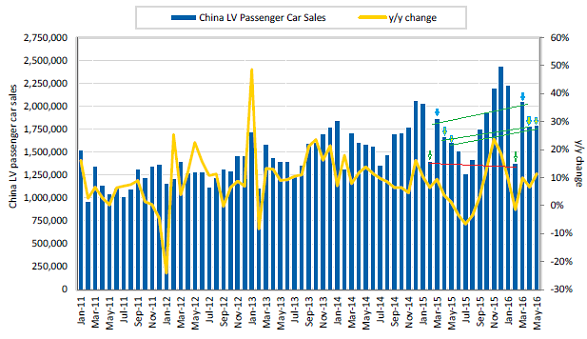 On a slightly negative tone, North American commercial vehicle sales are soft with Class 8 orders down 30% y/y in May. Balancing that to some extent are European registrations registering a 17% increase YTD. With oil price’s recovery injecting renewed vigor to the O&G sector, sales are anticipated to improve in the coming months.

TEL should also benefit from increased production of Electric Vehicles (EV), mostly from the complexities of  higher voltages and separate electrical systems that requiring additional modules. Management expects to have a higher market capture in EV sales than conventional vehicles. Ultimately, TEL hopes to double or triple their overall per-car market share but does make it clear that this is a gradual process over a number of years.

In late May Microsoft (MSFT) and Facebook (FB) announced that they would be jointly  building a 4,000 mile-long Trans-Atlantic subsea cable named ““MAREA”. RBC analysis estimates this contract alone to be worth upwards of $250 million, adding to TEL’s $1.0 billion+ firm backlog in this sector. Project start date is August 2016. The subsea business is set to contribute about $850 million in FY16, a 20% y/y growth that the company expects to continue well into next year.

This sector was down in FY15 led mainly by the Oil and Gas sector while Aerospace and Defense was mainly flat. Revenue in Q2 was $738 million, down from $797 million q/q. With energy turnaround in first half of 2016, revenue stream should pick up.

On June 17th RBC reiterated their Outperform rating with a price target of $66. Aside that, there have been four downgrades in 2016. Any of those analysts changing their view based on recent positive industry data could send shares higher very quickly.

Recent increase in share price has hit possible overhead resistance and congestion near $62. It has also been climbing up on support and congestion at around $59.25. There has been bullish buying volume of late. Options are sparse and not indicative of any direction at this time. 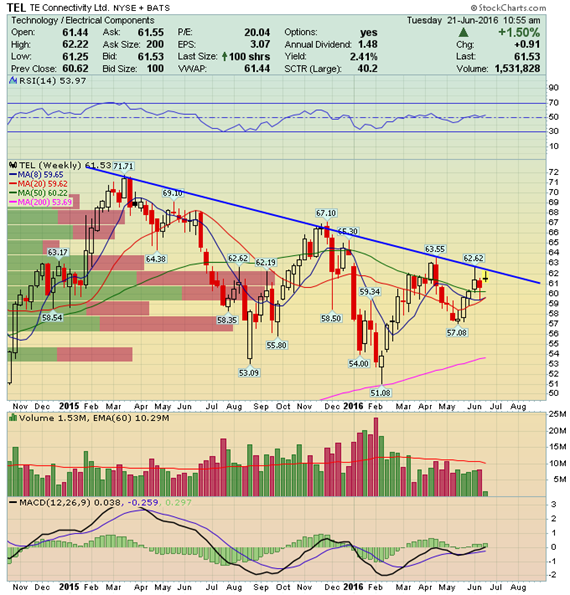 Global auto production for 2016  is forecast to increase ~3% with a lot of positive data out for the month of May, including China’s sales up 11% y/y. US SAAR at 17.4 million was above consensus of 17.3 million. The average age of cars stands at 11.2 years, pointing towards the direction of upcoming new replacement purchases. Electric vehicle sales are up, a market that requires more sensors and circuitry than conventional cars. There are also signs of housing market improvements which traditionally translate to new appliance purchases. Oil and gas sector has been picking up as of late and the aviation sector is still going relatively strong overall.

The second half of 2016 could prove to be a profitable time for TE Connectivity as many of the sectors it services are signaling improvements.