It should also be noted that TechnipFMC is currently the #7 Holding (4.79% weighting) in the Oil & Services ETF (OIH), which was covered in Monday’s JaguarLive session.

In terms of guidance for Subsea, FTI forecasts approximately a 10% Q/Q top line improvement in Q2 on seasonal tailwinds, which should be able to drive EBITDA margins +200bps higher Q/Q to 12%. Surface Technologies results were guided to be softer than previously anticipated, with FTI anticipating +HSD% revenue growth sequentially, which should result in Q2 Surface EBITDA of $28M. This weaker outlook is largely attributable to margin headwinds from the transition to a new facility in Saudi Arabia, which FTI estimates to be a 200bps drag on EBITDA margins.

On the conference call, management would say, “We are investing in new manufacturing capacity to support the strong Middle East outlook. As previously highlighted, we are transitioning to a new facility in Saudi Arabia, which was expected to be a headwind to our financial results in the period. The qualification of the facility is extensive and the process has taken us more time than previously anticipated. We are now undergoing final production testing and expect final certification of the facility by the end of the second quarter, at which time we anticipate an acceleration of orders in country. We remain confident in meeting our full year expectations as we have secured plans to accelerate recognition of these orders.”

Separately, management is also anticipating that strong order growth will continue as it will book the lion’s share of the subsea production system at Exxon Mobil’s (XOM) Yellowtail development in Guyana that includes 51 trees, 12 manifolds, and a flexibles contract for 6 risers in Q2.

In their post-earnings note, BofA highlights the company’s “leaner and smarter Subsea 2.0 product platform,” which management expects to account for 50% of orders over the next couple of years. FTI has developed a configure-to-order (CTO) model which will drive further simplification, standardization and industrialization across FTI’s Subsea business, allowing for 25% cost savings & 50% reduction in product delivery time vs the legacy engineered-to-order model. 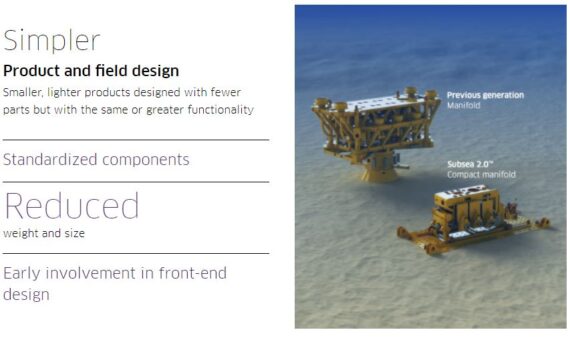 Finally, on May 17th, JPMorgan was out with a note following meetings with management, including CEO Doug Pferdehirt. They would highlight three key takeaways:

(1) After several years of restructuring following the 2017 FMC Technologies-Technip merger, FTI has finally emerged as a “clean” story.
(2) Favorable macro tailwinds are not only a short-cycle shale phenomenon, but are being felt offshore too.
(3) The company’s balance sheet progress is ahead of schedule, which could put it in a position to return cash to investors sooner than the analyst day timeline of 2H23.

In addition, with regards to Subsea 2.0, JPMorgan commented on how back in 2017, the company first introduced this offering, which reduced the size, weight, and part count of subsea trees, manifolds, and other equipment by nearly 50% from the previous generation. “The systems are based on a modular design using standardized components to reduce the amount of engineering time and lead times associated with deepwater developments, which can significantly speed up the time to first oil by up to 12 months. In addition to a reduced footprint, the Subsea 2.0 architecture allows for a much more efficient integration of subsea production systems (SPS) with the subsea umbilicals, risers, and flowlines (SURF). FTI expects more than 50% of its inbound tree orders to be Subsea 2.0 orders over the next two years. We expect for operators to prioritize tie-back opportunities given the robust commodity price environment.” The company recently secured a Subsea 2.0 frame agreement from TotalEnergies (TTE), which has announced encouraging discoveries in Suriname and Namibia. 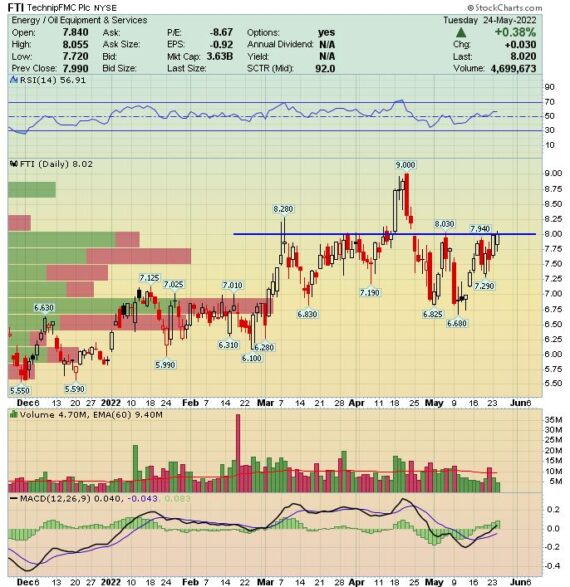