TFI International (TFII) – A Gem from The Great White North

Headquartered in Montreal, Canada, TFI International (TFII) is a leader in the transportation and logistics industry, operating across the United States, Canada and Mexico. It is diversified across multiple geographies, industry verticals and business segments, including Package and Courier, Less-Than-Truckload, Truckload and Logistics. 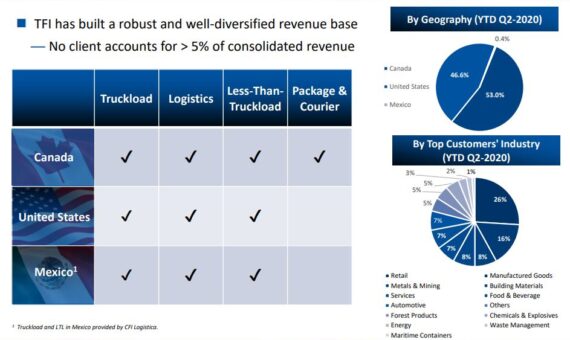 This name caught my attention recently as Stifel was out calling it a “Hidden Gem,” and how they continue to the stock is the most underappreciated and undervalued quality company in the public transportation space. This commentary came after the company’s Q2 results on July 27th where it exceeded expectations, reporting adjusted EPS of C$1.04, ahead of Street consensus at C$0.53. Meanwhile, it reinstated FY2020 guidance at $3.40 to $3.75 in EPS, and free cash flow of between $425M and $460M. JPMorgan highlighted that the stock significantly outperformed for the second straight quarter as management navigated the recent volatility well and business activity recovered faster than expected.

Looking over its specific segments:

Truckload – This segment makes up 46% of Total Revenue and while revenue before fuel surcharge declined 17% Y/Y, its operating income of $70M was up 3%, partially due to the Canadian Wage Subsidy of $15M. Stifel analyst David Ross said that the strong performance, with an 85% OR, was driven by cost control and execution. And even though it benefited from a weight subsidy from the Canadian government, the OR still would have been a healthy 88% ex-subsidy. “What makes TFI’s TL division different from some of the public peers? Nearly 1/2 is specialized – tanks, flatbed – not dry van. Management likes that, because it’s less commoditized than dry van. Also, 1/3 of the fleet is owner-operators (and they added more in 2Q20), requiring less capex.”

Meanwhile, Credit Suisse pointing out that the company highlighted increased demand in the Truckload space due to: 1) Shutdown measures subsiding, 2) Increased near shoring opportunities, and 3) More freight coming out of Mexico. Meanwhile, capacity has been tightening with drivers sitting on the sideline owing to stimulus measures and COVID -19 concerns. As such, given increased demand coupled with tighter capacity, TFI believes there will be opportunities to win higher rates – although Credit Suisse recognizes some of the factors supporting the improved Truckload environment may be transient.

Logistics & Last Mile – This segment makes up 24% of Total Revenue and in Q2, it saw revenue before fuel surcharge grow 8% Y/Y. Meanwhile, operating income of $23M was up a very solid 27%, excluding the year earlier bargain purchase gain of $11 million, reflecting a 130 basis point increase in margin to 8.6. Stifel is looking for this segment to be a main area of growth in the coming years.

Package & Courier – This segment makes up 14% of Total Revenue and it certainly saw a “rapid” decline in business during April. However, management soon saw a rapid pick up in B2C, taking the place of much of the B2B business that had slowed. CEO Alain Bedard commented, “We were able to profitably take on this new B2C activity, as so much of it came on quickly allowing us to achieve immediate density in the region we choose to service. Due to the rapid replacement of business, our overall activity improved and in the month of June represented approximately 1.5 of our full quarter packaging and courier operating income.” Looking ahead, the company expects this segment to permanently benefit from the shift that occurred during the quarter, as they expect to keep a portion of this new B2C business while B2B eventually recovers. In addition, they believe that they can quickly scale capacity in terms of both drivers and trucks to meet the increased demand. Stifel said this was the area the company was most nervous about due to the closure of many B2B customers, but results came in much, much better than expected.

One of the items that jumped out at me when reading over the transcript was their involvement in M&A. In June, the company said it further expanded their specialized truckload operations with the acquisition of Gusgo Transport, enhancing their container transport and storage capabilities, while adding density, geography reach and new customers. Also, during June, it had a compelling opportunity to add to their core of selected assets with CT Transportation and MCT Transportation, further adding to their specialized truckload capabilities. “Both are excellent strategic fits with strong customer overlap, and network synergies throughout an expanded geographic reach in the U.S.”

Then, a few days later on July 31st, the company announced that it had acquired Keith Hall & Sons Transport, or KHS. Per the press release, KHS is headquartered in Burford, Ontario, generates approximately C$30M in annual revenue, and began in the milk hauling business but now hauls liquid, dry foods and general freight across North America.

When asked about future deals in the Q&A session, CEO Alain Bedard would say, “So I think that the environment for M&A is okay, with about $1 billion in available funds, I think it’s the way to go for us. It’s in our blood, that’s what we do for 20 years and more.”

Credit Suisse analyst Allison Landry commented that TFI reminded us that its capital allocation strategy does not change regardless of the macro backdrop. To this end, the company acquired 3 small tuck -ins during Q2 – which should drive consolidation synergies in Canada, as well as expand its presence in specialty/flatbed TL in the U.S. Looking forward, relatively higher priority targets include U.S. logistics and LTL in Canada. “It remains prudent in its acquisition strategy, with its highly disciplined approach including requirements of immediate accretion to EPS and FCF, strong, existing management, and clear synergy and growth potential.” 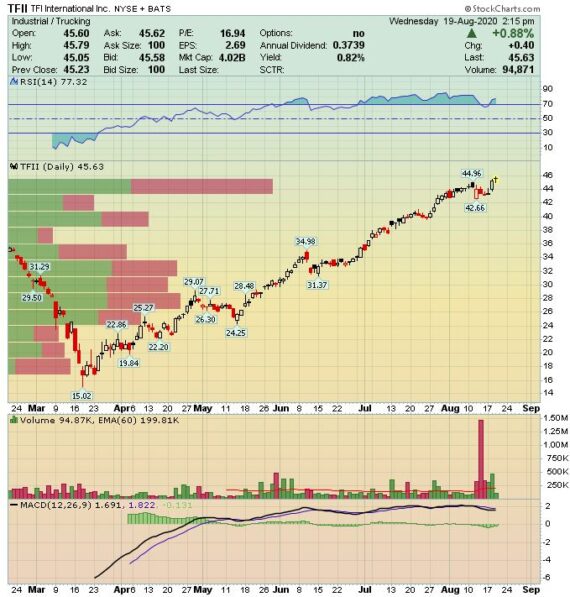