Recent channel checks provided by Stifel analyst Jonathan Block paint a rather weak picture for the entire animal health group. The lone bright spot, as you will see, relates to shares of IDEXX Laboratories (IDXX).

Per VetSuccess, patient volume growth has been falling each quarter of this year. In Q1, volume was down 3.4%, which then decelerated further to -3.9% in Q2 and -3.8% in Q3. Unfortunately, for the month of October, visits were down 4.1% and this trend had remained unchanged into November.

U.S. scanner data for specific OTC parasiticides continues to “reflect a challenging, and arguably worsening, environment.” To be more specific, the table below shows how U.S. scanner sales from five specific products are down -25% Y/Y Q4-to-date. This is the fourth quarter in a row where Y/Y OTC Parasiticides growth has decelerated, and a notable worsening from Q3 results of -15%. For Elanco Animal Health (ELAN), the scanner data shows both Seresto (-29%) and Advantage (-27%) decelerating notably. As a reminder, on Elanco’s recent Q3 earnings call, a portion of the 2022 revenue revision was attributable to accelerating share losses in the U.S. parasiticide market as more volume moves to scripted products, notably Simparica Trio from Zoetis (ZTS). 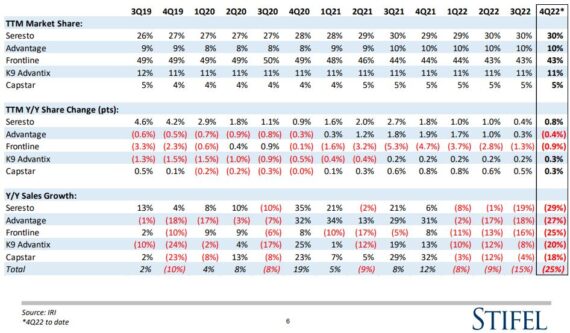 In the month of October, U.S. cattle placements on feed declined -6% Y/Y, which was the third straight month of decelerating growth. The 3-year CAGR in October also worsened, posting growth of -5% compared to a +4% 3-year CAGR in August and flat CAGR in September. “At 2.108MM placements, this is the smallest number of October placements over the past 25+ years and could be suggestive of a drought-driven pull-forward that may have occurred earlier this year.”

At the beginning of this year, IDEXX Laboratories announced a collaboration with PetDx, which is known as “The Liquid Biopsy Company for Pets.” The press release highlighted OncoK9®, PetDx’s liquid biopsy test for the detection of cancer in dogs, will be available to all veterinary customers, in the United States and Canada, served by IDEXX Reference Laboratories. At the VMX Conference this year, Stifel’s checks suggested that PetDx was selling OncoK9 for $375-400 to the Vet, and recommending the Vet sell it to the pet owner for $499.

“At the beginning of the year, we started tracking the number of Veterinary practices offering OncoK9, and we identify solid month-over month traction. Immediately after the collaboration was announced, the number of OncoK9 practices increased +68% in February versus January’s modest base. This then increased another +15% in March, after which growth accelerated in April to +26%, and while May’s sequential growth stepped down to a still healthy +13%, June growth accelerated to +17%, with July and August maintaining +LDD% growth (+12% and 15%, respectively). For September, M/M growth slowed to +HSD% (+8%), the first time it was less than 10% since we started tracking the data at the beginning of the year, but then modestly reaccelerated in October (+10%). If the practices’ utilization of OncoK9 starts to ramp (potentially used for both aid-in diagnosis and screening), PetDx’s OncoK9 test may act as a modest revenue tailwind for IDEXX into 2023.” 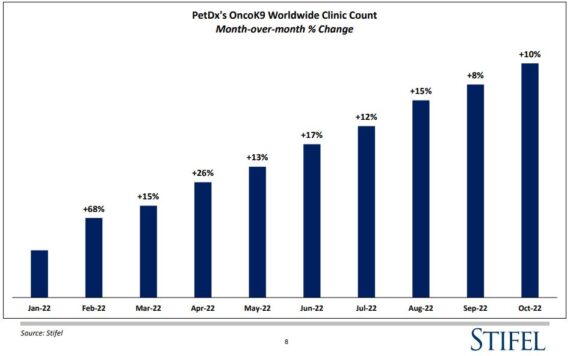