U.S. Silica Holdings (SLCA) is one of the largest suppliers of proppants, providing frac sand to operators throughout the US and Canada.

Since Crude’s downturn in late 2014, sales and production have declined as exploration and new well completion activity has been markedly reduced. Share prices have declined throughout the Energy sector as revenues and earnings have diminished.

Crude appears to have put in a bottom in February 2016, reversing course to regain part of the large drop. Renewed optimism and interest in the sector also rejuvenated almost all names within with prices rebounding resolutely off their lows. Industry expectations for Crude’s prices are forecast to be in the $57-$60 range for 2017-2018, a further 25%-30%  increase from these levels. Technically, WTI could be retracing down to its 200sma of about $42 at this time.

SLCA shares have been trying to get above the $35 mark for a few weeks now, hitting the overhead resistance on repeated occasions with good volume. It offered two very brief pullbacks, on the back of the Brexit vote, otherwise trading range has been narrow with very little magnitude of pullbacks.

You Can’t Use Just Any Sand

Frac sand has to meet stringent API & ISO standards, it’s not as simple as using whatever dirt is laying around. There are regulated requirements for various grain sizes, uniformity, moisture content and chemical treatments to fit whatever stage or condition a well might be at. Production of frac sand is concentrated in the US Midwest, led by Wisconsin.

In late March, SLCA raised $174 million through a secondary offering of 8.7 million shares. At this time, they have around $460 million in cash and have hinted at the possibility of acquisitions to expand their market share. Long-term debt stands at $488 million with zero short-term debt. Dividend yield is 0.72%, distributed quarterly.

In terms of Proppant quantity sales, total tonnage has dropped 16% (Q1 2016 vs 2015), however that has been compounded by a price drop of 41% per ton. Total revenue for the same time frame dropped by 40%. Prices of frac sand are expected to remain stable and turn upwards in mid-2017. 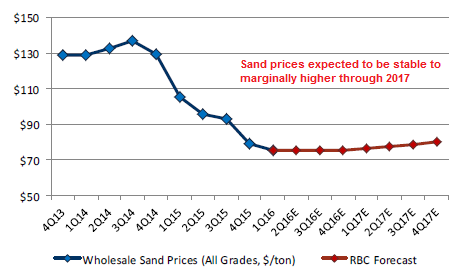 North American energy cycle recovery is typically led by land drillers and frac services and it is anticipated that this will not be different this time around. RBC Capital expects frac sand to be one of the top-3 performing olifield services (OFS) sub-sectors in the initial recovery phase in 2017. It has already led all OFS sub-sectors off the February bottom.

US Silica also has capital and liquidity to take advantage of the industry’s weakened prices through M&A, further increasing their market share. Presently, they lead with an 18% share in Raw Sand, followed in second place by Fairmount Santrol (FMSA) at 17%. 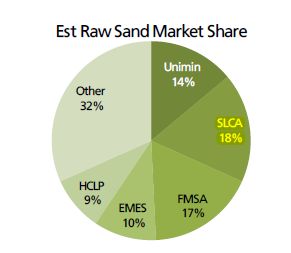 Jefferies upgraded SLCA to Buy this morning, stating “we assume sand demand in 2020 is 60% higher than the peak rate set at the end of 2014”. This bolsters RBC’s view that proppant amounts used per stage/well has been significantly underestimated. Rig counts have been slowly improving, at the very least they appear to have bottomed. With over 6,000 dug but uncompleted wells at this time in North America, any renewed drilling or well completion activity would directly benefit SLCA. 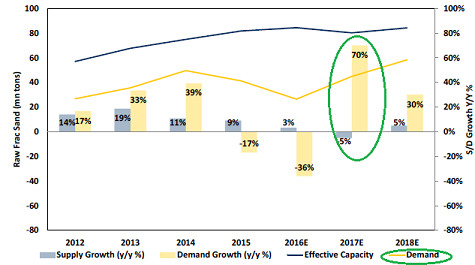 Eight of the ten analysts covering SLCA are Bullish on the company, with the other two being neutral. Median price target  is $32, not including today’s Jefferies target of $41.

Share price popped above $35.50 on today’s upgrade. Also holding very nicely above rising trendline from February’s lows. RSI a little high at 62 and MACD can also come down, pullbacks have been short and quick to turn around. There is volume support at $32 and $21.75 areas. 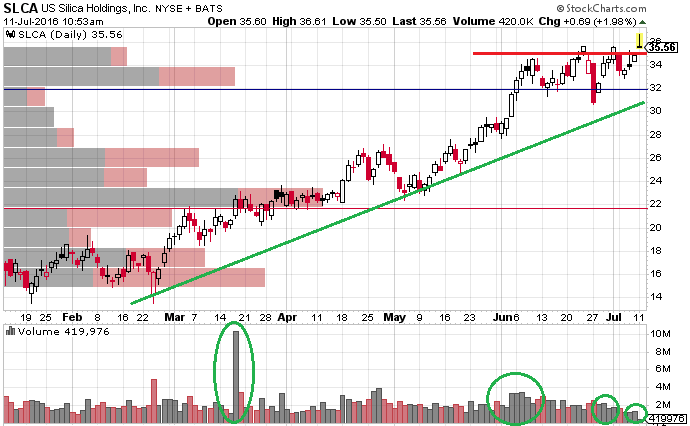 SLCA shares have the potential to return above $40 with sustained Crude recovery. If the estimates of $55 crude materialize in 2017, there is a good probability that SLCA sees mid-$40 mark.