(These earnings plays were sent to clients on Sunday, April 10)

Alcoa (AA) – Reports earnings on Monday, April 11, after market close. We are modestly bullish on stock despite some Q1 weakness in aluminum prices. Lets take a look at piece by piece of different business segments: Automotive (positive) = China automotive sale are +4.7% QoQ and +21% YoY. This was primarily driven by government new tax incentive for smaller engines and lower emission cars. Trucks (negative) = Expected to be flat or even down low single digit percentage, driven by oversupply and collapse in energy markets. Construction (positive) = North American Non-residential contracts are +8.6% YoY and Housing Starts are +11% YoY. Europe is flat and China is tracking +2% YoY.

Aerospace (major positive) = This is the main reason for our bullish call. Late 2014, Alcoa closed acquisition of Firth Rixson which gave the company commanding lead in high-growth aerospace platforms such as Boeing 777 and 737. In past 12 months the company has announced $10 billion worth of aerospace contracts. At Analyst Meeting in November 2015, company guided FY2016 aerospace EBITDA of $1.6 billion, sharply higher from $1.1 billion in FY2014. We expect in earnings call management to make the strength in aerospace its focal point and investors to warm up to stock price. We believe that aerospace in 2016 is going to grow 8% to 9%. The large commercial aircraft segment, we believe, will show a growth of 15%. The good news also is the fundamentals are solid, 6.9% passenger growth and 2.8% cargo demand.

Technically, the chart is forming tight Bollinger Bands, setting up for volatility squeeze which means it can go sharply in either direction. Typically in such scenario we would advocate buying strangles such as May 9 Puts and May 10 Calls, for net cost of $0.83. But given our fundamental bullish view, we like the idea of going with straight calls as directional bet. 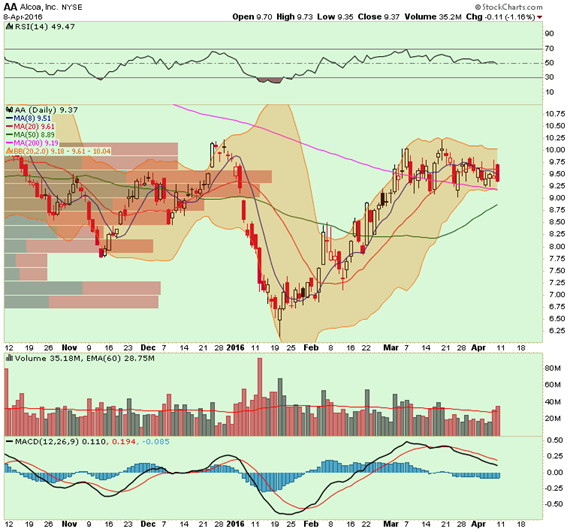 Doesn’t bode quite well for sentiment when you consider the stock is up 30% since February low. FAST continues to feel the impact from its customers’ belt tightening given some dramatic declines in their businesses (half of FAST’s top 100 accounts saw declines in Q4). Margins will also face headwinds as FAST anticipates negative customer/product mix (FAST insists this not a structural).

The consensus FY2016 EPS consensus estimate has gone from $1.92 to $1.79 since the beginning of year. If we apply 5-year high end multiple of 22x from good times, we get price target of $39.3 while stock currently trades at $47. Leap put buyers have also been pretty active in FAST with 12,000 open interest in Jan’17 $40 puts, steadily rising since early February. 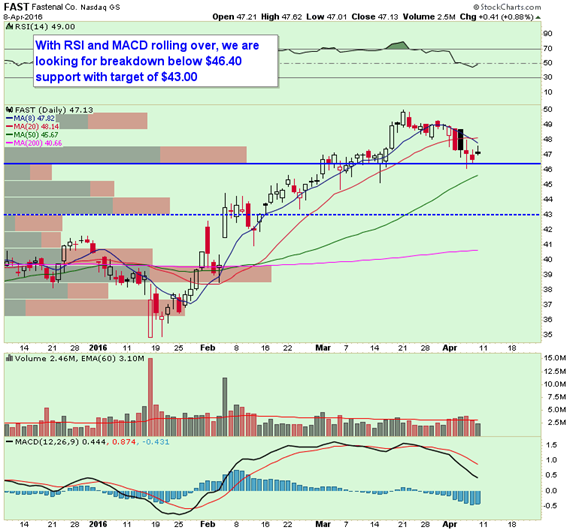 Xura (MESG) – Reports earnings on Friday, April 15, before market opens. To be clear, this earnings play is more on speculative side with limited amount of research available. We like the news flow in past 3 months and extremely low valuation in high growth markets, we believe this could sharply surprise to upside as sentiment improves around outlook.

Xura is small $473 million under the radar small cap stock, formerly known as Comverse. Provider of cloud-based and in-network services enablement and monetization software solutions for communication service providers (CSPs) and enterprises. The company went through string of acquisitions to boost product offering while divesting some assets, which created noise in quarterly figures and resulting in delayed filings. With Comverse and Acision now closed, we should see cleaner set of results and guidance, which we expect to be $375 to $400 million in revenues and $85 to $100 million in EBITDA for FY2016. That spits out forward valuation ratio of 5x EBITDA, very low compared to peer. As synergies are gradually realized, we expect Q1 revenues of +15% growth YoY, accelerating to +17% in Q2 and above +20% during second half of FY2016. We also expect cash flow will steady increase and turn positive by year end after posting negative $141 million last year.

Our fundamental bull case rests on couple things: 1) most of their digital product and services are distributed remotely via a cloud-based system of which 40% is recurring and rising which creates visibility and case for multiple expansion, 2) EBITDA margin expansion with continued realization of synergies after dramatic shift in business model with at least 6 acquisitions and multiple asset sales in past 12 months.

Reason we like going for July instead of earlier month is to have enough time in our hands to see the restructuring come through and let Wall Street analysts catch up to changing story. Stock has very little coverage at the moment. 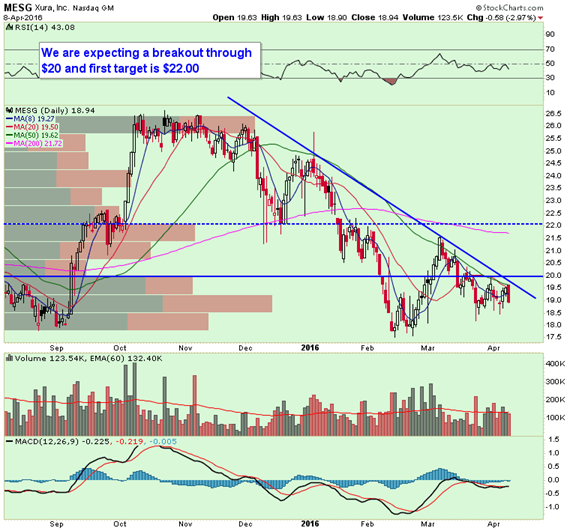