Bristow Group is $1.17 billion market cap, a provider of helicopter services to the offshore energy industry. The Company has transportation operations in many most of the other offshore energy producing regions of the world, including, Gulf of Mexico, Australia, Brazil, Canada, Russia and Trinidad.

It is no surprise that with sell off in crude oil, offshore drilling has essentially come to a halt. Big integrated oil companies are cutting capex as fast as possible and it is taking a toll on BRS stock. Consider that at start of 2015, the consensus view for this year EPS was $5.77. After January it was cut to $5.00. In April it was cut to $4.20. In July it was cut to $3.30. Are there more cuts to come? Rig count is still declining as reported by Baker Hughes this morning which means capex cuts are still occurring. So, we don’t think this story is over yet. Management is cutting cost as fast as possible as means of survival with announcement of $90M cost cutting program last quarter, increased from $60M announced previously in the year.

Down cycles in energy space are not fun and eventually BRS will likely appear with cleaner balance sheet. But we believe this story gets worse before it gets better with plenty of tailwind from energy sector to hit top line revenues. Technically, the stock has risen sharply on short covering back to 50-day moving average and stalling here. We are looking for retest of $25 with stop loss at $37.50. Earnings on November 5. 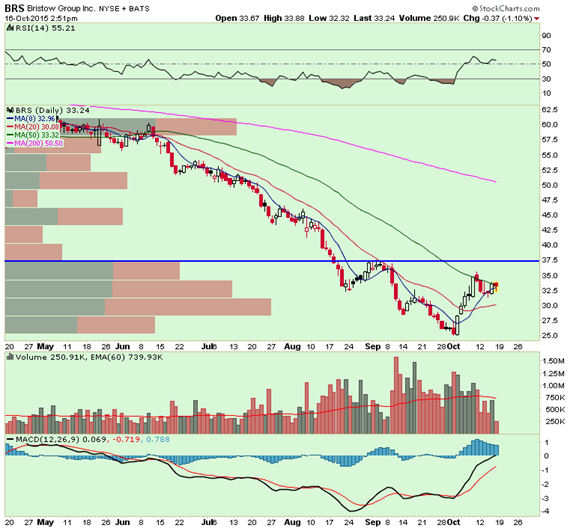