Celanese (CE) – Reports earnings on Monday, April 18, after market close. The $10.2 billion specialty chemical trades at 1.8x sales, 10.9x forward earnings and 15.2x cash flows with 1.73% dividend yield. To get a clue on underlying dynamics in Q1, we went to see what chemical companies had to say at 2016 IHS Petrochemical Conference in Houston in mid March. Here are takeaways: 1) US spot ethylene prices continues to show improvement, having risen 11% from February low as the heavy US turnaround season is now underway. 2) Polyethylene producers increased prices by $0.05/lb for the March contract price and potentially an additional $0.04/lb in April. 3) Chlorine and PVC are entering their seasonal strong seasons (construction/housing). Therefore, data shows at least some of the $30/ton price increase announced in chlorine and the $0.05/lb announced PVC increase are expected to stick in foreseeable future. 4) Global methanol prices remain relatively weak, but improving sentiment out of Asia could drive spot prices higher over the near-term. One example of this was Celanese announced a RMB 100 per metric ton increase in China.

Putting all this in perspective and looking at FY2016 EPS consensus view of $6.33 which hasn’t changed since October last year, we believe the story is stronger on Main Street than what is assumed on Wall Street. We are bullish going into earnings. Separately, there is another element to consider that could serve as icing on the cake. CE in January discussed that they are in the market to acquire Nylon assets. HON announced in March that they are looking to sell their Nylon assets for up to $1 billion (priced around 4x EBITDA). We believe the match makes sense and would be immediately accretive to earnings if CE buys those assets. We may hear more about this in earnings conference call on Monday. 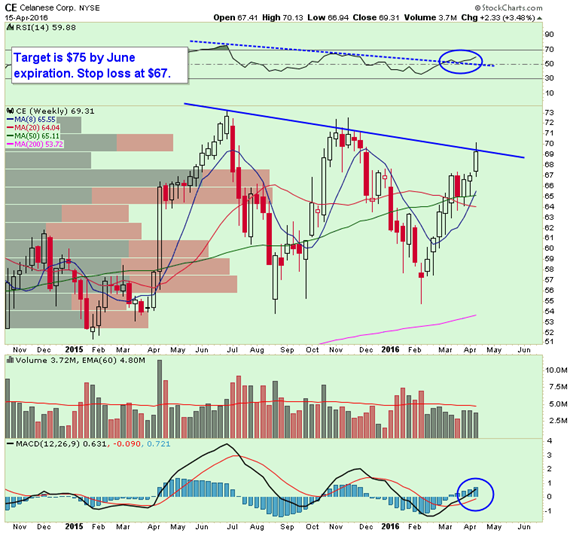