(This trade idea was issued to clients last week on May 17. To be fair, we closed the trade yesterday with decent profits ahead of earnings. Stock popping even higher today well above our expectations after solid quarter)

In see of red in retail space where 90% of retail stocks got slaughtered in last 2 weeks, relatively speaking DG is holding well near 52-week high and continues to hold major gains posted after big breakout on high volume after Q1 earnings. Next report is out on May 26 before market opens and here is something noteworthy:

On March 10, company posted +2.8% SSS growth for quarter ending January 2016. Also announced $1 billion share buyback. Stock jumped. Then on March 24 at Analyst Day, they reiterated 2% to 4% SSS growth, the mid point of which was slight acceleration from prior quarter. Since March 24 was more than half way into the quarter already, one would think they already had good read into the quarter before they guided those figures. Meaning, the quarter is likely doing quite well.

Additionally, it was first time in Analyst Day management spent a lot of time talking about new store model, which was originally announced late 2015 and now the model is being rolled out. It still costs the same $250,000 investment to open this new concept but profitability and IRR is much higher at 18-20% and payback period has improved to 1.7 years vs. 1.85 years previously. After that analyst day, bunch of analysts raised price target and Credit Suisse called it “one of the strongest square footage story” in retail space.

All this makes me think the stock is going to pop when reports next week on May 26 and bulls are positioning for this in option market.

On a separate note, there is potential wild card with two regulatory changes coming soon: 1) USDA requiring selective merchants to increase the variety of healthy food offerings which should be seen as positive considering they carry high margins, and 2) Republicans presenting a bill in Congress to change how SNAP Program / Foodstamps allow low income families to buy food and about 5% of total DG sales come from this which could be positive or negative. 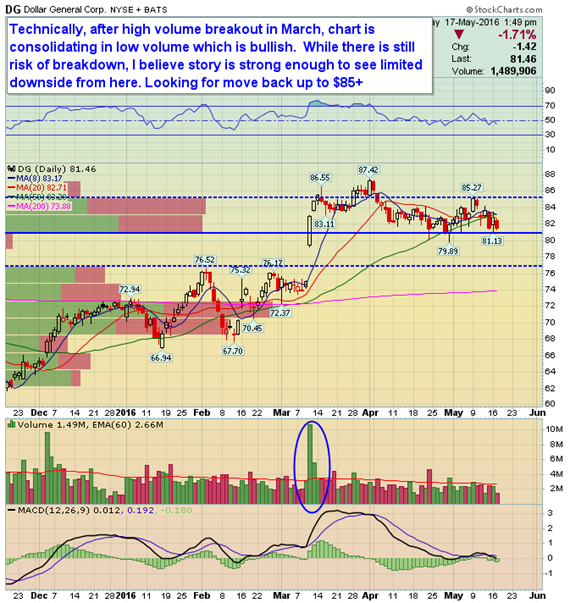