We are following simple logic here. Either Greece gets a bailout package during this ongoing EuroGroup meeting which is now even more likely after Obama/Merkel phone conversation that calls for considering debt relief in exchange for pension cuts. In that scenario, the Euro will get a lift higher as the hangover is removed and the German DAX Index which is down 10% in one months also gets a lift higher. The second alternative is Greece gets no bailout package and they miss the upcoming debt payment to the ECB on July 20. That would make Grexit near certain. In this scenario, while we may see a lot of choppiness in the Euro in the short term, long term it would have to be taken as positive on face value as a weak member gets booted out. Either way with Germany down 10% in one month, we believe various adverse scenarios are priced in or close to it. With that said, we like buying Germany ETF (EWG) here. Note earlier today buyers of 4,500 July (31) Weekly 27 calls paid up to $0.75. 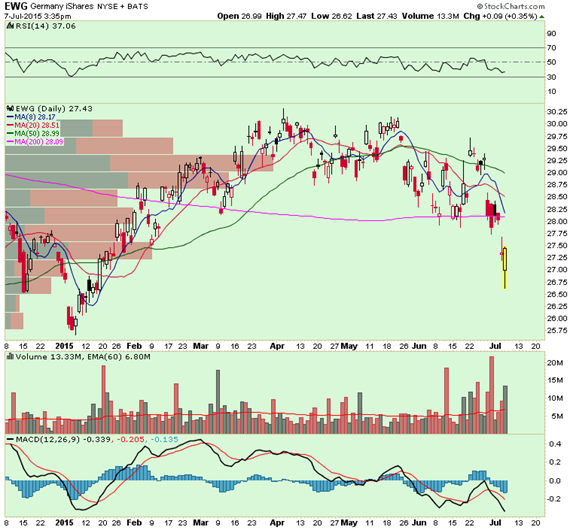