On July 25 the company reported another stellar quarter. Revenues of $107 million +35% y/y vs. consensus of $100 million, driven by a stronger than expected number of sales-type installs in the quarter. EBITDA of $50 million +53% y/y beat consensus of $47 million as IMAX delivered strong operating leverage. EPS of $0.40 was in-line with consensus and a penny below our $0.41 estimate on impact from below the line items. Results reinforced widely expected positive view of continued momentum in the 2015 Box Office.

Despite those strong results, the stock has been steadily selling off since June, down 26% from its 52-week high in just two months. The main reason is the company put aside $50 million in June to fund a brand new IPO for the IMAX China unit. This was a slight shift in strategy as previously many investors had come to believe there would be expansive partnerships with existing theaters in China to push 3D movies. The change in business model led to multiple contraction.

But we believe with stock off 26% from 52-week high, this is now presenting a compelling buying opportunity for the following reasons:

We believe IMAX will be able to continue to execute on its international growth strategy, while benefiting from an improved film slate.

Technically, we are looking for the stock to return back to $34 in short term. Over intermediate term (a few months) we believe the stock gradually climbs back towards $38.50 target. 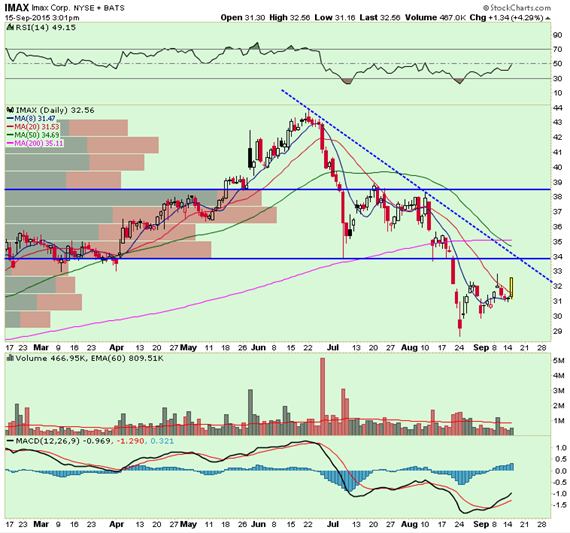