Ollie’s Bargain Outlet (OLLI) – Reports earnings on Wednesday, April 6, after market close. The $1.4 billion retailer that did IPO in July last year still remains largely unknown to investing community despite company consistently beating and raising estimates. This is starting to look like classic example of Wall Street estimates continuously behind the curve. Ollie’s is a retailer of closeouts, excess inventory and salvage merchandise. The Company operates approximately through approximately 185 stores across 16 states. Since the iPO most analysts have maintained Neutral rating mainly due to forward PE valuation in low 20’s, which is considered above peers. But OLLI’s operating model appears to be poised for strong performance in the current retail environment. Sluggish consumer demand (particularly at brick and mortar retail) and a mild winter are expected to improve the availability of closeout deals within the industry. Strong top-line results in Q4 was clear evidence of this trend.

On January 11, After strong +5.6% SSS growth and +19% total revenue growth, street was forced to increase FY2016 EPS estimate from $0.73 to $0.76. Then on February 25, the company provided strong preliminary Q4 results and analysts were once again forced to raise FY2016 EPS from $0.76 to $0.81. The simple reality is the company has only 185 stores in 16 states. Plenty of geographical reach still to come from coast to coast. It is far away from saturation point. Foot traffic continues to expand along with deal flow and access to product from large manufacturers. Company has an attractive defensive growth story, in our opinion. OLLI should be able to consistently produce high-teens-to-20% annual EPS growth as we see a credible unit base buildout opportunity (from 185 stores to ~950 longer term) that, in itself, should drive mid-teens square footage growth annually for the foreseeable future. It is worth pointing out OLLI was one of rare defensive retailers in 2008-2009 recessionary period that poste positive underlying store performance trends (SSS, store unit count, foot traffic, partnerships and product deal flow, etc). 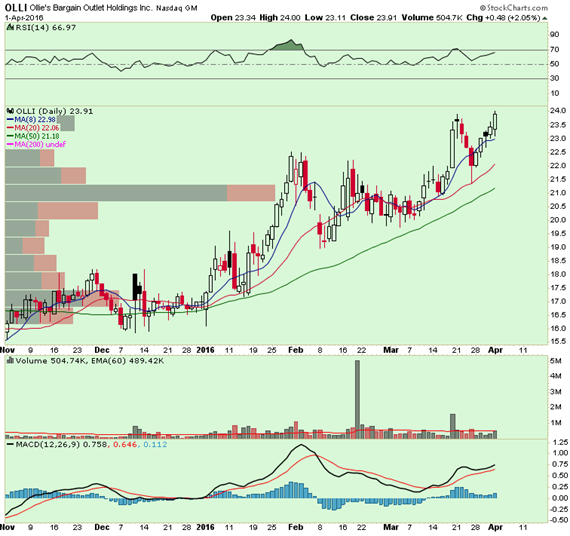