This is a contrarian and more sentiment driven view than fundamentals. There was a time when 3D printing stocks were hot and they couldn’t do anything wrong. Multiples expanded significantly faster than earnings until the music chair stopped and all three big players collapsed and never recovered. There was a time when market forces ignored shale production that was sharply exceeding consumption and oil inventory levels were rising. Shale gas companies multiples expanded to as high as 30x which was never heard of energy space. Then they pulled the rug. Most recently this happened in biotech space. From high level stand point we are now seeing the same happen in selected high growth tech stocks. ANET, DATA, FEYE, N and others.

We believe PANW is at the cusp of similar multiple contraction. We are not arguing against growth in cyber security. The company beat EPS last quarter coming in at $0.28 vs. $0.25 estimate and Revenues at $283M vs. $269M estimate. They are well on their way to pass $1 billion mark in annual sales with earnings expected to be +80% YoY.

We are arguing that multiples across the board in current environment are coming down rapidly. PANW trades at 100x next year’s projected EPS of $1.70. Trades at 14x FY2016 EV/Sales. Yesterday we saw first hint of unusual put buying though it was mostly in short term weekly puts. 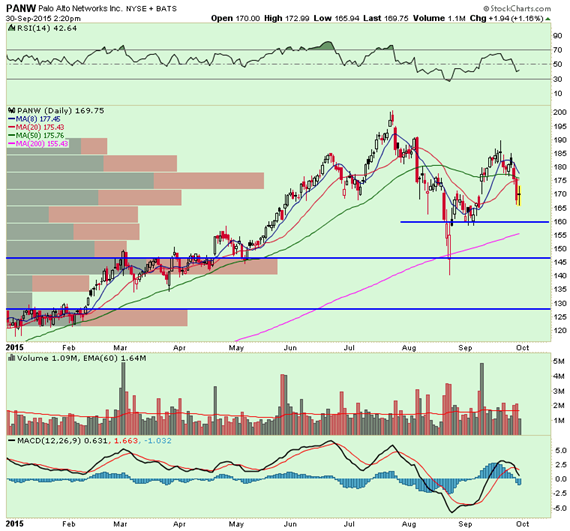