We like how the chart is setting up as it consolidates with higher-lows above the 50-day moving average. We believe it is poised to breakout and the overall sector of consumer staples has been acting well for past two months.

Collecting views from out of box thinking presented by BAML on October 23, fundamentally we believe 2016 growth story is turnaround is not fully baked into earnings estimates. With upcoming launches, easier comparisons, and importantly a clearer strategy to re-deploy cost savings toward brand investment and trial building in some of its biggest categories (i.e., unit-dose laundry pods in new washers, diapers for new moms, razors for men on their 18th birthday), we expect organic sales to improve progressively in FY16 after posting -1% growth in prior quarter. Overall, PG is still a ‘show me’ story for many after two years of underwhelming results, but if mgmt can turn around sales while still driving changes that are leading to triple-digit margin expansion, then the market is getting a glimpse of what P&G can be when execution works.

Compelling Setup – The setup is fairly familiar: low expectations, high dividend yield, underweight investor base, and easing comps. These often make for a good setup for a stock. Gross margin a giant swing factor, which dragged down results by 170 bps last quarter but management guided +176 bps improvement in FY2016 which is not fully baked into published estimates. Valuation range reflects a P/E range of 17.5-18x street CY2017 estimate of $4.64, implying a 15% discount to the current large-cap staples average. Meaning, sentiment is low. The bar of expectations is low which we like at this juncture. 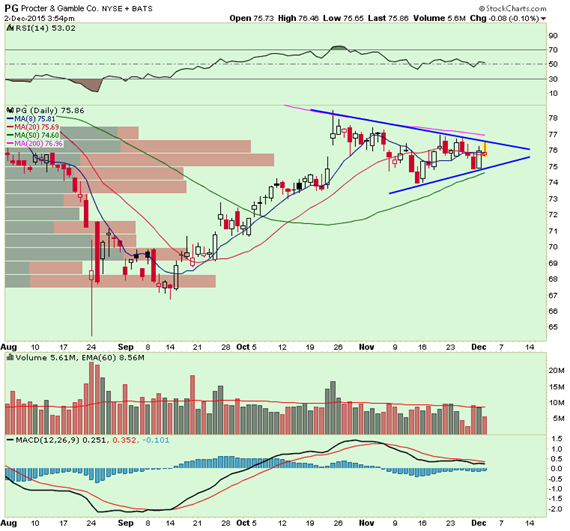