This trade idea was sent to JaguarOptions Pro clients on May 25 with stock at $83, now trading at $94. To learn more about our approach and how you can become a successful trader, sign up for 2 week trial and test drive live chat room with some of the best traders: SUBSCRIBE

Railroad has been a tough sector to get long. I once called a bottom in this group back in August of last year and subsequently made a killing trading calls. But the environment continued to deteriorate for rails with carloads consistently weakening. We cashed out calls with profits and stock fell apart again. But some positive signs are starting to emerge and it is coinciding with better macro data we got through out this week. Last quarter they beat EPS by 6 cents coming in at $1.16 vs. $1.10 estimate while revenues came in line at $4.83 billion. The operating ratio (OR) which is widely followed industry metric was 100 bps better than estimate. Core pricing power was +2.5% YoY, which was still down from +3.5% a year earlier but nonetheless strong considering the state of industry. Total carloads volume are still expected to be down mid single digit percentage in FY2016 but that’s better than -10% decline we have been seeing. If you remove coal freight volume from the picture, the underlying story was actually much better. 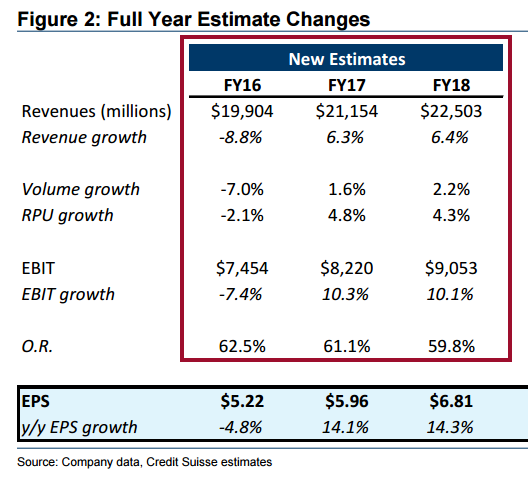 Importantly, given that we’re not seeing the same step function declines in volumes as we were throughout 2015, there are signs of hope with increasingly comfortable scenario of earnings bottoming in 2016. Note UNP has cut a lot of “fat” to navigate the downtrend in last 18 months. 11% reduction in headcount, improved network fluidity with +12% increase in train speed, terminal dwellings down -7%. As a result the company is running very “lean and mean.” Any uptick in macro outlook (which we got last week with better than expected Leading Economic Indicators and New Home Sales) and EPS growth will accelerate sharply for UNP (annual earnings are down from $8.70 to $5.70 in last 18 months).

To give you more fair and balanced view, I am attaching a recent note from JP Morgan yesterday discussing outlook on rail stocks. JP Morgan favors CSX over UNP in this note, mostly based on better cost cutting prospects at CSX. But I will point out that CSX is more levered to coal than any other railroad operator (the troubled child). UNP is more levered to macro and will be first to benefit on uptick in broader economy. 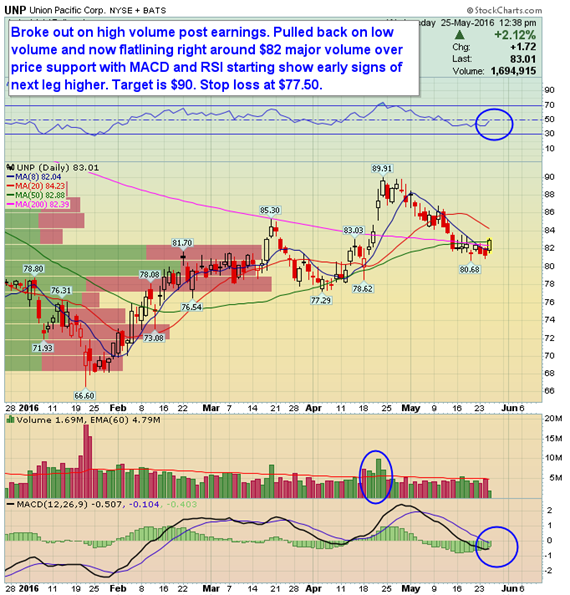