(This idea was issued as Premium trade alert on June 1; Trade was closed today for +100% Gain)

Background – The trade is betting on accelerating fundamental growth rate to push the stock back to a new 52-week high in the coming months.

Fundamentals – On April 28, the $1.1 billion provider of software security systems reported another blockbuster quarter with Q1 EPS coming in at $0.34 vs. $0.21 estimate and revenues at $65.1M vs. $54.5M estimate. It was the 7th straight month of earnings beat with top line revenues posting 68% growth Y/Y. Additionally, management raised FY2015 Revenue guidance to $235M vs. $228M consensus and provided upbeat commentary on outlook.

But it appears Wall Street slept through that report. The quarter went completely unnoticed with no analyst providing an opinion. We believe the primary reason for that is the banking vertical generates as much as 80% of VDSI’s total revenues and nearly 65% comes from EMEA. Too much customer concentration in one sector and potential forex headwinds from a rising US dollar tends to create noise from quarter to quarter.

While that may be true, the simple fact is that VDSI largely remains off the radar with only 3 analysts following (all 3 with Buy ratings) despite its presence in the hot enterprise security sector, and consistently posting 45%+ top line revenue growth. Nor is it expensive relative to peers, trading at 21.9x forward 2016 earnings, which is likely overstating valuation metrics anyway considering the long history of sharp earnings beats since the IPO.

Technicals – After an 8 month consolidation around mid 20’s, the chart is setting up for a technical breakout this summer. The recent pullback post earnings saw the 50-day EMA providing support which currently resides at $24.75. The low on May 7 was $23.65, which we will use as stop loss for this trade, although we think pull backs in VDSI will remain shallow given the growth story gradually unfolding.

Unusual Option Activity – VDSI does not usually see incremental amounts of unusual option activity. The most notable strike is September 30 calls with 1,400 open interest gradually building since early February. The most recent action has been more focused in short term June 25 and 30 calls. On May 12, a buyer of 1,000 June 25 calls paid up to $1.60 and remains in open interest. 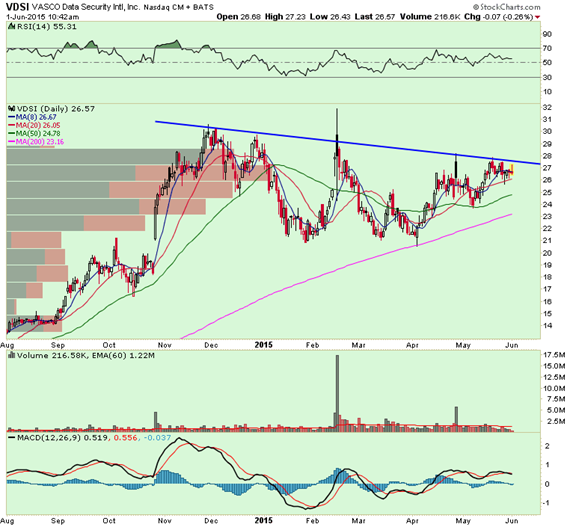