It pays to do fundamental research. We have been very bullish on stock since 2014 recognizing early on the competitive edge in niche high growth market of non-invasive fat burning procedures. Today, Allergan is acquiring Zeltiq for $2.47 billion. Here are last two bullish notes issued to clients in October and December 2016. To learn more about our approach and how you can become a successful trader, sign up for 2 week trial and test drive live chat room with some of the best traders: SUBSCRIBE

Zeltiq Aesthetics (ZLTQ) – Unusual small and aggressive buyer of 880 Jan’17 45-strike calls for $1.40 to $1.85 offer side on wide bid/ask spreads, sharply pushing implied volatility higher by +21% on 3.2x daily average call volume. Stock spiked higher intra-day along with this. Don’t see any M&A rumors in this which makes this action more interesting.

Note Leerink met with management on December 9 and post meeting raised price target from $47 to $55 based on confidence about ample growth runaway for the noninvasive fat burning surgical procedures in which ZLTQ is the leader. I have written about this stock multiple times over the course of last two years.

On top of what we already know and mostly baked into forward consensus view, there are new drivers of growth discussed by Leerink:

“Arm Handpiece (1H17), Cellulite (late-17), CoolAdvantage & CoolMini Still Gaining Traction. The first two represent new indications for ZLTQ, and while the submental (i.e., CoolMini) is not a new modality, our read is that this treatment area may have been a bit overlooked by users in 2016 given that the DTC focus (driving use of cycles to treat the body) may have overshadowed CoolSculpting’s potential in submental. As a result, we still think CoolMini’s adoption runway has significant legs as non-invasive (NI) fat patients move towards other treatment areas beyond the flanks/abdomen.”

“OUS Anticipated to be a Growth Driver in 2017, With China in the Nascent Stages of Adoption. China was highlighted as one market where ZLTQ is just beginning to establish a presence and while the company did not provide any revenue expectations, it’s clear to us that the opportunity is quite large. CEO Foley noted that the Chinese medical segment encompasses ~14K hospitals and 100M consumers and developing the market is likely to require some near-term investments in order to drive KOL usage and secure tenders.”

Previously there were concerns of tough competition from Cynosure (CYNO) but guidance of record quarterly installments of CoolSculpting systems along with simultaneous success of Cynosure’s SculpSure product suggests market is big enough to accommodate and reward both players. ZLTQ growing pipeline of qualified system leads has grown from 2,500 in FY2013 to 4,000 this year. Total Addressable Market size is now seeing at 25,000 accounts vs. 18,000 previously. Consensus projections show reaching only 15% market penetration by FY2018, meaning significant amount of growth to capture in the future. Every 1% incremental penetration into this 25,000 TAM opportunity adds approx $28 million of additional system revenues and this is still highly conservative that excludes multi-system purchases by same customer and services and after market sales.

Here is how consensus sees using “highly conservative” only 15% market penetration, without accounting for up-selling services, without including margin improvement. 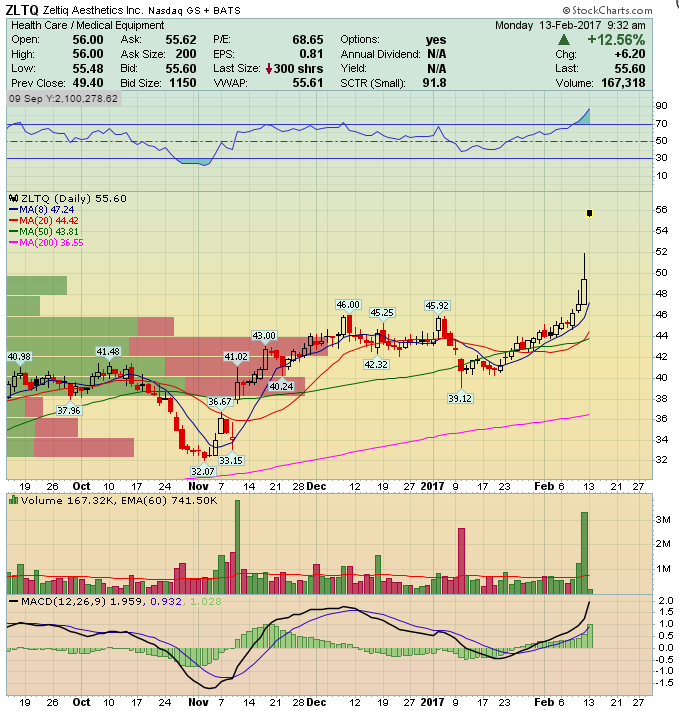