Incorporated in Israel with corporate office in New Jersey, UroGen Pharma (URGN) is a biopharmaceutical company that very recently received FDA approval for its first marketable treatment. The company also has a second therapy in Phase II trial stage: both use proprietary formulations to administer a generic chemotherapy agent locally, using their own proprietary RTGel delivery system. UroGen’s pipeline currently has a couple of other, early-stage therapies being evaluated for various cancer treatment applications.

The focus and design of UroGen treatments is to remove hard-to-access tumors without surgery, avoiding its associated complications.

At the heart of UroGen’s treatments is their novel sustained release hydrogel polymer-based formulation which delivers atineoplastic (medications used to treat cancer) antibiotic mitomycin C (MMC) via urethral catheter to its intended area of treatment.

With its reverse thermal-gelation properties, RTGel is administered in liquid gel form which then solidifies at body temperature. As the chemotherapeutic agent isn’t excreted from the body, it accumulates in the upper urinary tract, increasing its efficacy over time.

Having received FDA approval in April, UroGen’s lead product was launched at the beginning of June. This is also their first therapy to have reached marketing stage. Branded Jelmyto for marketing purposes, UGN-101 is for the treatment of a rare type of cancer affecting kidney and uterine linings. Up to now, the only treatment for low-grade upper tract urothelial carcinoma (UTUC) is surgery that attempts to remove tumors – this usually involves partial ureterectomy and endoscopic tumor resection although due to the complex structure of the affected area, chronic recurrence is common and 78% of patients end up losing a kidney.

Please note in short term earnings is the key catalyst on early to mid August (date not confirmed), considering UGN-101 was approved by the FDA in April and it launched in June.

UGN-101 is the first and only non-invasive therapy for this rare type of urothelial carcinoma. It is the most costly cancer in the US healthcare system on a per-patient basis. UTUC affects approximately 6,000-8,000 Americans each year. 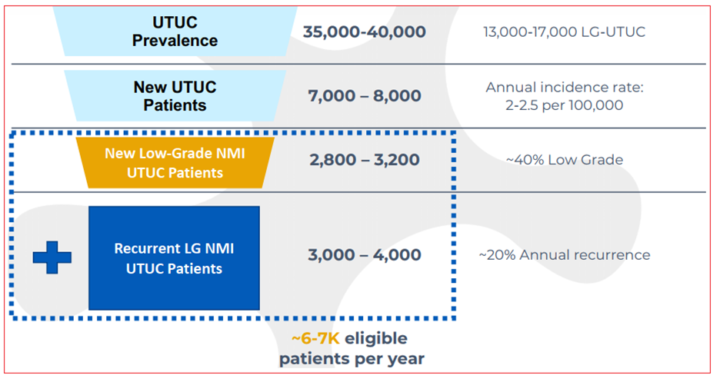 Based on the high efficacy and success of the therapy, UroGen believes that a six-dose course is enough to treat the condition although they added that, ultimately, it is up to the attending physician to decide whether more doses would be necessary. In the event of recurrence, more treatments would be possible. At recent presentations, UroGen’s CEO has said that they expect to “fairly easily” capture 55% of the market opportunity, based on a survey of physicians that showed 70% would be willing to use the non-invasive UGN-101 over interventional procedures. Price has been set at $21,736 per dose, $130,416 for the total treatment. Although this is costly, it is still less expensive versus conventional treatments over the long run as it largely eliminates follow-up procedures and more importantly, greatly reduces the high rate of kidney removal with its lifelong complications. For insurers, the cost savings would be a primary incentive to adopt UGN-101 over conventional standard of care.

In its clinical trials, UGN-101 showed a 59% complete response rate and 84% durability rate over 12 months, meaning that a year later, only 16% had recurrence of tumors. Along with far simpler administration through a catheter, the high success rate of the therapy is driving physician interest in switching from full surgical procedures to in-office outpatient care. 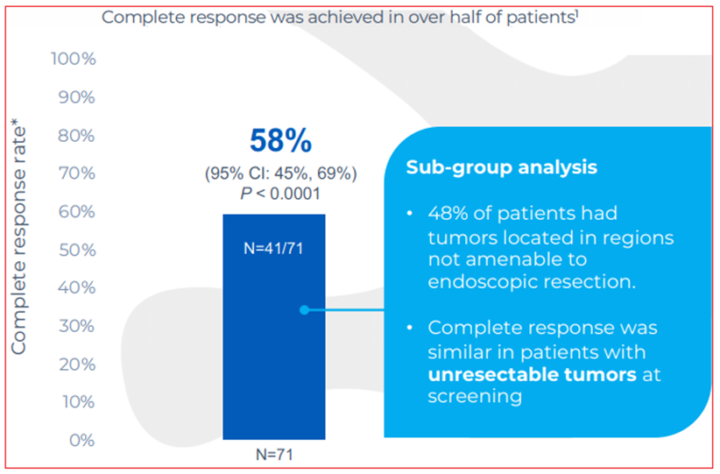 UroGen has applied for reimbursement coding, C-code is expected to be determined in October and J-code by the end of the year. This may affect initial ramp in sales although the company has 48 sales representatives that have been working with physicians to bring awareness to the treatment.

Targeting non-muscle invasive bladder cancer (NMIBC) UGN-102 uses a similar formulation to UGN-101, delivered with RTGel to treat another urological condition that does not have any non-surgical options at this time. NMIBC accounts for about 70% of all bladder cancers and remains a very challenging disease to treat with high rates of recurrence and progression associated with current therapies. An estimated 80,000 Americans are afflicted with this condition every year. 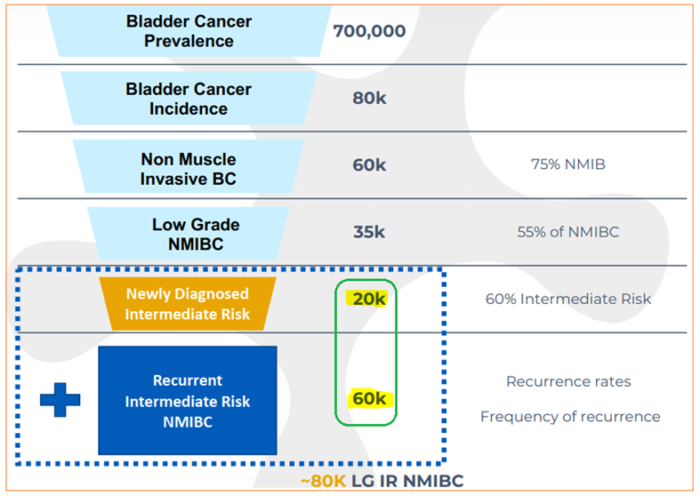 The intent of this therapy is to replace the current surgical method which is transurethral resection of bladder tumor (TURBT). This procedure is performed in a hospital setting as an outpatient with the patient anesthetized. During the procedure, a scope with a special cutting instrument is inserted through the natural channel into the bladder and then the tumor is removed. The resulting area of resection can then also be cauterized by specialized instruments, if needed.

UGN-102 is comparatively a minimally-invasive procedure that removes risks associated to surgery, especially when there are recurring tumors that need further intervention, increasing potential risks to the bladder from perforation. Recovery time is comparatively short and as with UGN-101, this treatment can be one in an office setting versus an operating room and its associated staff needs which increase costs.

Recently UroGen released interim Phase IIb results which showed highly encouraging numbers, as was the case with UGN-101. Complete response was 65% at three months (41/63 patients), and of those patients that achieved complete responses, a very high number remained disease free over the course of a year: 97% at six months, 86% at nine and 85% at twelve months. Safety profile reported the majority of adverse events being mild or moderate and the most commonly reported issues were urinary frequency, fatigue, urinary tract infection and hematuria.

UroGen continues to perform follow-up of patients to assess longer durability data while planning a Phase III pivotal study that will compare UGN-102 directly with TURBT procedures. Management is targeting 2H2020 for the start, more likely the latter part of the year.

In October 2016, UroGen granted an exclusive worldwide license to Allergan (AGN) to research, develop, manufacture, and commercialize pharmaceutical products formulated with RTGel. UroGen will receive milestone payments along the way. Currently Allergan is evaluating RTGel along with BOTOX to treat overactive bladder conditions.

Although at this time management hasn’t expressed concerns over COVID19 related delays, it is possible that UGN-101’s launch could see slower than expected pickup. It could also affect UGN-102 data collection time frame though there hasn’t been any apparent disruption to date.

In early May management had noted that while hospitals were still reluctant to re-start elective or non-urgent operations, ambulatory centers were mostly open and physicians were “eager to use Jelmyto”. Unlike other cancer treatments, hospital visits are unnecessary for UGN-101 application which can be done in an office setting. Nevertheless, this could be a risk in the near-term which pushes demand a little further out into late-summer. However it is also possible that given current situation with less desire to have hospital exposure, both doctors and patients will choose office settings for minimally invasive procedures over the risk of pathogen exposure in large medical centers. 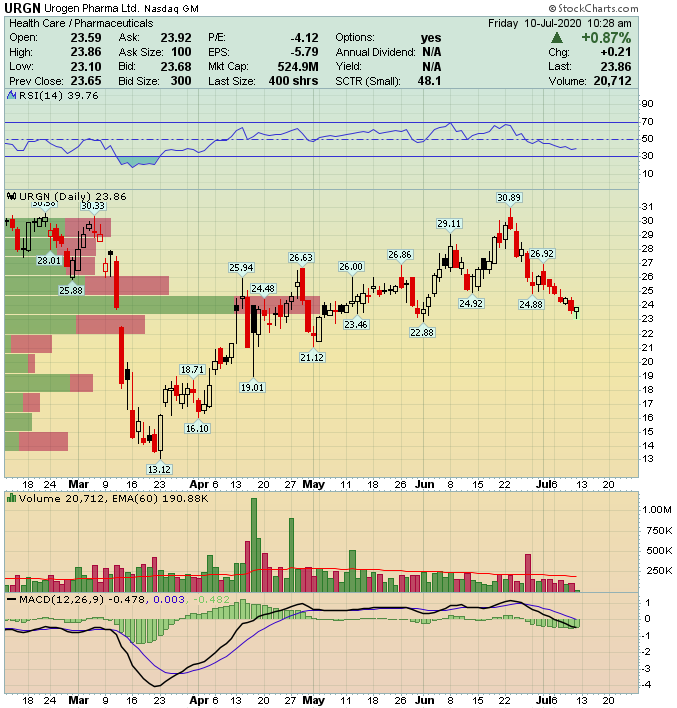