It pays to do fundamental research. This Weekend Research write-up was sent out to Jaguar clients on Sunday, October 9th. Shares are up 20% since and on Friday afternoon, Reuters reported that the company is weighing a potential sale. To learn more about our approach and to see more write-ups like this one, you can sign up for a 4-week trial and test drive all of the JaguarAnalytics offerings HERE.

Ranger Oil (ROCC) is an independent oil and gas company engaged in the onshore development and production of crude oil, NGLs, and natural gas. Their current operations consist of drilling horizontal development wells and operating their producing wells in the Eagle Ford Shale in South Texas. The company sells a significant portion of their oil and gas production to a relatively small number of customers, as is typical in the industry. According to their 10-K filing, for the year ended December 31st, 2021, approximately 48% of their consolidated product revenues was attributable to three customers, each of whom accounted for at least 10%. There were no other customers that individually accounted for more than 10% of consolidated product revenues for the year ended December 31st, 2021. 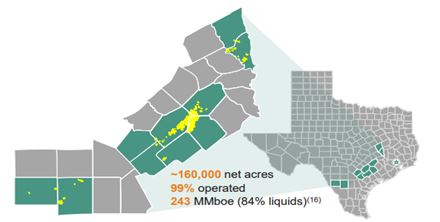 Last quarter’s results included adjusted free cash flow of $62M, net income of $148M, and adjusted EBITDA of $190M. Production once again came in at the upper end of their guidance range. Total sales were about 38,500 barrels of oil equivalent per day while their oil sales were about 27,500 barrels per day. Truist, in their post-earnings note, highlighted that Ranger Oil remains committed not only to building scale but a solid shareholder return program with a new baseline dividend and opportunistic buyback.

With regards to their outlook, management said their capital plans for the remainder of this year fall into two key areas. First, they expect the capital for their initial 2022 drilling and completion program to remain within their original guidance at $425M, which included adding a third spot rig to develop a couple high return pads in LaSalle county. This temporary drilling and completion activity will conclude in the third quarter. And they expect to drop back to a two rig program for the balance of the year. At current commodity prices, we believe these spot rig investments will reach payout in about one year and will be additive to their 2023 forecast.

– FY22 Total Capex was increased by 13% at the midpoint, which is was 9% above the Street.

– FY22 Production Guidance of 41.2 mboepd versus Street estimates of 40.4 mboepd.

RBC Capital, in their post-earnings note, said, “We think there is investor appetite for SMID cap companies that can deliver FCF, have a strong balance sheet, and deliver double-digit organic production growth rates. We believe that ROCC will add a third rig for 2023 and that should provide ~15% organic growth while generating $500 million of FCF at our $114/bbl price deck. At a $90/bbl (WTI) the FCF would be ~$300 million.”

Another topic that was discussed on the last earnings call were the bolt-on acquisitions that “have created significant value.” These transactions which closed late in the second quarter and early in the third quarter added about 20,000 net acres. Combined, their initial purchase price totaled about $139M and were funded substantially through cash flow.

“A healthy deal flow exists in the Eagle Ford today. We’ve been able to selectively screen for transactions, where we see opportunities to lower costs and improve cycle times, to access premium markets and generate free cash. The operational synergies inherent in these transactions mitigate the need for additional rigs and services, thus improving certainty in our cycle times and helping offset inflation.” 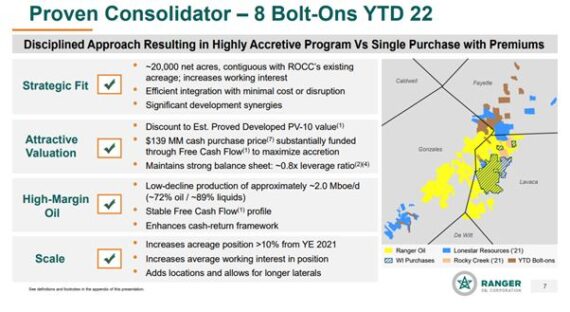 A little over a month ago, RBC Capital analyst Scott Hanold hosted in-person meetings with Ranger Oil CEO Darrin Henke and CFO Rusty Kelley. The analyst came away from meeting saying that the company should delivery approximately 10% sequential production growth in both Q3 and Q4. This will include contribution from a 4-well pad on its SW acreage that comes online around the end of Q3. “These wells could contribute strong flow rates with incremental gas/NGL productivity, which is a tailwind at current gas prices.” For 2023, the analyst thinks the current two-rig pace drives 5-10% production growth, but management is looking to line up a third rig and associated supplies. A three-rig pace should put 2023 production above 50 Mboe/d and amount to 12-15% organic growth. The company has a deep drilling inventory that can support the added activity pace.

One additional watch point will be on the Austin Chalk. The Austin Chalk occurs along a crescent stretching from Maverick and Zavala Counties in South Texas, via Burleson, Brazos and Grimes Counties, to Tyler, Jasper, and Newton Counties in East Texas, before extending further east into central Louisiana (See Map Below). “A good portion of the company’s identified 1,000 drilling locations targets the lower Eagleford using conservative spacing assumptions. Several large operators are testing the Austin Chalk formations around its acreage position, which could add to the inventory depth. ROCC has permitted an Austin Chalk well but likely waits on evaluating results from others before drilling.” 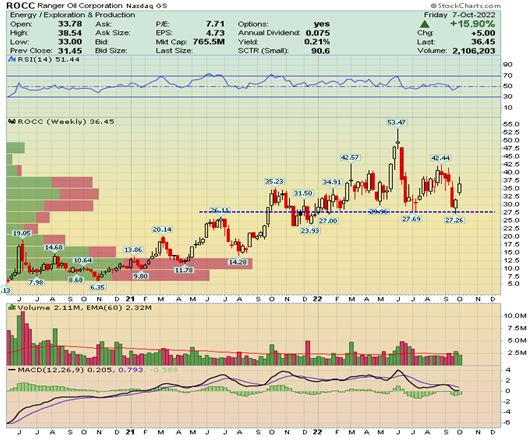