(Note: As part of Jaguar Premium subscription service, each weeknight a number of hand selected stories are delivered to clients discussing individual stocks with detail view on fundamentals, technicals and unusual option activity. This is one of them as an example.)

Alibaba (BABA) – Earnings out on October 27 before market opens. Ahead of that one trader today bought the following bullish combination:

Large willing buyer of 750,000 shares below $68 made a leverage bullish bet with net cash outlay of $675,000 that stock trades above $73.50 after earnings. Nothing gets us more excited when a bullish play shows up along with put sales because it shows conviction, which is the case here. BABA doesn’t have a good history of sustaining gains after earnings. Since the IPO it has released earnings four times. Two times it gapped higher but the rally failed within few weeks. The other two times it gapped lower and continued to sell off. Two main reasons for lackluster performance: 1) the IPO simply came to market at sky high valuation more than any other big cap tech stock, and 2) China slowing growth fears.

In reality, the entrepreneurship that drives decision making in BABA continues to push the limits to enhance its reach in Chinese e-commerce and beyond. There are snippets of small baby steps reported by various journals in China every week that never make their way to catch attention in mainstream media. Here are some of these stories just in past few weeks:

1) Lei Zhu, Commercial Division GM of Didi Kuaidi, disclosed that the company plans to accelerate its monetization process through advertising, O2O and the auto ecosystem chain. Each market is estimated to be over RMB 10 billion in size

2) House of Fraser, a traditional high-end department store in UK, announced plans to expand into China’s ecommerce market via Tmall

There are literally dozens of such baby steps announced every week. BABA continues to expand its reach. No question it has been a horribly disappointing stock for Bulls with deterioration reflecting a collapse in fundamentals that we frankly do not see. We believe the ultimate boil down of these efforts is improved monetization as the salvation and we predict a y/y increase in take rates either this or next quarter, with significant run-way in mobile. When investors sense that inflection point, we expect both forward earnings estimates and valuation multiples will expand dramatically leading to sharp stock outperformance and current market cap of $182 billion will look increasingly in rear view mirror. 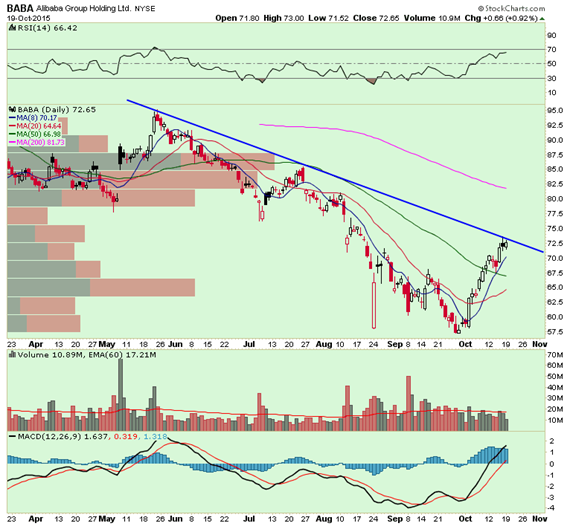