It pays to do fundamental research. This bullish view was first presented in the Weekend Research on September 2 with a bullish view ahead of earnings. The stock was trading at $43.60. 4 days later on September 6, the stock gapped higher after earnings to $50.75 (+16% gain)! To learn more about our approach and how you can become a successful trader, sign up for a 4-week trial and test drive the JaguarLive chat room: SUBSCRIBE

This is a bullish report ahead of the company’s Q2 earnings on September 6th before the open.

A day after earnings were announced, the following analyst commentary started to roll in:

Barclays – Analyst Chethan Mallela upgraded the stock to Equal Weight from Underweight
saying that GIII’s wholesale momentum in recent quarters has well exceeded their expectations
and F1Q19 results imply a F1H-weighted sales and earnings cadence in FY19, which provides
much better EPS visibility than we would have anticipated at this juncture in the year.

Cowen – Analyst John Kernan reiterated his Outperform Rating and raised his price target to $54
from $49 saying the sector remains hot, and the company’s execution across brands and
channel suggests there could be a significant increase to 2019 guidance as the year
progresses.

KeyBanc – Analyst Edward Yruma reiterated his Overweight Rating and raised his price target to
$58 from $45 after Q1 results affirmed his constructive multi-pronged thesis on GIII. The analyst
thinks the company is in the earlier innings of an earnings expansion cycle. Guidance remains
appropriately conservative, but Yruma believes continued operational momentum could drive
additional upside.

Read-Throughs Ahead of Q2

Looking over the earnings transcripts from several retailers, we’ve heard the following positive
commentary from the wholesale channel that I believe will help benefit shares of GIII:

Macy’s (M) – Dresses, among other categories, were called out as a positive. (Dresses make up
18-20% of GIII sales):
CFO Paula Price said, “The strength in our categories was also broad-based across fine jewelry,
fragrances, active, dresses, kids, men’s, luggage and furniture.”

Kohl’s (KSS) – Women’s was among the top performing categories at Kohl’s.
CEO Michelle Gass said, “In the second quarter, we saw sales acceleration across all apparel
categories; Men’s, Children’s, and Women’s. While we are, of course, very pleased with the
broad-based performance across our apparel categories, I am especially excited by the results
in our Women’s business, which outperformed the company for the first time in two years.
Driving sustainable improvement in Women’s has been a key focus of our organization, and
we are now seeing the results of our efforts.”

TJX Companies (TJX) – CEO Ernie Herrman commented, “We were especially pleased with the
very robust performance of our apparel business.”

“From a merchandise perspective, we’re very pleased to see a meaningful turn in the
performance of our Women’s Apparel business this quarter, which as you know, has been a
major effort on our part. The business outperformed the total company comp in the second
quarter.”

Finally, last week, on August 29th, Piper Jaffray issued a note where they reiterated their
Overweight Rating and $49 PT saying they believe wholesale, supported by DKNY, CK, TH, and
CL, should remain strong in Q2. At outlet, trends broadly have been healthy in Q2 with better
traffic (local consumer) as the call-out. DKNY also should be a positive in Q2 where the product
shipped during the quarter was entirely GIII-made vs. last year’s product which was legacy
LVMH product. Furthermore, stemming of EBIT losses for GIII’s GH Bass & Wilsons should drive
upside in both Q2 & 2H.

Reading over analyst commentary, the consensus is that GIII may have a more difficult time in
the back of this year due to the Bon Ton bankruptcy:
Barclays commented that GIII’s guidance embeds a deceleration in wholesale trends during
F2H19 (in part due to the Bon Ton impact), but the recent results and magnitude of GIII’s
outperformance vs. guidance in F1Q19 suggests to us that this could potentially prove cautious.
Piper Jaffray said the biggest negative from their perspective is the loss of BONT shipments
which will weigh most on Q3. 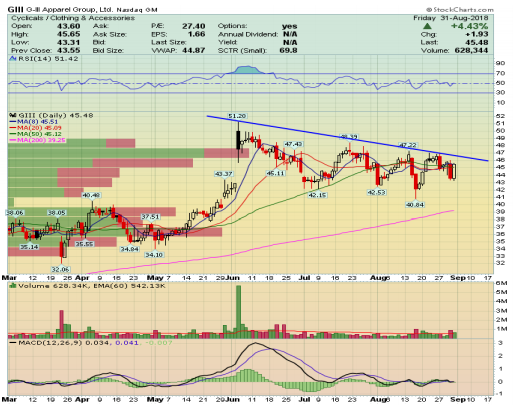