It is worth noting UA has never missed the Street’s sales forecast in any quarter, starting in ’06. That’s quite a statement. Given such long stretch of history, investors have awarded the stock with premium valuation. The gist of Morgan Stanley’s bearish case is evidence suggests this is about to change and multiple compression will continue. Chartology:

1) SportScan data shows -2% Under Armour Holiday quarter apparel sales growth and market share loss. Just because this is negative doesn’t mean it only gets worse from here. Late 2014 saw similar situation, only to result in sharp rebound over next 2 years. 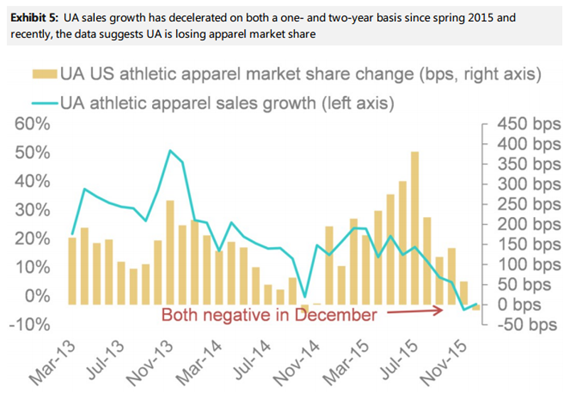 2) UA running footwear prices are down 20% since January 2013, while the industry’s are down just 4%. The fact this is going opposite of Nike and industry trends is concerning. 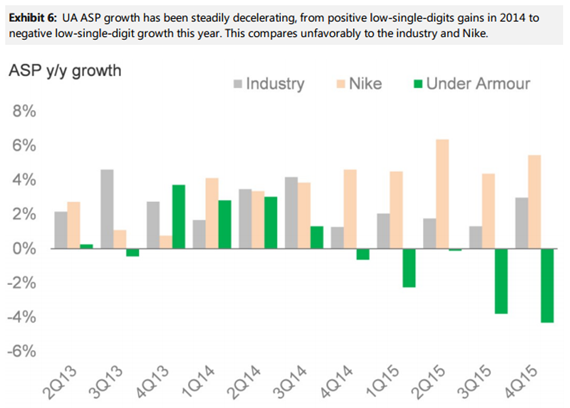 3) Women’s apparel sales growth has lagged men’s by roughly 500 bps YTD with slightly higher ASP declines. Plus, UA has lost only a small amount of share in men’s, but share loss in women’s has been larger and happening for 5 months, while Nike continues to take share. 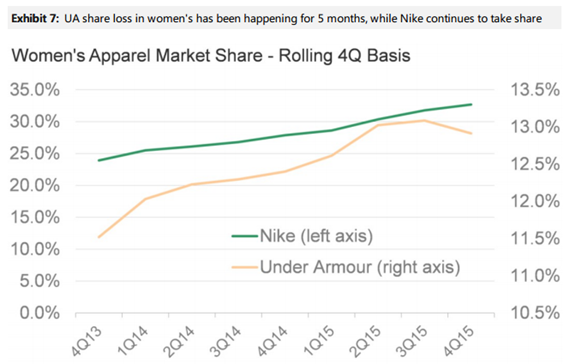 4) Warm weather has played a role in causing an apparel sales slowdown, but this doesn’t explain the majority of it. US sweat/fleece category was +9% in Q4, sharp deceleration from +28% prior year. But then how come Nike’s sweats/fleece business was +23% in Q4 with higher ASPs? Also, why would weather be an excuse for YoY decline in undergarments? 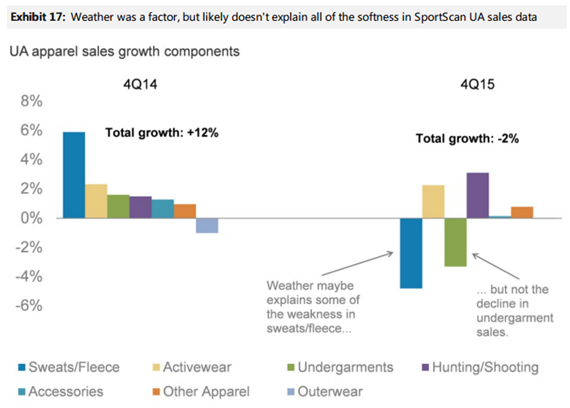 Summary – We think Morgan Stanley raised reasonable questions and management needs to properly address them. Much of inherent weakness appears to be company specific than sector wide. UA’s strong management has shown in the past how to navigate through such challenges. We think they can do it again. In the short term, however, at 50x forward earnings valuation will remain a drag until further clarity.