We have been following the stock closely since Senza FDA approval and launch in summer 2015 and while we have been constructively bullish on the outlook, today’s set of numbers reinforces the view about strong adoption rate among medical professionals and growth momentum that is hard to find in sea of red within small and mid cap sectors.

Nevro is on the verge of a dramatic sales inflection point with FDA approval (in June 2015) of its highly differentiated and superior to traditional SCS therapy – the Senza SCS (spinal cord simulation) system to treat chronic pain in the current $1.4B global SCS market. We see a faster-growing SCS market, with the incremental market growth and share largely accruing to NVRO. Several reasons for this that may not be full understood by the street:

1) Senza FDA approval with a label that includes the pivotal trial data that claim superiority vs. traditional SCS therapies, hence easy adoption rate while Nevro creates the barriers to entry for others.

3) Sharply increasing sales force to ramp penetration into key accounts and beyond. This has been consistent management focal point in earnings calls past two quarters.

4) Potential expansion into pre-back surgery patients a significant long-term opportunity that may be underappreciated by the Street. NVRO is seeing adoption in the current market of predominant leg pain as well, supported by the strong efficacy data and superiority labeling. These new markets are not baked into consensus models.

5) Though management didn’t provide a timeline to commercialization, NVRO is developing a paddle lead which could open up the ~30% of the market that is neurosurgeons vs. anesthesiologists.

Valuation – Stock isn’t cheap at 8x EV/Sales based, especially in current environment where multiples can compress dramatically as weakness in macro data takes a toll on broader market. Small Cap Med Tech universe generally goes for 4x to 5x EV/2016 Sales Estimate. The difference is growth and opportunity. We believe NVRO can grow at 52% CAGR through 2019 vs. Med Tech peers at 19% CAGR. We expect 2015/2016/2017 sales ramping higher as $69M/$150M/$225M, respectively. 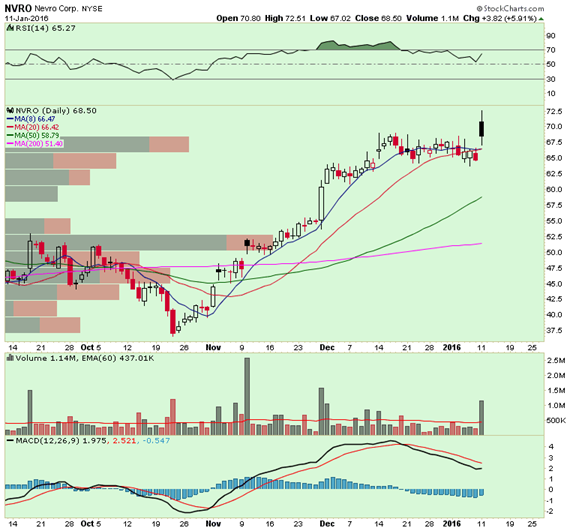