Spero Therapeutics (SPRO) is a multi-asset, clinical-stage biopharmaceutical company focused primarily on new antibiotic formulations and also on improving existing antibiotic effectiveness via their Potentiator platform. Founded in 2013, their IPO was in November of 2017. Spero’s market cap is around $185M.

Of four clinical-stage products in their pipeline, three are expected to provide trial updates in 2H2019: 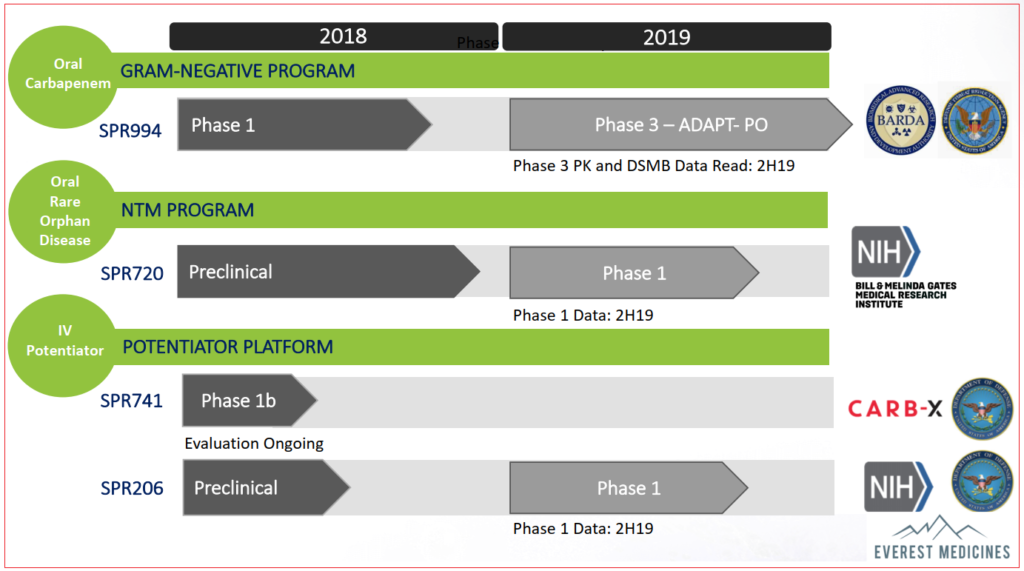 Currently undergoing Phase III randomized, double-blind evaluation, SPR994 is an oral therapy of tebipenem for complicated urinary tract infections (cUTI). Tebipenem isn’t an altogether untested product itself, it has been marketed in Japan since 2009 under the brand Orapenem for common pediatric infections such as pneumonia and sinusitis: however this is an intravenous delivery whereas current trials are for oral administration.

SPR994 is Spero’s lead product candidate which to date has yielded encouraging results in Phase I and II testing: if approved by the FDA, this medication would be the first carbapanem-class antibiotic for the treatment of multiple-drug resistant Gram-negative infections. Although carbapanem-based treatments have been available for over three decades, serious bacterial infections require intravenous administrations up to three times a day, each lasting two hours long.

In preceding testing phases, no serious adverse events (SAE) or treatment emergent adverse events (TEAE) were reported, nor were there any premature discontinuations. ADAPT-PO Phase III trial with patients having 18 or more years of cUTI history is intended to demonstrate equivalency to IV administration which would be supportive of approval by the FDA.

In addition to carbapanem-class treatments, SPR994 could also be used in place of fluoroquinalone-based therapy to which bacteria have developed resistances by mutating proteins found in cell walls. Carbapanem’s mechanism of action differs by targeting the bacteria’s ability to properly form a cell wall. Management believes that SPR994’s formulation could capture 40% or more of the market where fluoroquinalone is ineffective. 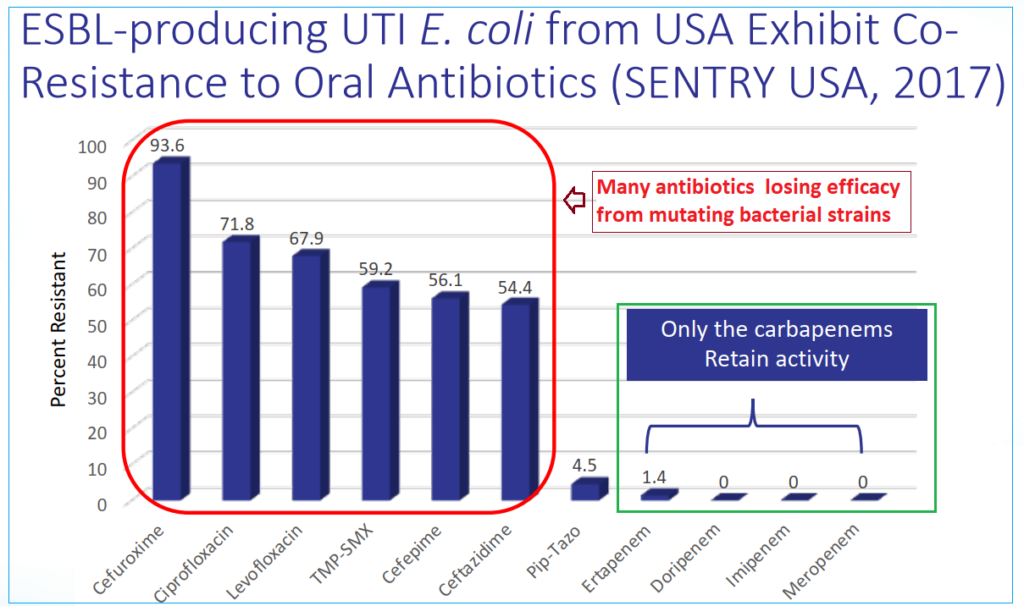 One of the two Potentiator Platform products currently being developed, SPR206 is intended to improve the efficacy of existing antibiotics against Gram-negative bacteria by disrupting pathogen’s cellular structure. The development is a collaborative effort with Everest Medicines, a private firm. Pre-clinical testing was supportive of further studies and Phase I data is expected by the end of 2019.

Recently, Spero received a $5.9M grant from the US Department of Defense in support of further clinical development of the therapy.

Intended for the treatment of pulmonary non-tuberculous mycobacterial infections, SPR720 is being tested as an oral antibiotic. To date, pre-clinical trials demonstrated promising results on which further testing was initiated. SPR720 has garnered interest from large funding sources, a recent collaboration with the Bill & Melinda Gates Medical Research Institute being one of them. The philanthropist couple’s non-profit biotech organization partnered with Spero to further development for the treatment of mycobacterial tuberculosis. In exchange for funding, the Gates Institute will maintain an exclusive license to manufacture and commercialize SPR720 in low and middle-income countries worldwide.

Additionally, Spero entered into an agreement to sell up to $10M of common stock to Novo REPAIR Impact Fund, part of Danish multinational pharmaceutical Novo Nordisk’s holdings. Half of the $10M was recently invested at $10.73 per share with the remainder to be applied either on the announcement of lead-in pharmacokinetics data for SPR994’s ADAPT-PO trial, or on June 30th 2020, whichever occurs first. The proceeds will be used to fund continued studies. 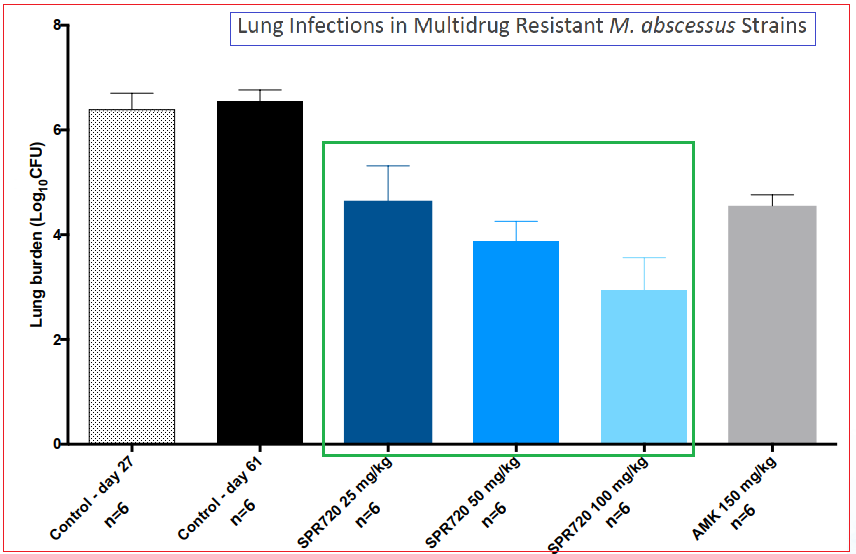 Although Spero Therapeutics is sparsely covered by analyst firms, consensus is bullish:

Spero Therapeutic’s antibiotic therapy development has garnered interest from multiple interested sources as they progress with success through testing stages. Technically, shares have also fared well through two secondary offerings and sharp market pullbacks and appear to be looking ahead to steady upward progress on positive results of 2H2019 catalysts. 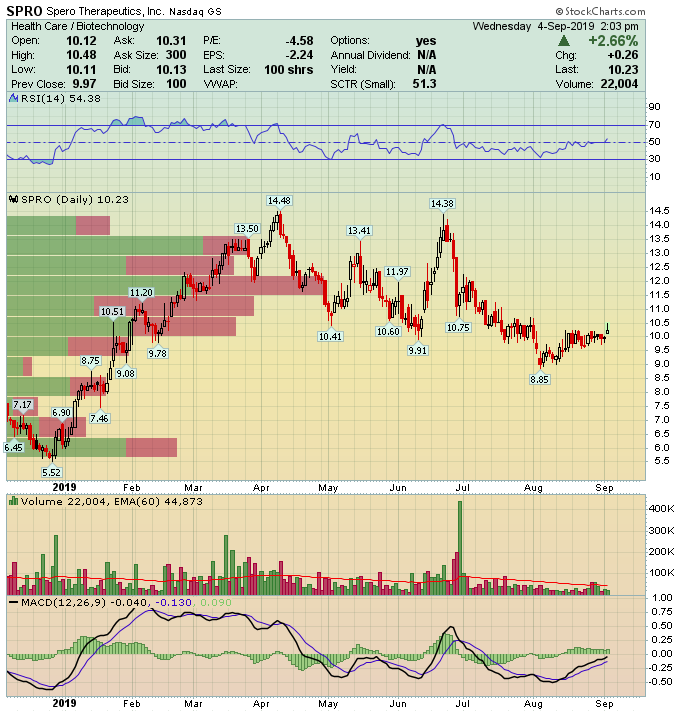