This Invisalign manufacturer will be reporting their earnings tomorrow, Wednesday, after the close and recently, we have gotten recent survey/diligence checks.

To begin, Stifel analyst Jonathan Block was out last Wednesday with his Q4 Survey Diligence note where he “continues to see a favorable setup.”

In Q3, Align reported +29% worldwide case volume growth with trends strengthening throughout the quarter and momentum continuing into October. This momentum persisted into November (per their 11/23 Analyst Day comments), and based on this information they believe that October and November worldwide Y/Y case volume growth may have been in the mid-to-high +30% range. “In our 4Q20 diligence, we asked current providers about their 4Q20 Invisalign case volume versus 3Q20. The sequential growth was +9% versus what we believe is consensus closer to flat to +LSD (among current Invisalign providers only). When we quantify what this may mean for 4Q20 case volumes, we arrive at ~550,000+ cases versus our current 512,092E. This 550,000+ case volume figure would represent solid upside to the Street, in our opinion, and low-30% y/y growth.” 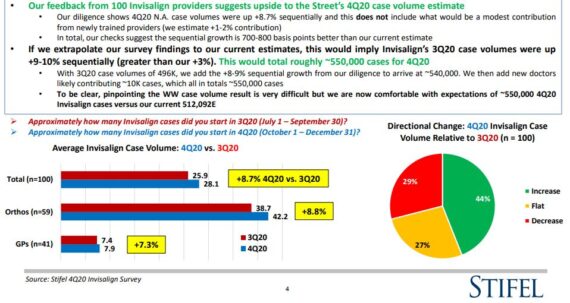 Additionally, their checks show the impressive uptake of Invisalign First over the past couple of years, which has surprisingly exceeded that of Mandibular Advancement. Importantly for Align, Invisalign First is a Phase 1 solution, and Stifel’s diligence shows that Orthodontists expect the vast majority (~80%) of these patients to return for Phase 2 treatment specifically with Invisalign. This creates a type of Invisalign First backlog, which is poised to be brought onto the P&L in the next 12-24 months. “For example, if 80% of Invisalign First Phase 1 patients return for Phase 2 specifically with Invisalign (per our checks), the total realizable ASP of that patient is arguably $2,149 (the $1,149 Phase 1 lab fee + 80% of $1,250 Phase 2 lab fee). However, only 55% of the revenue has been realized so far as the balance essentially sits in backlog. On the 4Q19 conference call, Align estimated that they have performed 32.4K Invisalign First cases to date (+455% y/y in 2019).” 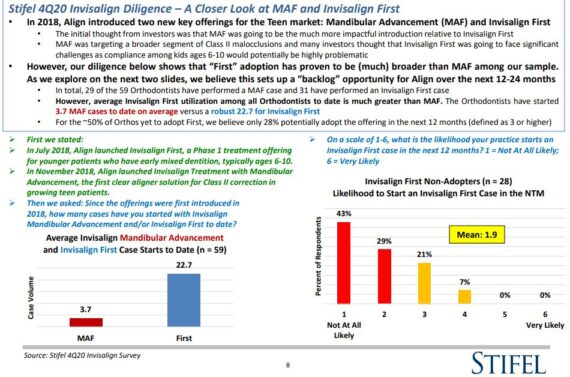 Back on January 20th, UBS analyst Kevin Caliendo was out with a Clear Aligner note that focused on survey results from China. It was back in mid-December when the UBS Evidence Lab surveyed 102 Chinese dentists and orthodontists who were already prescribing clear aligners. China currently represents roughly ~8% of ALGN’s total revenue, and they view the China market as a leading indicator for the Rest of World trends given China came into and through COVID months ahead of other key markets. “Traditionally for ALGN, the fourth quarter in China has shown a sequential q/q decline in revenues, but this time around, respondents noted patient volumes were tracking 5-10% above seasonal norms. Survey participants said they are starting nearly 47 new clear aligners cases per month now versus 16 in June 2020 and 26 in December 2019, and expect aligner volumes to grow 26% in 2021.”

Also, while these aren’t channel checks, an interesting development took place late last week that will be worth monitoring going forward. There was news that its main competitor in China, AngelAlign, filed to go public in Hong Kong last Friday. AngelAlign is ALGN’s primary competitor in the country. A couple of data points presented by UBS:

-AngelAlign believes they are the clear aligner market leader in China, with 41.3% share of case shipments (totaling 101,700) through nine months of 2020. Aligh was second with 41.0%. AA said they had 17,300 dentists served in China at the end of September vs the 7,500 they estimate ALGN had at the end of December.

-AA said they expect to expand their offering globally post the IPO to take advantage of a clear aligner market that is expected to reach $51B in worldwide sales by 2030 (according to CIC).

Finally, the other market I’ll highlight is Brazil, which management, at its most recent Analyst Day in November, repeatedly stated that it expects the country to become its #3 Invisalign market in the next couple of years. Brazil is one of the largest aesthetic markets in the world and also has 3x more Orthodontists than the U.S. Meanwhile, management estimates over 1 million annual orthodontic case starts in Brazil, and Invisalign is less than 1% penetrated. Stifel would add: 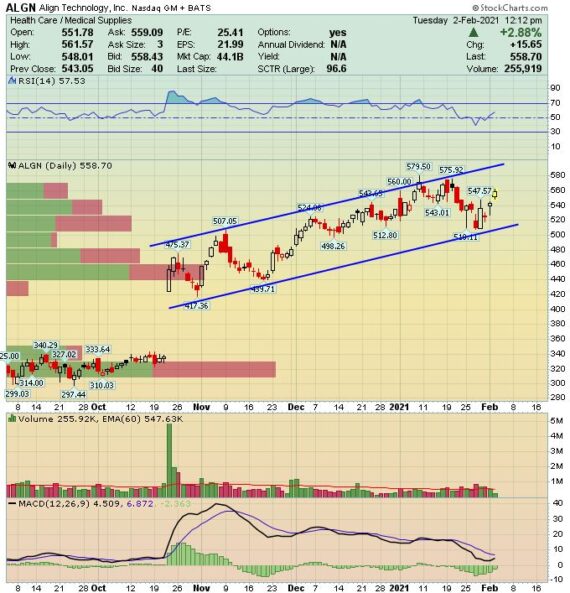