Note: This bullish idea was originally shared with Pro subscribers on April 29th, via JaguarMedia. Click HERE for more information on Pro subscriptions.

This stock appeared on our radar recently, after the company did a share offering on April 16th, and insiders proceeded to buy some on April 20th:

Upon taking a deeper look, this appears to be a company in the execution stages of a multi-year transformation plan, at a time when commodity tailwinds are in their favor. If management can carry out the remainder of its plan successfully, then this is a multibagger. Conversely, this stock could take an outsized tumble should they fail. There is asymmetric risk-reward here in owning the stock, much akin to a lottery ticket.

What is PHX Minerals?

PHX Minerals is a formerly struggling oil and natural gas E&P that used to go by the name of Panhandle Oil and Gas.  They are currently executing a strategic pivot from pure production to a “perpetual full-mineral ownership royalty” business model. Essentially, the company decided at the beginning of 2020 that it wanted to transition away from being a producer, and would focus instead on acquiring and owning oil and gas acreage inventory and lease it out via a non-cost bearing royalty. After taking advantage of the pandemic to acquire prime location assets from distressed producers, the company now has more than 70% of their mineral assets ready and waiting to be leased, at a time when US oil production is starting to recover. Hence, to mark the occasion of turning over a new leaf, management decided on the name change: 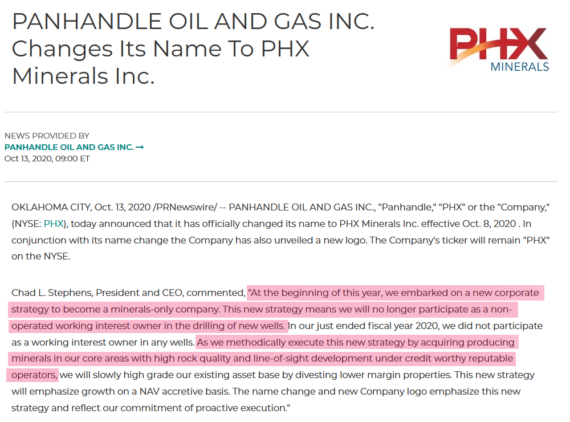 Those aforementioned acquisitions in the past several months have been a bargain. Back in August, the company closed on two packages covering 795 royalty acres in the SCOOP and Haynesville plays for $6.9M. Then in October, the company closed on royalty packages in Grady County, OK, and Panola, TX, and Nacogdoches, TX for $5.75M. Shortly after, they purchased 134 mineral acres of a 16-well pad in San Augustine County, TX, for $750K, while signing an agreement to purchase additional minerals overlapping the same well pads for $1M. 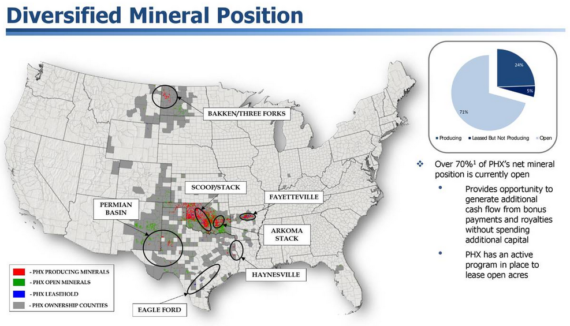 Within Texas and Oklahoma, PHX’s acreage is heavily concentrated in and around the SCOOP/STACK plays with 986 wells on production and 893 undeveloped locations.  Largest oil and gas operators within its areas of operations include Marathon Oil (MRO), Devon Energy (DVN), Ovintiv (OVV), and Cimarex (XEC). The company is also building its Haynesville interests, starting with 12 wells in progress across 326 net royalty acres in San Augustine county. They also have ~6.4K of undeveloped mineral acreage in Cochran (Permian Basin) plus ~7.5K in the Real and Edwards counties.

Speaking on the February 8th earnings conference call, VP of mineral operations Freda Webb said they have started to see signs of a production/capex recovery in those specific regions:

“Commodity prices have had a nice rebound since the lows of last summer. This has helped certain plays, including SCOOP and STACK exceed their economic threshold, which is allowing operators to allocate development capital to these plays… The majority of the wells brought online are in SCOOP region. At the end of the quarter, we had an additional 120 gross, 0.62 net wells in progress, up from 115 gross, 0.51 net, as reported at our prior earnings.

The majority of the wells in progress are in SCOOP, STACK, and Haynesville regions. Even though rig activity in and around PHX is slightly down on a quarter-over-quarter basis, we have seen an increase in our inventory of wells in progress, which is encouraging for volumes in the upcoming quarters.”

CEO Chad Stephens and CFO Ralph D’Amico would add that the company’s royalty volumes were already in the positive YoY after factoring the aforementioned acquisitions, and the only reasons why this wasn’t reflected in the earnings report were administrative:

“We think based on the data that we’re seeing on the wells that are online, they’re doing well. They’re exceeding in many cases, exceeding our projections. I think if we actually included all the volumes from the acquisitions that we think we are or we know we’re receiving, the royalty volumes instead of being down 4% probably would have been up in the magnitude of the low-to-mid-single-digits.”

“Once you close on these acquisitions, you have to get the transfer documents, the assignments, the mineral deeds to the operator. And typically, the operator takes, their land department can take anywhere from four to six weeks to incorporate the changes into their records, division orders, getting their pay decks changed.”

Looking at the rest of PHX’s portfolio:

Ultimately, this is a multi-year transformation plan, and we expect PHX will only see the bulk of its efforts come to fruition beyond 2021. After all, new leasing activity on open minerals will need time to fully recover as operators focus on drilling acres under existing leases. However, as suggested by the insider purchases, we believe significant price appreciation in PHX stock could begin to occur this year as the market tries to front-run the sharp improvement in cash flows that’s to come if natural gas and oil prices continue to stay elevated.

Considering that a fast-growing portion of revenue is derived from royalties (clear of all costs of development, operation or maintenance), and assuming we eventually return to pre-COVID production levels, PHX could theoretically be a net cash company by 2023 if operating cash flows exceed the $21M reported in 2019, even after accounting for dividends. At 1.0 times book and 1.2 times NAV, we could potentially be looking at dramatic re-rating if management successfully executes the remainder of their repositioning strategy. This is a lottery ticket without a doubt, but it’s one worth taking a chance on. 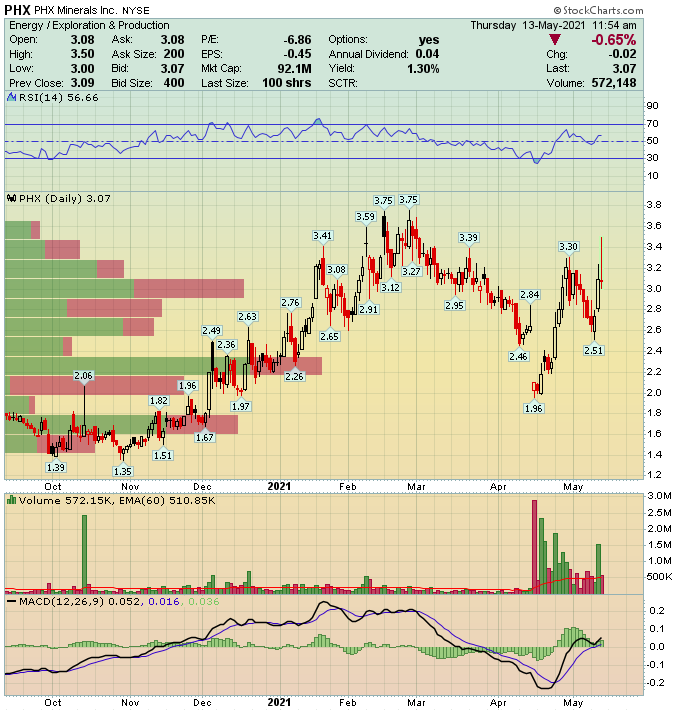