Tempur Sealy International (TPX) – With new CEO Scott Thompson at its helm, the Kentucky-based mattress manufacturer and distributor will release 2Q earnings before market open on July 28th. Analyst consensus is for $0.69 EPS and $785.4M in revenues. Last quarter, TPX beat EPS by 6 cents, $0.68 vs $0.62 but had lower-than-expected revenues at $721M versus $773M. CEO Thompson stated that they were pleased as they “grew adjusted EBITDA 15% and adjusted EPS 24% while increasing direct advertising and marketing investments…..Overall, plant operations improved and adjusted operating margin expanded 200 basis points“.

Mr Thomson joined TPX in September 2015. Most memorably, he was the CEO of Dollar-Thrifty and took that stock from $1 to $87.50 when Hertz (HTZ) bought it out. In restructuring Dollar-Thrifty, Thompson overturned the cost structure, resulting in operating margin increase of more than 200%. In addition, EPS, ROE and ROIC more than doubled and all without top line (revenue) growth.

Typically, mattresses get replaced on average after seven years of use. 30% of BAML proprietary survey respondents indicated theirs had reached that age while 15% reported theirs had seen decade or more of use. 40% also said they would spend more than $1,000 for a mattress. It should be noted that there is a slight cyclical abnormality in that 2008-2009 were recession years after the US housing crash.

Mattress replacement also follows housing start and consumer confidence indexes. Both of these statistics have been steadily improving, helped by decreasing unemployment and nearly two million foreclosure-related, seven-year credit score black marks that have come off the books. A lot of major cycles run seven years.

It’s exactly what it sounds like it is: a bed, in a box, delivered to your door. Or in the case of TPX, you have the option of picking it up at one of the many large retailers that carry their mattresses (Macy’s (M), Costco (COST),  Sleepy’s (MFRM) and others).

Over 50 bed-in-a-box companies now offer consumers specialty foam mattresses to be ordered online, with a 100-day trial period and money back guarantee. Tightly compressed and rolled into a box, all sizes are sold and prices vary from $550-$950 on average. Not to be outdone, TPX offers their own version called “Cocoon by Sealy” that can be ordered online.

Will this put an end to traditional coil spring, or even memory-foam beds? With present market share at 2-3%, it is highly unlikely. BAML looked at competing retailers Casper, Leesa and Tuft & Needle  and determined that while their marketing has been very good, the lack of product selection (one mattress only, each) would limit market share. Surveyed buyers have also mentioned their preference of trying a bed in person before purchasing one. BAML theorizes that these outlets would start competing with each other as they offer, essentially, the same product. 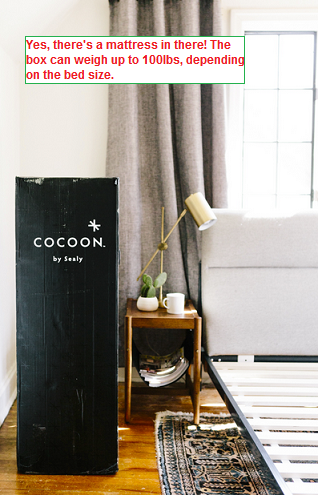 Company insiders started buying shortly after the 1Q earnings in April. Purchases have been large as well, totaling slightly over $3.5 million, with new CEO Scott Thompson acquiring $1 million of stock in May. Last insider sales activity was prior to 1Q earnings.

Bears have consistently increased their positions and the short float as of July 15th’s reading stands at 27.94% with 9.3 days to cover. A positive earnings release could very well start a short-covering rally. 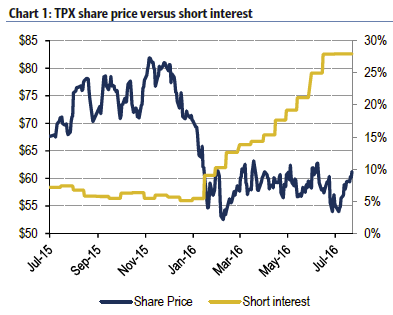 Options are plentiful and very liquid.

After its 30% decline in late 2015, TPX has traded mainly within a $7 channel, building a very large base at the $59 level with Buy volume building over the past four weeks. It is at its 6th attempt at breaking through the $63 level and the next overhead resistance is at $70. Timing would be impeccable with an earnings beat.

Having been range-bound for nearly all of 2016, TPX shares could react very bullishly to a positive earnings report. As we saw last week with Whirlpool’s (WHR) rise in light of the most recent Industry data, TPX may may be a beneficiary of renewed consumer large-ticket replacement spending. 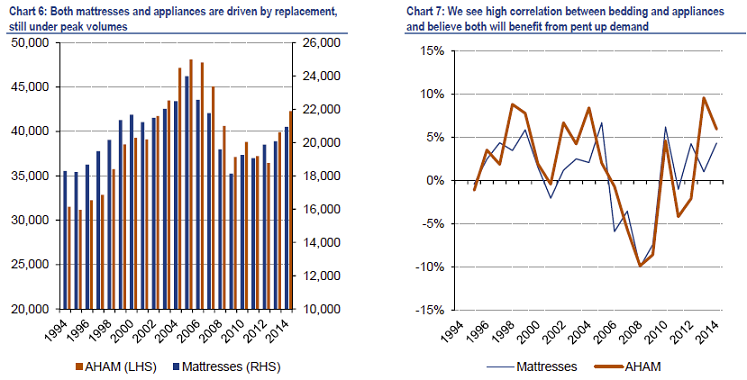