It pays to do fundamental research. This bullish view was presented to clients on April 11 with the stock at $17.75. Although we sold at $31 on June 4 for +75% gain in 2 months, the stock has continued to run up to $40. To learn more about our approach and how you can become a successful trader, sign up for a 4-week trial and test drive the JaguarLive chat room with some of the best traders: SUBSCRIBE

We usually do not recommend buying common but in this we are going to do just that as official trade alert.

Several years ago I wrote an detail note about Baidu and all the moving parts of Baidu that make up the company including search, shopping, streaming service, cloud, AI, etc. The one thing that stood out was IQ which is the Netflix of China. This business spun off on April 1st and I have been waiting for it for a long time. Now it is finally here.

This $2.6 billion company has 50.8 million paying streaming subscribers in China, or about 45% of Netflix worldwide, yet trades at 5% of the valuation of Netflix.

About 421.3 million monthly active users and 126 million daily active users. On average each paying subscriber spends 1.7 hours per day per user on the platform, more than twice the second biggest provider of streaming content which is Tencent. In F-1 filing with SEC at the time of IPO two weeks ago, company disclosed:

), one of the first high-budget original internet drama series in China that we released in 2015, generated more than 100 million video views within the first 24 hours of debut and over 4 billion video views in total. Since 2015, we have released several award-winning multi-genre original titles, such as The Mystic Nine (

), which two titles in aggregate have generated approximately 13 billion video views. We also pioneered and produced a number of internet variety shows that are highly popular, such as Qipa Talk (

), released in 2014 and currently in its fourth season, and The Rap of China (

), each of which has generated over 3.0 billion video views. Leveraging on our initial success, we have extended selected popular titles into multi-season format.”

I like the growth, the disconnect in valuation vs. peers and future growth prospects from continued build out of original content in China. In your spare time, it is worth reading F-1 Filing with the SEC, click HERE. 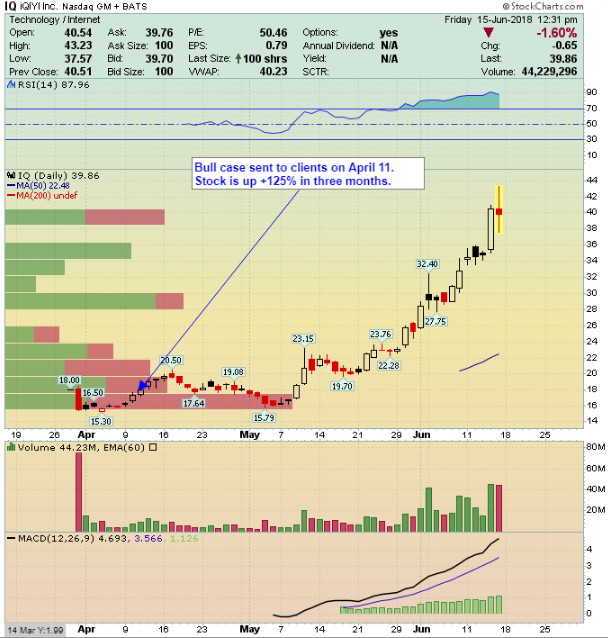