Taking a page out of Morgan Stanley research on May 27 with an upgrade to Overweight on better than compelling risk/reward balance with price target of $83. Before we dive in further, here are a few notable observations from recent option activity:

Additionally, plenty of upside call buying and put selling have been observed in July and October since late last year. Much of it still remains in open interest. TAP is one of those stocks that has been consolidating in a tight range between $70 and $80 for well over a year, yet the bullish bias continues to build significantly in the option market.

Fundamentals – Despite mixed outlook with beer volumes generally under pressure for overall beer industry, TAP has been able to grow earnings at a long term rate of 4% annually due to better than expected domestic trends in craft beer. At estimated $4.11 EPS power in 2016, the stock currently trades at 17.8x forward earnings with a  2.3% dividend yield. That’s a discount compared to Anheuser-Busch (BUD) which trades at 21.8x forward estimates in line with industry average. This is despite the fact that TAP generates significantly better Free Cash Flow yield than its peer group and strategic optionality (as described below) will only further increase this disconnect. See following two charts: 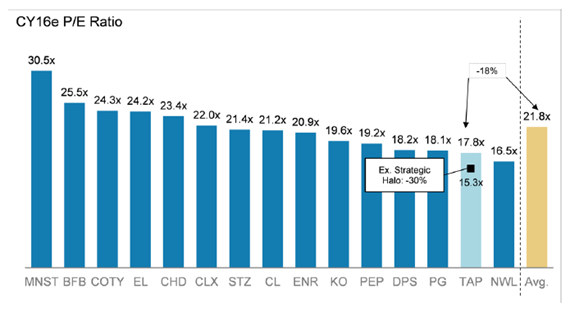 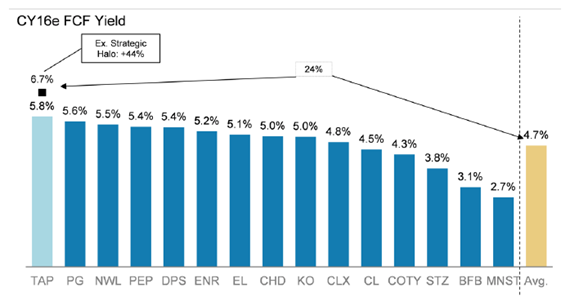 Strategic Options – The true upside scenario in the stock will come from strategic potential that is not fully reflected in the consensus view. Here is Morgan Stanley’s view on May 27:

“If ABI were to acquire SAB, as continues to be postulated in the financial media… ABI could divest SABMiller’s stake in its JV to TAP to satisfy antitrust concerns. In this scenario, we estimate 42% EPS accretion for TAP, which at a 17x P/E, would represent $29 in value per share. This scenario could be quite positive for TAP given substantial potential EPS accretion, improved certainty around FCF (low integration risk as TAP already has a JV stake in the US) vs. TAP’s subpar historical acquisition track record, and greater exposure to the more attractive US region with higher margins/profit growth than TAP’s corporate results.”

Here is how that scenario plays out graphically: 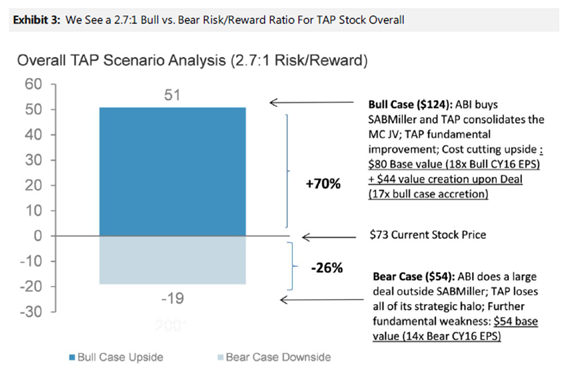 Financial Impact – So, as we can see, when we bring the strategic option into picture, the upside bull case becomes highly attractive relative to the downside scenario. Note the large assumption here is that the combo of TAP and MillerCoors 50% JV stake would result in as much as $2.25 in cost synergies or 19.4% of total sales. That takes TAP FY2016 EPS power from $4.11 to $5.81. Apply a decent 17x multiple on that and you get an upside stock price target as high as $98. In reality the full control of Miller franchise could further boost multiple at least back to industry multiple of 19.6x, in which case target goes to $114 per share. And this is essentially the logic why speculating on such an outcome via long term upside call options makes sense with the stock currently at $73.

The question still remains, what are the chances of such a scenario playing out? Let’s look at some recent media coverage:

March 3 – Bloomberg reports AB InBev Need for SABMiller Mega-Deal is growing. SABMiller CEO tells Bloomberg that the case for ABI/SAB combo could be made for a tie-up, even though it would likely require divesting some US operations to get around an anti-trust issue. That’s where TAP comes into play. SABMiller CEO:

“You could get the numbers to work. There would be value loss and value destruction because they’d know that they’d have to sell the U.S. though.”

Bloomberg, WSJ and Financial Times have opined on the topic multiple times since summer 2014 while quoting various sector experts in favor of such combo. We believe where there is smoke, there is fire.

Biggest Risk to Bull Case – The key risk is outside of strategic options coming to fruition, there are not strong enough bullet points to materially boost the stock higher. The sentiment will remain focused on 1-2% annual decline in US beer volume growth, offset by price increases and cost cuts to boost margins. Those efforts on their own should be enough for the stock to attract buyers, but upside will likely remain limited as the case for multiple expansion remains muted. 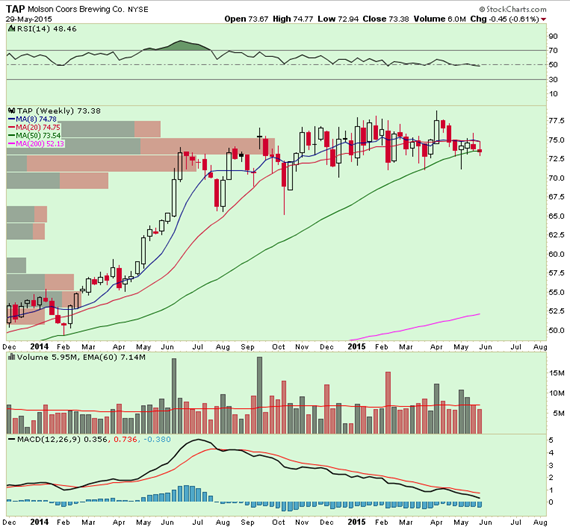