Last week QCOM sparked fresh new upside call activity with buyers of 4,000 October 57.5 Calls for $0.98 as implied volatility that day finished higher by 9.5%. Call buyers were active in other months as well. It is also worth noting that Jan’16 $60 Calls have seen steady accumulation in the past 3 weeks with open interest rising from 8,500 on August 27 to over 19,000 as of this morning.

Here is a note from Morgan Stanley that sheds light on recent developments:

“Keeping replacement cycles steady key for QCOM. We think that the most significant threat to Qualcomm’s long-term earnings power is an elongation of the handset replacement cycle. We estimate that since 2007, the overall handset replacement cycle globally has lengthened by as much as 50% (See Exhibit 1). And a key risk factor for Qualcomm has been that it would continue to lengthen. Generally, we have estimated that the relationship to Qualcomm from a change in replacement cycles is quite linear, e.g., lengthening by 10% would tend to reduce earnings by about 10%. Apple’s new leasing program, whereby a lessee would be able to opt for a new handset every year should help reduce the lengthening pressure.

For Qualcomm, there is clearly a negative drag created by the sale of used phones, but not one that more than offsets the positive impact. That drag is created by losing a new phone sale to a used phone sale. If we take the case whereby a leasee opts for a new phone after 24 months (roughly in-line with the typical high-end replacement cycle), we estimate that there would be roughly $129 in residual value (see Exhibit 2). If the sale of that used phone were to displace the sale of a new $150-$200 phone, that would result in lost marginal earnings contribution of as much as $10-$11 to Qualcomm. Obviously the positive impact to Qualcomm is determined by what the consumer would have been willing to pay for a new phone when instead opted for a used one. Higher displaced value equals less positive impact to Qualcomm, or lower displaced value equals more positive impact to Qualcomm. We estimate that about 20-25% of Qualcomm’s current profitability comes from mid-tier phones.” 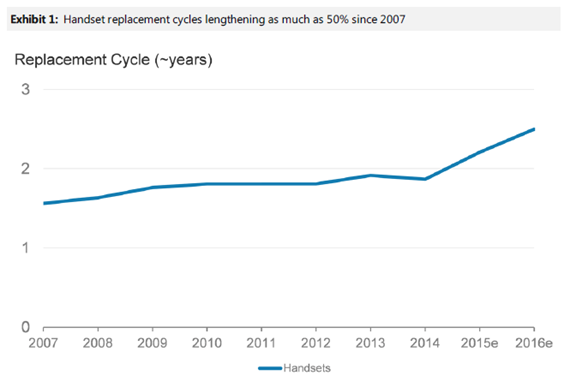 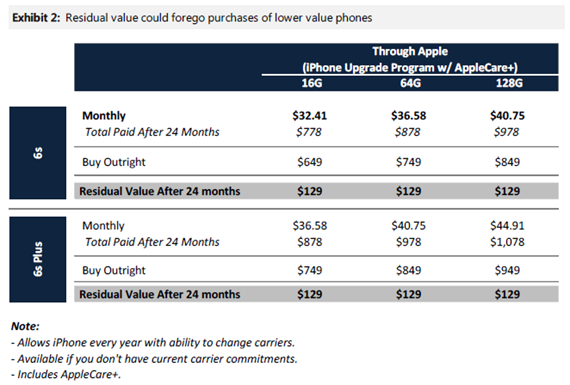 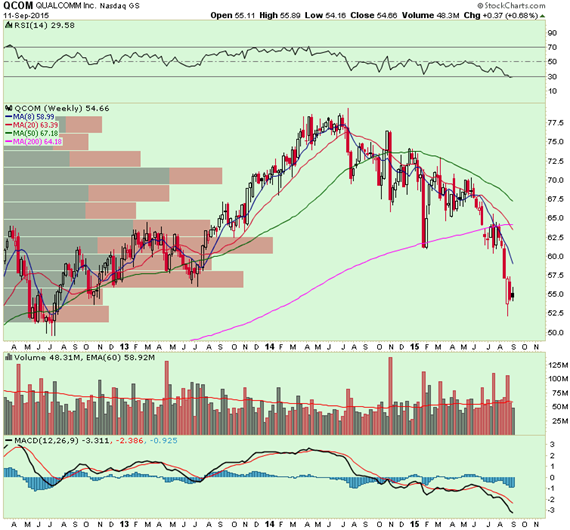