Around The Globe – Aritzia (ATZ.TO)

**This write-up was originally sent to Jaguar clients on October 16th as part of Weekend Research. To see more notes like this, please subscribe HERE.

Aritzia (ATZ.TO or ATZAF) is a Canadian-based design house and fashion retailer of women’s apparel brands. It designs apparel and accessories for its collection sold under the Aritzia banner, as well as selected sub-brand banners (Wilfred, Babaton, Tna, etc).

Shares were up nearly 6% on Thursday after they released their Q2 earnings. Management highlighted that net revenues came in at $526M, which was an increase of 50% Y/Y while achieving comparable sales growth of 28.3%.

“This outstanding growth was the result of several factors. First, the company continues to see exceptional growth in the United States, with net revenue of $263M in the quarter, an increase of 80% Y/Y. Business in the United States accounted for 50% of net revenue in the second quarter compared to 42% last year and 29% two years ago. “This sustained momentum reflects the significant acceleration in our U.S. client base, as more clients discover and become loyal to the Aritzia brand.”

Second, their retail revenue in the quarter came in at $352M, an increase of 60% Y/Y. This was led by exceptional comparable sales, as well as outstanding performance in their new boutiques, which continue to exceed sales and payback expectations. More specifically, management said that they opened three new boutiques in the quarter to a tremendous client response, two of which were a new market Orlando, Florida, and Atlanta, Georgia. They also opened in Palo Alto, expanding their presence in Northern California, where they now operate four boutiques.

BMO Capital, in their post-earnings note, highlighted that while Aritzia has been in the U.S. since 2007, recent demand continues to be unprecedented. “Clients are responding extremely well to Aritzia’s boutique experience, e-commerce offering and product assortment. Store network growth is focused on new markets in the U.S., providing a long runway for network expansion (opportunity for >100 stores, vs. 43 today) as well as complementary e-commerce growth. Management reiterated its intention to open larger stores, which deliver similar sales/sf as existing locations.” 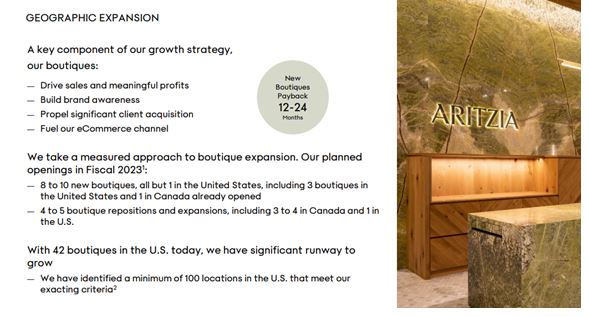 Turning to their outlook, management said the positive momentum in the business has continued into the third quarter. They now expect net revenue for the third quarter to be in the range of $565M to $590M, representing an increase of approximately 25% to 30% compared to last year. This reflects continued strength in the United States across both retail and e-commerce channels, as well as a strong recovery of their business in Canada.

Finally, during the Q&A session, Stifel GMP analyst Martin Landry would ask if management could talk about the consumer. “There’s an economic slowdown going on right now in Canada and the U.S., but it looks like it’s not having any impact on your sales. I was wondering if you can talk about what you’re seeing, if you’re seeing any changes in the patterns of consumption for your consumers.”

CEO Jennifer Wong would respond by saying, “As we reported, what’s driving our business right now are new clients. And essentially, it’s new clients that love Everyday Luxury. So we are not seeing anything changing right now in terms of average order values, basket size, conversion rates, all of our business right now is being by traffic and the high demand that we mentioned in our in our prepared remarks. So unlike maybe other businesses that are seeing signals in their transactions, we are not. But that said, we are closely monitoring it, but we believe that based on the sales momentum that we’re experiencing that we actually have a very strong robust future ahead of us.” 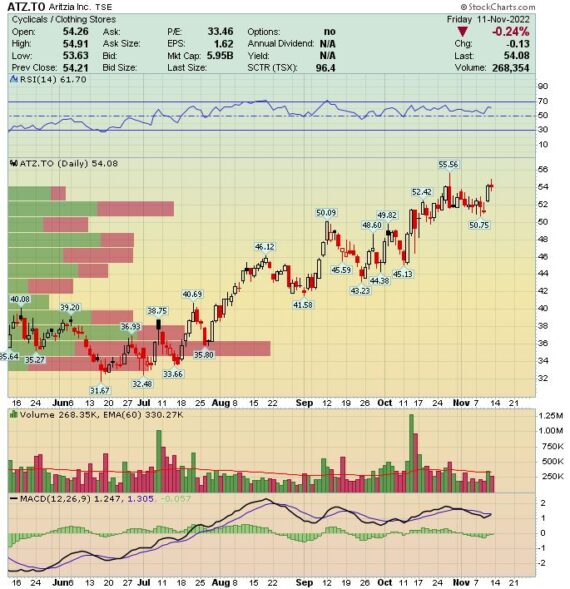