CytoSorbents (CTSO) – Prepared for the Storm

CytoSorbents is an immunotherapy company specializing in blood purification to control or reduce deadly inflammation in critically-ill and cardiac surgery patients. Its main product is CytoSorb, which is designed to reduce the “cytokine storm” that could otherwise cause massive inflammation, organ failure and death in common critical illnesses such as sepsis, burn injury, trauma, lung injury, and pancreatitis, as well as in cancer immunotherapy. 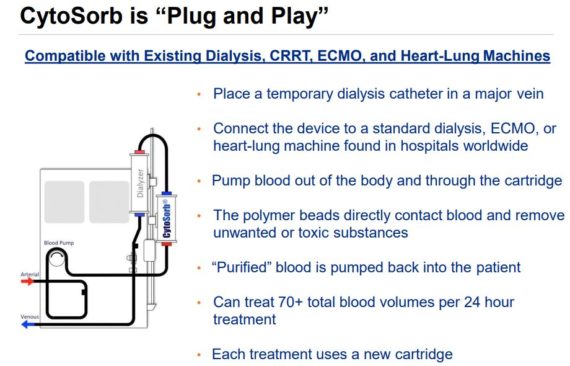 Back in early May, when the company reported its Q1 results, it highlighted that it achieved/delivered >88,000 CytoSorb treatments, up from 61,000 a year ago. As a result, total revenue grew 68% while product sales grew 78%. CFO Kathleen Bloch would add that they entered the second quarter with a sales order backlog of approximately $2.7M, which they believe positioned them well for sales growth in Q2.

In a note last week, B. Riley FBR analyst Andrew D’Silva would remind investors that during this same call, CTSO’s management noted it expects Q2 product sales to exceed Q1 levels which caught B. Riley by surprise as this was one of the few times CTSO has provided any revenue guidance for a particular quarter and they now believe this was due to the meaningful momentum CTSO experienced in the first few weeks of Q2.

The meaningful momentum the company has seen is a direct result of COVID-19 and critically ill patients (Please note that this product will not destroy or remove the virus. It is simply used to treat COVID-19 patients and its symptoms). The company even said that it materially increased its manufacturing output and has been running near full capacity, which represents approximately $80M in annual sales or ~1.5k CytoSorb cartridges per week, for much of Q2.

As a result, B. Riley believes estimates (theirs and the Street’s) which call for Q2 consolidated sales being only fractionally higher than Q1, at $8.9M and $9.3M, respectively represent a low bar, particularly when one considers management expects to convert its backlog during Q2. “As a result, it’s easy to imagine CTSO’s revenues topping $14M this quarter, and that only applies the $11.5M of demand/revenue experienced during 1Q20 to 2Q20, then adds $2.7M for the conversion of its backlog. We believe this could be a conservative way to think of demand, as CS was only used to treat ~70 COVID-19 patients during during 1Q20, which has increased to 800+ YTD, and, on average, each patient utilizes ~3-5 cartridges.”

Going back to product momentum, there have been numerous reports from Q2 that back the story up. For example:

-In April, CytoSorb received Emergency Use Authorization (EUA) from the FDA for COVID-19, atop being utilized in dozens of countries internationally.

-In May, Biocon, one of India’s largest biotech companies which has exclusive commercialization rights to CytoSorb in India and Sri Lanka, received approval from the Drugs Controller General of India (DCGI) for the emergency use of CS in critical COVID-19 patients.

-A couple of weeks ago, the company announced the commercial launch/immediate availability of CytoSorb in nine Latin American countries, which B. Riley views as timely as cases of COVID-19 recently began to increase across the region.

While the company is clearly benefiting from COVID-19 YTD, B. Riley thinks the downstream benefits will be more impactful for CytoSorb adoption in the long run as the success in treating COVID patients is resulting in increased physician awareness of the product and the various indications/symptoms it can treat while also putting a spotlight on the need to improve care for those indications/symptoms. Meanwhile, the CytoSorb product is also in a position to benefit with new hospital/health system customer wins which is a big deal since selling into the channel is a slog, relative to other life science end markets. 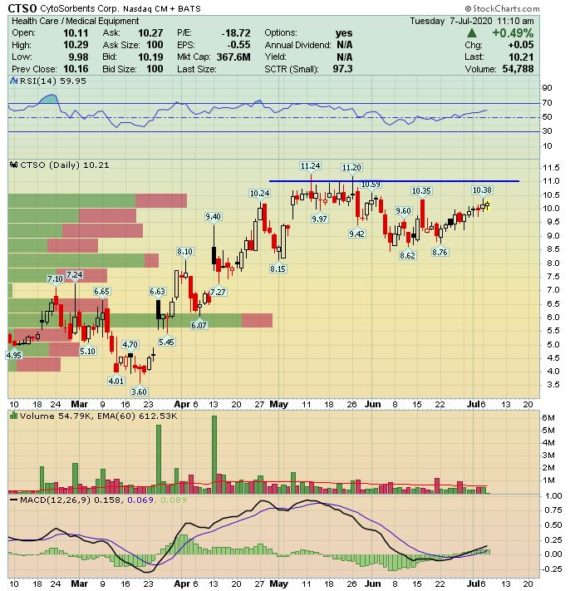